What: It's dragon boat racing time of year, and the focus of the photo is the two dragon boats in the foreground.

Who: Foreign dragon-boat teams are a recent invention, so the people in these dragon boats are Chinese. Unfortunately the photo isn't sharp enough to show whether or not the rowers still wear their hair in the queue style. That would have helped pinpoint the date.

If you look carefully, about half-way along each boat is a man standing up, dressed in white. They're the drummers, who'll set the pace for the rowers throughout the race. They're both holding sticks, and were drumming away when the photo was taken.

But there's no sign of any racing - in fact most of the rowers are facing the wrong way! Are the drummers warming up the crews for the race to come? or just providing some background music while they wait?

Where: The seller marked the view as North Point. Maybe, but does the distant skyline look right for that? What's that peak above the 'W' of the watermark?

The photo book 'A Century of Hong Kong Island Roads and Streets' has another photo that points to the same area. It's on page 84, with the caption 'People gathered on the Tsat Tsz Mui (or 'Seven Sisters') beach to watch dragon boat races in 1932.'

The best landmark is that factory with chimney in the background, but I haven't seen it before.

Other clues are the low, rocky promontory on the right, and the three piers we can see along the shoreline, each with a large matshed building where the pier meets the shore.

Hopefully you'll recognise them, and let us know which part of Hong Kong we're looking at.

The peak above the 'w' watermark is Devil's Peak, Lyemun (Kowloon Side).

I think the area is Tsat Tsz Mui, North Point looking towards today's Tong Chong Street and Taikoo Place, Quarry Bay which would make the chimney and factory the Taikoo Sugar Refinery.

Is this the same view, no Idea when it was taken ;-) 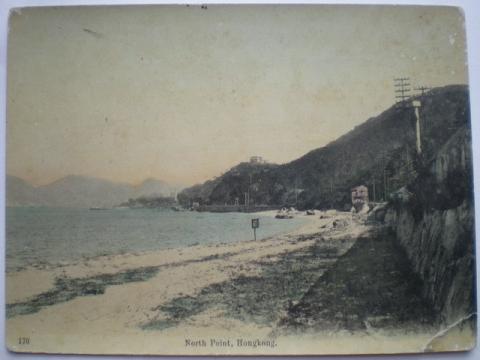 Where was it? You said the best landmark was the "factory" with chimney in the background.  I am guessing here, but if it is indeed North Point that we are talking about, that building was most likely to be the Government Supplies Depot in Oil Street (and not a factory).  At least the resemblance is there.  The hill behind it would be Braemar Hill?  That's my 2-cents.

The approximate location of it should be the strip of present day King's Road between Heathy Street West and slight past the location where Java Road joins Kng's Road.

Back in the 1960's there were still swimming pavilions in the sea shore in the present day location of the East Harbour Tunnel, what we call the 麗池 (Lai Chee swimming pavlions.  They looked similar to the ones in Kennedy Town, near the squatters.

I think T has it right on this one.  On the approximate site of what he calls 'Lai Chee swimming pavilions', is now the Ritz Gardens Apartments.  Lai Chee 麗池, of course, is how Ritz is translated into Cantonese.

Check it out on a map, the angle of the sea view (and the mountain across the harbour) from Ritz is an exact match with the photo here.

The Ritz entertainment centre comprising a restaurant and dance floor, soda fountain and bar, large swimming pool and later outdoor skating rink came much later and was opened on 28 August 1940 in the general area where it is mentioned the Ritz Apartments are located.

The scene of  North Point Beach (Tsat Tsz Mui) is similar to this and David's photo: 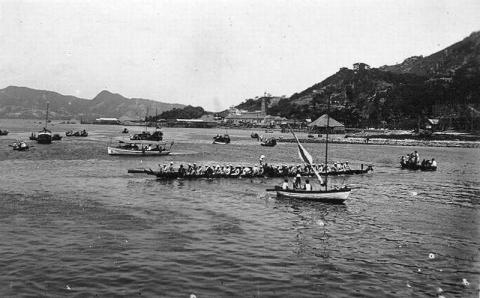 P.S. on the map may indicate that the chimney and building was a power station 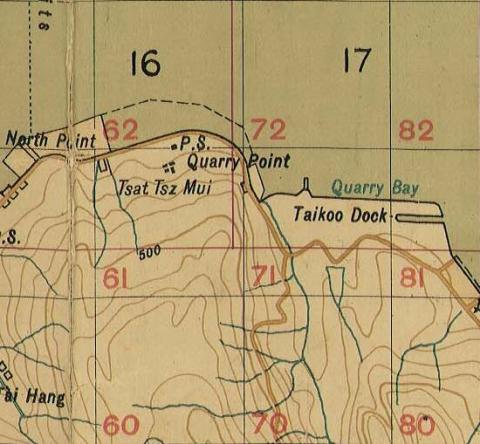 Thanks for all the help. Here's a map summary of the comments (markers & lines may not be visible in IE browser - try Firefox to see them):

Good work on the mapping. Makes me wonder now what the chimney and buildings were?

I guess we could not rule out the possibility of the photographer was on a boat out there.

Re: 1922 Map and Chimney and Buildings

Been looking at maps of the area.

Answered my own thoughts. The P.S. stands for Police Station. On the 1922 map, the location of  Quarry Point does not appear right and should be further east towards the eastern end of Tai Koo Docks. Braemar Point would be more correct.

As for the chimney and buildings, I found a reference to Tsat Tsz Mui Government Quarry in July 1934 for a tendering exercise for the erection of new crushers, screening, asphalt plant and compressor housing and demolition of the old plant.

re: Location of photographer

Moddsey's photo shows more of that stone promotory on the right. I can't make out if it was natural, or part of the North Point reclamation project.

I'll see if the 1964 Aerial photo book could give a little bit more clues as the swimming pavilions were still there in the 1960's.

Hi David regarding the picture of the Dragon Boat. You asked What, Who, When and Where? Having a close look at the crew I would like to ask WHY is the crew, at least most of them, facing the wrong(?) way? They are facing the stern! They must be an English crew!! LOL!!!

Apparently the Ritz Apartment blocks were already there back in the 1960's when the aerial photos was taken.  The swimming sites had moved together with the coast line seaward, but eventually they ceased to exist in the late 1960's or early 1970's.  I could not recall the exact dates though.

Thomas, thanks for checking. We still don't know much about this area - the only other Place I can think of that's nearby is the Metropole Hotel from the early 20th century.

Hmm... the Metropole Hotel..... but that would be some five to six city blocks away from Ritz.  It is still possible though, as five blocks is a very short distance if you are on a vehicle or on a boat. 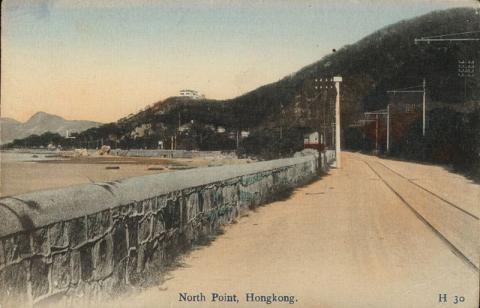 80skid, thanks for the new place. That puts the various incarnations of the Ritz  on the far side of the headland we see in the original photo above, and so out of sight.

Perhaps the swimming pavilions moved over to there when the Tsat Tsz Mui beach was reclaimed in the 1930s?

Thanks to Stephen Davies for the following comments:

What’s interesting is that there is an unholy pile up of dragon boats (which I suppose may be why the shot was taken). The dragon head on the extreme right is coming at almost right angles across the bow of the next boat leftwards. My hunch is that whoever it is thinks this place is the same as in http://gwulo.com/node/7676 is right on the money and I’d put more money on the photos being of the same event – so 1920s-ish.

On the small maplet posted, "P.S." I think stands for pumping station, so the place with the chimney is a pump house, though what for is uncertain.

In both images ((of the dragon boats, the line of rocks on the right of the photos)) is the line of rip-rap that represents the beginning of the reclamation that is shown as a dotted line on the maplet.

Had a re-look at the map legend.  P.S. is for Police Station.

with a Giant Dragon, it would be common for the fisherman to turn around after finishing a race to padde the boat backwards for a bit.  These boats in the picture seat a crew twice as big as a normal crew of 20-24. These boats are holding over 40 paddlers, and it is much easier to turn around to paddle.  The ones on the end dont turn around as there is not much place to sit ;-)

Thanks Gordon, glad to have that mystery cleared up at last! 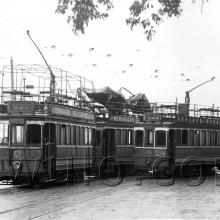 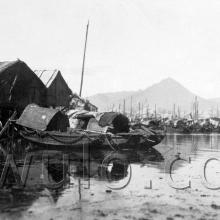