What: This group of smiling ladies worked as a side-party. Not 'party' as in drinks and dances, their job was to paint the side of navy ships visiting Hong Kong.

Here's a description of Mary Soo, well-known in this line of business:

The U.S. 7th Fleet, which plies its trade in the troubled waters of the Far East, has a girl friend named Mary Soo. Mary Soo, by tradition but not contract, has the garbage concession of all United States Navy ships entering Hong Kong, which out here is no small potatoes.

In exchange for the garbage, Mary Soo provides crews of Chinese women to paint the sides of Navy ships while they are in port. The Navy supplies the paint and Mary Soo does the work for free.

It's a happy arrangement for everybody. The Navy gets rid of its garbage, the American sailors who might have to spend their time chipping and painting the sides of the ships are free to go on liberty into Hong Kong, and Mary Soo, who has a market for refuse, is said to be the richest collector in the colony. [1]

Several of these small boats would row out to meet the navy's ships in harbour, and used as the platform where the ladies would paint from. You can see a bunch of bamboo poles tied up along the side of their boat. The ladies will tie rags to them, and use them as extended paint brushes.

When: Here's the back of the card: 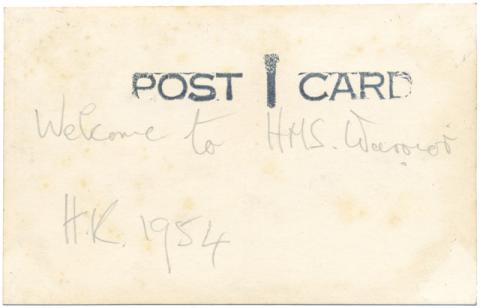 Warrior was a British Aircraft Carrier at the time, and visited Hong Kong in 1954 on the way from Singapore back to the UK [2].

Although the photo was handed out as a welcome, I wonder if this photo was taken as the ship was about to leave. The ladies are dressed smartly, not in the paint-spattered clothes they wore to work. And one bamboo has been raised to hold a string of firecrackers, likely lit to wish farewell to the visiting ship: 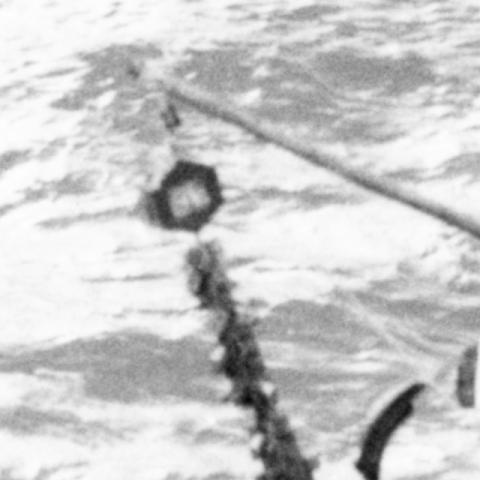 Who: Here's the flag at the back of their boat, reversed to make it easier to read: 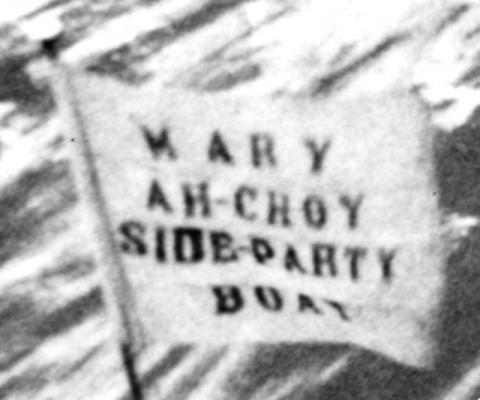 But that adds a bit of confusion to the story.

We've already seen that Mary Soo had the rights to work on all the American ships. But this is a British ship, and as far as I can tell a different lady claimed side-party rights to the British and Commonwealth ships visiting Hong Kong. Her name was Jenny, and she was known to so many British sailors over the years that her death was reported in the UK newspapers [3].

"Each side party had its own harbour territory and any infringement by another party would prompt heated disputes. The formidable Mary Soo, all of 4 feet 6 inches tall, with her No. 2 girl Ah Lin and the rest of her side party worked all the Ameriican warships - sometimes as many as 16 at a time during the Vietnam conflict, The Ah Kam Susie Side Party would look after frigates, coastal minesweepers and the Hong Kong flotilla based at HMS Tamar, whilst Ah Mee and Ah Moy Side Parties would deal with Royal Fleet Auxilliaries, Commonwealth ships and submarines.

But it was the Jenny Side Party that was the most senior and best known of all."

More likely the firecrackers were lit as a "bon voyage" as described: 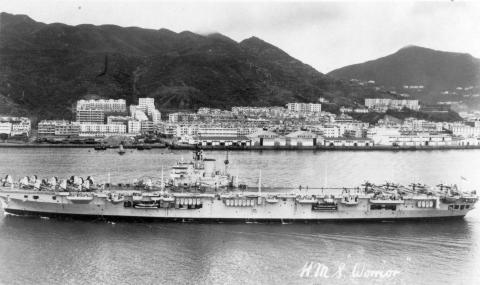 Thanks Moddsey, interesting to read there were even more side-parties than the basic two I'd mentioned. I wonder where the "Mary Ah-Choy" side-party fitted in?

And a good shot of the firecrackers in the page you linked to.

My Mum ( Peggy - 3rd girl from the left in the sampan ) a distant relative and later  junior partner of Mary Soo, retired from this side party business in 2009. Being the "youngest" and the last active member of the group, her retirement at the age of 76, is the closing  chapter in the Mary Soo legend. The last of the three side party sampans ( saved from the harbour pilots fleet, their very low freeboard and sturdy buit had served the group with an extended life for over 20 years )  was finally disposed of shortly thereafter and side painting activities in Victoria Harbour became sight of the past !

Thank you very much for writing, it's great to hear from someone with a direct connection to this photo, and to hear when side-parties finally stopped. If you get the chance, please could you ask your mum if she knows who the "Mary Ah-Choy" refers to?

You mentioned "3rd girl from the left in the sampan". Please can I check which photo your mum appears in?

Here's another photo of Mary Soo's ladies at work, courtesy of IDJ: 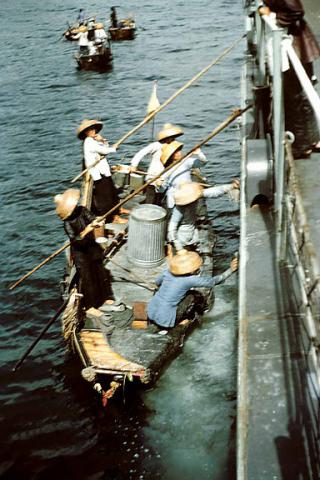 Thank you for the information!  I did not know that the side-party business survived until 2009 -- I always assumed it is a thing of the past.  I came across a document several weeks ago and it includes old and new photographs of your mother.  You can download it from the section "The Tragedy of HMS Cossack's Side Party" at the bottom of this page:  http://www.hmscossack.org/history.htm

It would be great if your mother can tell her stories to the Hong Kong Maritime Museum.  I can try connecting you with someone who works there.

I also came across the obituary of Jenny, who is among the most famous side-party ladies, in the Telegraph.  Note that no surname is given in the title!

Permalink Submitted by moddsey on Tue, 2012-04-03 12:52.
I would presume Ah Choy would have been the partners of the thriving business.

I am not sure if it qualifies for the side party story, but I had a chat with my father the other day about side parties, and he mentioned in the late 60s/early 70s he once worked in a company (of indeterminate size and name) that provisioned for ships, and he bought and delivered them on board.  He would get paid for his services, and benefits included eating as much as he wanted on board.  For him the best part was he could use the phone for free to call his girlfriend (my mum).

However, I am not sure whether that company/entity is in the same line of business that provided the side party services.  He did claim however that he used to see side parties painting commercial vessels too, not just military ones.   I'll try to extract more information from him next time.

Thanks for the extra information.

I also received these notes from Stephen Davies:

Photos like this appear in lots of websites about Jenny and her side party. If you go to http://homepage.ntlworld.com/micheal.overton/Jenny%201.htm you'll see very similar images, so what we're seeing is a typical farewell. If you can zoom in a bit, it may be possible to tally face with face. There are lots of images (for example http://www.hms-danae.com/gallery/, http://www.mcdoa.org.uk/News_Archive_25.htm, http://www.navy-net.co.uk/international/47748-jenny-side-party-bem-2.html so it isn't too hard if the resolution on your photo allows.

Originally I thought there was a clear division: American ships to Mary, British ships to Jenny, but I had the wrong idea. In "THE TRAGEDY OF HMS COSSACK'S SIDE PARTY" linked to above, Peggy (part of Mary Soo's group) was working on HMS Cossack, and this comment shows there was no limit at all:

Returning in Cossack in 1957, (..), FOUR side parties scrambled onto the iron deck and raced up to the bridge to bid for custom, all screaming at once. These included one that had looked after Cossack of old, one from Comus whose people had been transferred to Cossack in refit, one from Alert whose Jimmy had kindly recommended them, and Jenny's. No.1 went down and locked himself in the sick bay and an SD who spoke some Cantonese managed to sort them out and picked the one led by a man as he was a bit less shrill than the others.

Permalink Submitted by Leapy Leung on Mon, 2014-01-13 09:57.
Peggey , my mum, ( second son, elder brother of Eddie, ) now reside in Sydney, Australia. Tough little woman my mum is, it will be her 81st birthday this mid May. I believe all sibling will be all in HKG to celebrate .

It's a bit early to wish your mum happy birthday, but I'm glad to hear she's doing well.

Cliff uploaded his 1979 photo of the QE2 getting a fresh coat of paint: 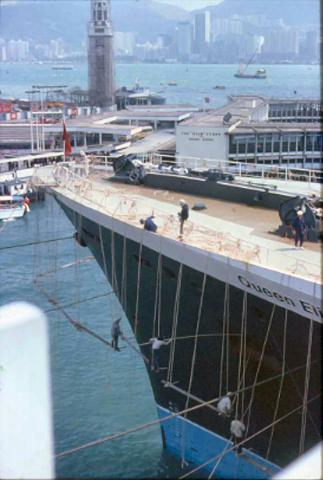 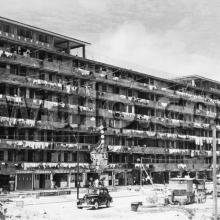 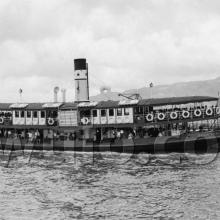