Where: A couple of buildings on either side of the photo pin down where it was taken. First look down in the bottom right corner, where you'll see these buildings: 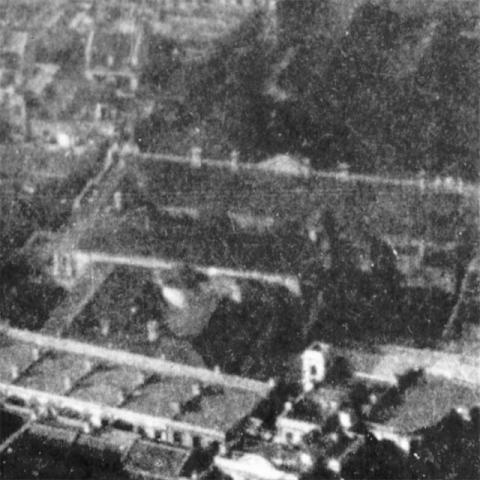 The long building across the middle is clearer to see in this photo (it's below the 'c' of the watermark - you can click it to get a zoomable copy):

It's the old hospital quarters building, on the corner of High Street and Eastern Street.

Next look across to the left side of the photo, where there's this light-coloured oval: 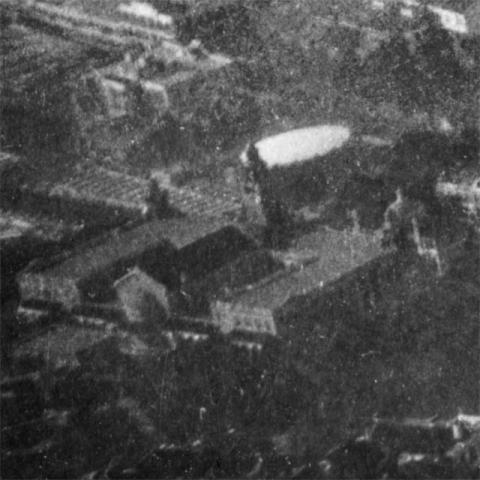 It's the roof of the gas holder that stood in Shek Tong Tsui, near where the market is today.

We're looking north over Sai Ying Pun and Shek Tong Tsui. There are also buildings from mid-levels in the foreground, and Stonecutters Island is away in the distance on the right.

Who: I wonder who'd have bought this view? It wasn't a popular subject for tourist postcards, so maybe it was someone who lived in this area.

When: This was a real photo sold as a postcard. Here's the back: 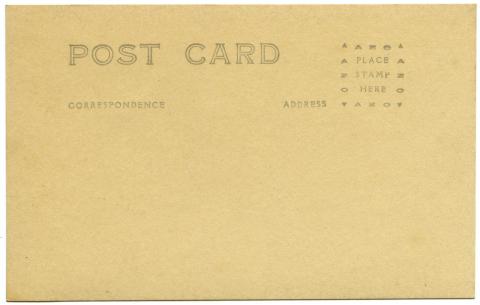 We've seen this stamp box design before. This type of paper was sold between 1910-1930 [1], giving a rough idea of the photo's age. Let's see if we can narrow it down further.

Take a look at the gas holder again:

Can you see a tower in front of the gas holder, attached to a large building? That's the Main Building at Hong Kong University, which was completed in 1912. Just above the right corner of the Main Building there's a small dome. That was opened in 1919, to hold the University Union. It's still standing today, now named the Hung Hing Ying Building.

Over on the right, at the bottom of the photo is another education building: 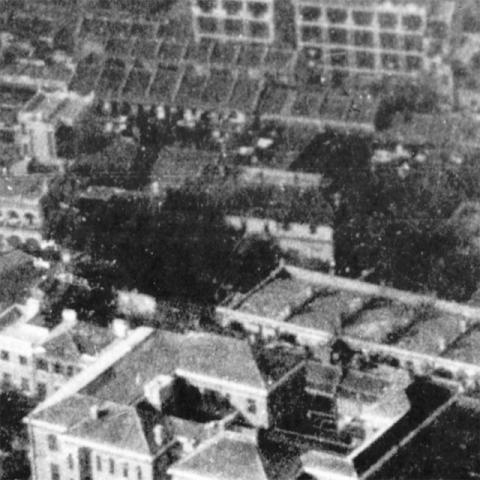 It's the main building of St Stephen's Girls' College, which opened in 1924.

Back in the centre, and again along the bottom edge, we've got these buildings: 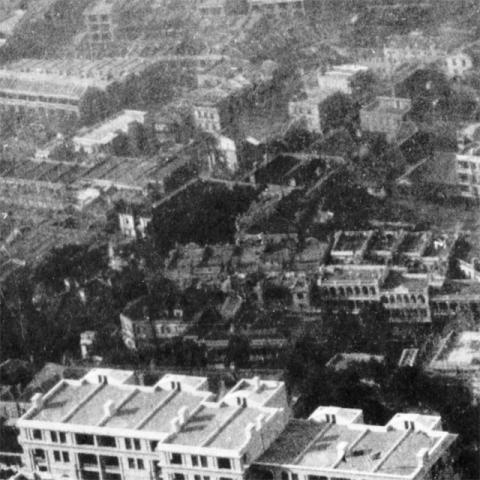 Does anyone recognise them? They look newly built, so if they were finished after 1924 they'll narrow down the date even more. For now I'll guess the photo was taken in the mid- to late-1920s.

The photo itself is over ninety years old, and showing its age. But even when it was new it wasn't as sharp as the other, older photo of this district shown above. Look at the shadows of the chimneys and you'll see it's late afternoon:

That makes for a darker photo, with more shadow. And since cooking was often done over firewood, there would be smoke in the air as families got dinner ready.

I've lived in and around Kennedy Town for over twenty years, so I'm always interested to see old photos of this side of Hong Kong. It wasn't a popular destination for tourists, which means there aren't many photos. If you know of any, please let me know in the comments below.

Trivia: Even though most of the buildings in these old photo are long gone, I like looking for signs of where they were. One example in this photo is an unusally shaped plot of land, that has been carried on into the present-day buildings.

Here are the buildings today, seen from street-level:

Can you spot that same curved shape in the old photo? 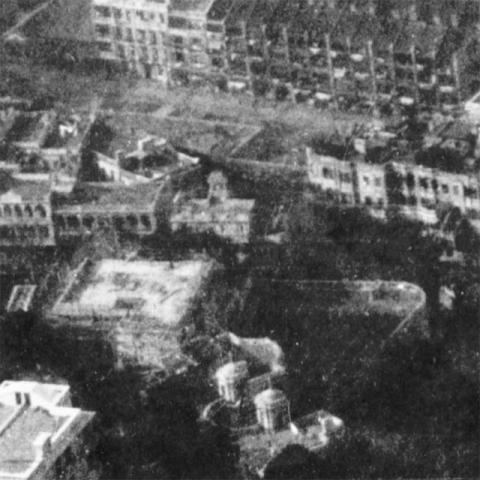 The gasworks blew up in May 1934, killing a reported 41 people, so the pic is definitely before then. The explosion destroyed the terrace of buildings you can see just below it, and the one you can just about see behind that (Darley and Clarence Terraces- only Clarence Terrace still exists). I mentioned this elsewhere here quite a while back when you posted pics of the gasworks. The area was quite sparsely inhabited when the gasworks was built in the 1860s.

The large, light-coloured building on the unusually shaped lot could be the Tai Wo Hospital 太和醫院. I was actually born in that hospital in 1946. The old retaiining wall of the hospital can still be found to the south of the building at the corner of the lot.

Thanks Adam. Here's the link to the Gasworks page: http://gwulo.com/node/7714

A 1958 map (plate 7-3, Mapping Hong Kong) still shows round gas holders at that site, so they must have been rebuilt after the explosion.

re: Junction of Park Road and Babington Path

Any idea when that building was built? In this photo it looks as though it has scaffolding around it, as though it is under construction. That could give us a date for the photo.

The rounded-corner building (Hing Wah Mansion, No. 1 Babington Rd) was built in 1963.  The building to its left (Sung Ling Mansion, No. 1A Babington) was built in 1958.  I must say the layout of the building in scaffolds (to the left of the rounded-corner building) looks a bit like Sung Ling Mansion, but if it is then this photo would be dated to the early to mid-50s.

Looking at the cityscape it

Looking at the cityscape it also cannot be the 1950s.  So maybe it's the predecessor of the building in scaffolds... probably not uncommon for buildings then be torn down in after 25 years...

Another distinctive building in the photo of the curved plot is the building with the two domes at the bottom of the shot. Does anyone recognise it?

By the same visual estmation, those "newer" white buildings at the bottom of the photo would be Nos. 88-108 Robinson Road (5 separate buildings) today.  The oldest one (Solon House, No. 88) was built in 1961.

re: Another distinctive building

I believe one of the buildings with the domes was called Belvoir Lodge, or at least on the site of it, as the angles in the photos don't seem quite right. I cannot find any information about Belvoir.

A map from the 1900's showing this location here

Edit 2017: The building with the two towers was called Oaklands/Ardmore. Belvoir was the site of the Tai Wo Hospital, under construction in this picture.

The Rounded Building (Now Hing Wah Mansion) on 1-3 Babington Path was once a 'bachelor's mess' named Juvenix Lodge in the 30s. A couple of 'premises let' ads featured in SCMP in 1939. I've attached two for your reference. I'm not able to find more information about the lodge... though hope this is helpful. 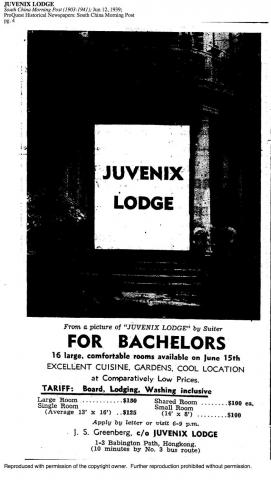 Very interesting adverts. I have investigated this area extensively and there does not seem to have been any building on the Hing Wah mansion site until the present building was built c1960. The area was gardens/tennis court for the Oakland Path building Oaklands. There may have been a small building/garage right on the junction of Park and Babington - the aerial photos are not clear enough to confirm this.

In the 1930's No 1 Babington Path was slightly further up the hill. Originally a house called Belvoir Lodge, constructed in the 1890's by the Richmond Estate Co, it later (post war?) became Tai Wo Hospital. Today there are four blocks of flats on the site: Ping On Mansion, Sung Ling Mansion, Minerva House & Carol Mansion which were all built in the late 1950's. The original retaining wall survives on Babington Path in front of Sung Ling mansion.

No 3 Babington Path was originally a house called Edenhall, also constructed in the 1890's by the Richmond Estate. Post war the House became the Pui Ying Middle School before being demolished and replaced with a purpose built school c1960. This in turn was replaced wit the Scholastic Gardens development in the 1990's.

From your adverts it seems that the buildings 'Ardmore' and 'Edenhall' were rebranded as Juvinex Lodge in the 1930s and rented out as lodgings. 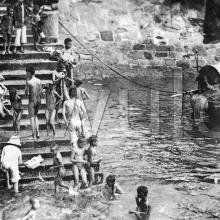 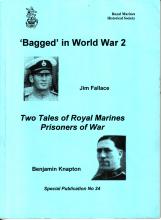