It looks as though this building changed hands several times. In a 1909 advertisement it is described as 'Aster House (Late Connaught Hotel)'. Then Moddsey notes that later it changed it's name from Astor House to the St. Francis Hotel. Despite the change of name, it's function stayed the same - a hotel.

The 1909 advertisement uses the spelling 'Aster' throughout, even for the 'Telegraphic Address'. However in all other references I've seen, it is spelled 'Astor'.

As far as I can tell, it straddled the plots that today house Edinburgh Tower and York House. Later I'll overlay the different maps to get a clear answer for that.

END_OF_DOCUMENT_TOKEN_TO_BE_REPLACED

In the 16 Nov 1899 issue of the HK Daily Press, this building is mentioned in the 'Annual Licensing Sessions':

In 1907, it is referred to as "The Connaught Hotel" in the Hong Kong Government Gazette (Nov 8, 1907). That year, Chan Honkey applied for an adjunct liquor licence and it was approved on Nov 19th (Wah Sze Yat Bo). The Chinese name of the hotel was 康樂 酒店.

This is an image from an online book.  I don't really want to upload the image to Gwulo - so I did a cut-and-paste.  Is there another way ?  I have the image URL.

I'd just link to the page, with a mention of the book for when the links stop working, eg:

Note that their url only includes the page number after switching to the full page view.

About the Windsor Hotel

A reference to the Windsor Hotel caught my eye in a TLS review of a travel book about to come out, "In the Land of Pagodas", NIAS Press. It's a translation of the account by the French journalist and photographer, Joseph Gervais (aka Alfred Raquez, given as the author) of his travels in Hong Kong, Macao, Shanghai, Hubei, Hunan and Guizhou in the late nineteenth century. I quote: "In Hong Kong he suffers great inconvenience in the German-run Windsor Hotel where security is non-existent ("suffocate or be robbed"), and he is delighted to see a would-be burglar who has run a plank from the building opposite topple two storeys to the ground when the plank snaps."

More about the Windsor Hotel

I've now copied the relevant passages about the Windsor Hotel from In the Land of Pagodas, compiled from articles by the French journalist, Alfred Raquez. I've read elsewhere how difficult it was to find accommodation in early Hong Kong. The passages in question relate to September 1898. It makes me wonder how my less well off English grandfather fared on arrival in Hong Kong in 1895.

p. 82-83 Scene One: Hong Kong Hotel: “I am very sorry…” There are no rooms, not even the most miserable hutch: the hotel is full up. I turn around followed by my boy and coolies carrying my bags.

Scene Two: In Queens Road, a large sign proclaims “New Victoria Hotel”. “I would like a room” – A room? But here, Sir, we only have a refreshment room with billiard tables and a dining room.” – “So why do you advertise this place as a Hotel?”– “You’re right, but that’s the way it is.”

Blast, this is getting serious! Will I be forced to set up camp with my boy, my coolies, my valises and my boxes or charter a sampan on which to spend night and day?

Scene the Last: Finally the Windsor Hotel. “I would like a room”. All right – O joy! I could have kissed the manager, German though he may be, but I held back lest he took me for a madman and packed me off to look for accommodation in the hospital. He leads me upstairs to an attic room, which will be most useful to me as a dark room for developing my photographs. But the room promises a most dispiriting stay. Still, nothing else is available. In my exploration of the room, I notice that the two windows that are supposed to provide daylight and (supposedly) fresh air, open onto an alleyway no wider than two metres. The windows are not barred. The house opposite is undergoing repairs hardly reassuring. Tonight I face a dilemma: suffocate or be robbed. I tried to sleep behind shut windows, but the heat was so intense, the house opposite so still that I ended up opening everything in order to get some sleep. Profound sleep, the great healer, eventually came.

p. 98 Last night a coolie from next door tried to pass through my room, but the windowsill gives way and man and plank tumbled two stories below (…) Security is oddly understood in the hotel and manager keeps pretending that no other room is available.

p. 106 At nightfall, armed with a long pole, on which dangled a hook on a string, a coolie in a neighbouring house made commendable efforts to relieve me of a small parcel I had left on a table in my room …. Honestly, line fishing in a hotel room! What next? Once again I lodge a protest with the phlegmatic German who manages the hotel, but with no more success than on previous occasions. I run to the Hong Kong Hotel. Still no vacancies. I have no alternative but to hunker down, even during the day.

In 1916, the French Store was also located at 13 Queen's Road Central with the entrance next to Astor House.

Connaught House officially opened its doors on 1st December 1899 after a hiatus:

“After having been closed for some time the premises formerly known as the Windsor Hotel, in Queen’s Road Central, were re-opened yesterday as a private hotel under the name of Connaught House, with Mr. Antonio Fonseca as manager. Considerable structural alterations have been made and every room has been re-decorated and is being re-furnished. At present only about half of the rooms are available, but Mr. Fonseca expects to have the whole ready by next week end. A visit to the premises showed that everything is being done to make those who stay there comfortable.” 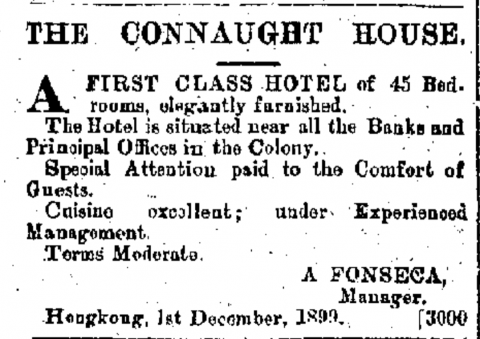