This photo is included a document held at the UK National Archive, their reference CO 129/88. It was originally included with a letter from Mr Murrow of the Hongkong Daily Press, sending a complaint to the government back in London. The captions to the photo read:

No.1. Approaches to the "Daily Press" Office, Hongkong.

OLD BAILEY STREET. - Looking up the hill (South). The arrow points to Chancery lane. The wall to the left is the Gaol wall - say the South West corner.

To prove that convicts can work upon the Old Bailey Street, I call Your Grace's attention to View No. 1 ((ie this photo)). The police man there seen, was a guard over convicts employed carrying the boulders into the Gaol. The gaol has been more than doubled in size, since which expansion the stock of stones intended for convicts to break has been placed on one side of the Old Bailey, choking up the gutter and forcing the water during heavy rains across the street. The Photographs were taken a few weeks ago, since when there has been some little improvement.

Thanks to Christopher Munn for letting me know about these photos. At over 150 years old, they must be some of the earliest photos of Hong Kong still in existence, and a great early view of the area around Victoria Prison.

Half way up the slope on the left is the western octagon tower of the original gaol, shown in both the 1846 and 1914 plans of the gaol/police complex. (It was retained in the wall after the barrack block was built in 1862-64.) I recall it was demolished in the 1915-20 period. By the 1860s the tower was used as a quarter for a married Sgt. There is still a variation in the masonry where a wall was built to replace it. 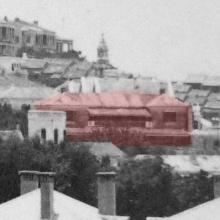 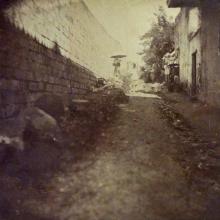