c.1886 View over Central and the Harbour

There's lots to see in this albumen photo from the 1880s.

I'll look at it again in future, splitting it up into more manageable sections. To start with, I'll just describe the three buildings I've used to choose 1886 for the photo's date.

First, in the centre-right foreground we see the rectangles of the Ladies Recreation Club's tennis courts. Only one is marked out as a court, the others look as though they are still being built. So we need a date not very long after the club opened in 1883. (Annelise, are there any records of when the different courts were built?)

Next is the Roman Catholic Cathedral, just below the right point of the 'w' in the 'Gwulo.com' watermark. You can see that the main arches have been built - but also that you can see right through them with no walls, roof or windows to block the view.

That's a big help, as we know that the foundation stone was laid on 8 Dec 1883, and the cathedral opened to the public on 7 Dec 1888. So the photo was taken during that 1883-8 construction period.

Finally, inside the 'o' of the watermark '.com' we see the second HSBC headquarters. The side facing the sea is still covered in bamboo, looking like it is still under construction. Wikipedia says that the old building was knocked down in 1886, and the new one built the same year, so that's my best guess for the year of this photo.

The six courts of the LRC are completed.  Only two were grass, the others concrete so you cannot see the markings.  The four original ones stepping down the hillside were finished in Feb 1884.  The two above the Pavilion were started before Queen's Garden was built.  The Pavillion itself was completed at least by 1885 becuase it was burgled that year with a report in the newspaper.  The construction you see was for the Albany Filter Beds which were officially finished in 1888.  So you can add "filter beds" as "places in this photo".

I think this photo shows the terrace for Queen's Garden being built.  Also, "Derrington", below the LRC has not been built yet - so a construction date for it would help.

The first Cricket Club pavillion is in place.

I'll buy your first reproduction print of this photo, if you are making them yet.

According to a book "City of

You can also see the marine police headquarters in kowloon as well as the time ball tower. AMO dates the construction of that building to 1884 (despite it's new made-up name of 1881 Heritage)

Annelise, I hadn't thought of concrete courts - thanks for that. If I zoom in I can see nets up around those courts, suggesting they were already in use.

No reprints available yet - I'll put up a few more old photos, then get to work on the next step.

HF, interesting, I hadn't spotted that. I've made a place for the previous cathedral to collect information about it.

80sKid, yes I'd like to take a closer look at TST another time. It's not exceptionally clear, but there are still a few interesting things to see.

Thanks for everyone's input,

Do you own the original albumen print? If yes, are you willing to sell:-)?

Yes, I have the original albumen print. No plans to sell the original, though I do plan to sell re-prints at a later date.

By comparing yours and my photo, I believe my photo should be slightly earlier.

Could the part of HKO over TST be blown up?

Is it possible for you to blow up the part of the Hong Kong Observatory over TST?  I am interested to buy a re-print if more details of HKO could be seen.

re: HKO over TST

re. HKO over TST

Many thanks David.  The blow-up can see HKO and the Time Ball Tower more clearly!

David, humour me on this one,

below the LRC tennis courts, there is a gully that leads down to the "albany nullah",
there is a bridge over the gully. Is this the famed "Bowen Road Bridge over the Albany Nullah"?. It's only visible because the gully hasn't been filled in and the filter beds built.

The next bridge is above the Church, which we have previously identified as Kennedy road.

What do you think?

re: Bridge over Albany Nullah

Well spotted - yes it certainly looks in the right place. Hard to tell if it's the bridge that Bowen Road eventually crossed, or some temporary structure while they're building the filter beds. But if not the actual bridge, then at least a close relative! I'll add that place to this photo. 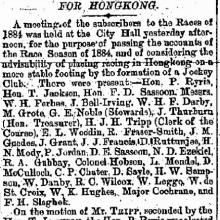 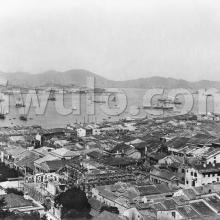 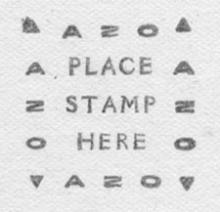