Who: The crowd is almost all male, with the exception of the lady on the right, strolling along with her parasol. Zoom in and you'll see she's left a trail of turned heads in her wake.

The street is busy with people. We can see the time on the Gloucester Building's tower - its twenty-five past one in the afternoon. Lunch time!

Where: Looking east along Des Voeux Road. The Pottinger Street cross-roads is just behind the photographer.

What: Let's work our way along the street, starting on the right.

Most of the buildings along here are four storeys high, and built so that the ground floor is set back from the road, leaving a covered walway in front of the building. The names on the buildings are hard to make out, but there are several English signs, including a couple of recognisable brands like Agfa and Castrol.

When this road was the seafront, these buildings would have looked out over the harbour. I wonder if any of them are old enough to date back to that time?

Typically for these old photos, there aren't many cars in sight, just a mix of pedestrians and rickshaws plus a couple of trams for good measure. The nearer tram has stopped to let people off. It's signposted to Western Market, so it's not far from its destination.

The building to the right of the tram looks very grand, and appears to have light bulbs dotted over its facade. A restaurant perhaps? Does anyone recognise it?

Above the tram is the ornate tower of Jardine House. You can see they're flying the St Andrew's cross flag from the top of the building. It's the Scottish national flag, and also the flag of the Jardine Matheson group. Above that is the tower of the Gloucester Building, flying the Union Jack.

In the distance, just where the road turns to the left, we can see a large building with a dome on top. That's the Bank of Canton's building, marking the start of a whole block full of banks. They're flying a flag too, but it's too far away to make out clearly.

Heading back along the other side of the road, the first building that's clear to see is the General Post Office, with it's curvy columns facing out towards Jardine House. Next to it is a much taller building, with deep verandahs to give shade and help keep the occupants cool. We've seen it before on views from the harbour - it's height makes it easy to spot.

Down at street level is a sign we've seen before, 'On Lok Yuen'. It's in the forground of this 1950s photo: 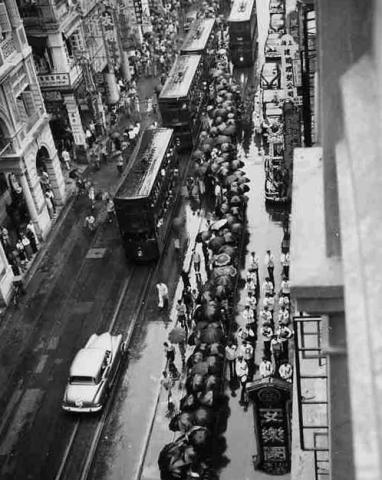 One of the commenters to that photo noted it was an ice-cream parlour at the time. The name lives on – On Lok Yuen Building stands there today.

Just in front of the 'Dodge' sign there's the entrance to Douglas Street. We pass by that, and a couple of rickshaw-pullers touting for trade, and we're back to where we started.

When: Looking at the list of 'Places shown' below, we can see it must be at least 1932, when the Gloucester Building was finished. I'll guess mid-1930s, but please let me know if you can spot anything that dates it more accurately.

Another prominent landmark is the Bank of East Asia Building which was located to the east of Gloucester Building. As mentioned in http://gwulo.com/bank-of-east-asia-building-2 , the Bank was completed in 1935.

I've looked at the photo again, but can't be sure whether we're looking at the new or old BEA building. First I thought we'd be able to see the tower if the photo was later than 1935, but these couple of photos from the 1950s (1, 2) suggest it depended on the angle of the camera whether you could see the BEA tower or not.

What are your thoughts?

As you say, it depends on the camera angle.

Here are two photos of the BEA

1937 (approx)  from a eastbound tram on DVRC near Pedder St. The BEA tower with the flag can be seen and a later shot of the buidling itself. 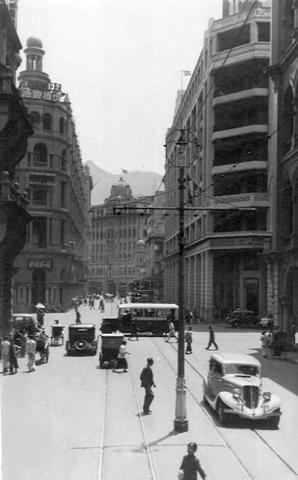 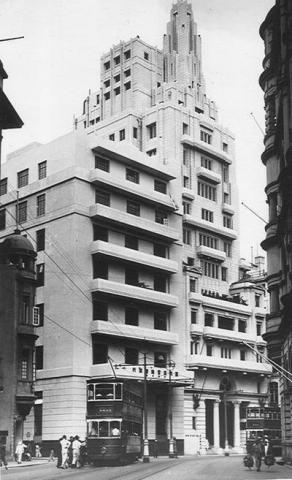 Like you, I wonder why there are so few people in evidence!

In 1938 there were several large Chinese Dept. stores in Des Voeux Road, on the left of photo and out of range of the camera: Wing On and Sinceres.

Also not in camera range, is the Chinese hotel 'Tai Koon' which was on the right and further along towards the then Central Market.   The Tai Koon was where many of us were first interned by the Japs in Dec 1941 before being sent to Stanley.

Re: Des Voeux Road Photo (with the Gwulo.com watermark)

Judging from the old buildings and a few promiment business signs (like the On Lok Yuen 安樂園 sign) as shown in the photo. I believe the photographer was standing way east of the Central Market.  Probably a little bit east of Pottinger Street.

That was why Wng On & Sincere was not in the photo as they were way back towards the Sheung Wan side of Des Voeux Road Central.

I cannot pin point the years though. I am too young to do that.

Hi Barbara, as T describes, both the hotel and stores are out of sight behind us as we look at the main photo. You can see the stores, and maybe the hotel too, in these photos taken further west. 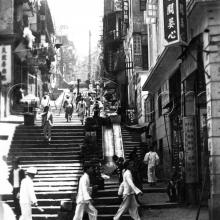 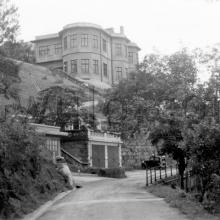