These men were half way through five unforgettable years.

Who: The poster they're holding identifies them as 'The famous "Number Nines" concert party of the 25th Middlesex Regt'.

They live up to their name - each man wears a nine on each shirt collar, and a natty 'number nine' hat on his head.

In their day jobs they were soldiers in the 25th Battalion, Middlesex Regiment.

Where: The poster says their show is held 'At the Grand Palace of Varieties'. If we take it literally, they'd be performing in a music hall in Clapham. (The building still exists as a theatre today, the Clapham Grand. [1])

But the note on the back of the photo identifies the photo's location as Hong Kong. The performers are wearing chinese-styled shoes, so I'm happy to believe it: 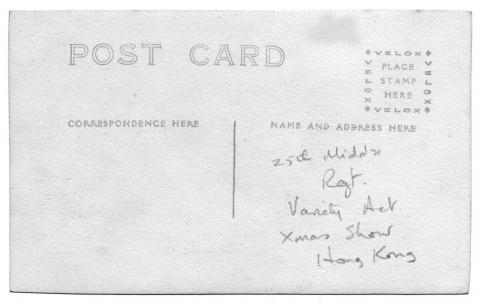 The mention of the Grand Palace of Varieties was just a reminder of home to the soldiers in the audience.

What: The poster advertised the show as a 'concoction of original Middlesses at 9 p.m. A cure for all ills, why take pills'.

It may have been a show to the public, or more likely part of the Christmas show  for their fellow troops.

When: A timeline for the battalion helps pin down the date:

So, the photo was taken some time between April 1917, and their departure in July 1918. It was a Christmas show, so that pins us down to 1917. And as a final confirmation, this type of photographic paper (see the 'Velox' stamp box with a diamond in each corner) was manufactured from 1907 to 1917 [8].

Please leave a comment below if you have any questions or corrections.

One of the surprises at yesterday's exhibition was an original menu from the April 30 welcome dinner mentioned above. Amazing that this little scrap of paper has survived safely for nearly 100 years.

Heather Day was celebrated by the Scottish Community on 30 November and 1 December 1917 at St Andrew's Fair held at the fair grounds (Murray Parade Ground and Cricket Ground).  All money that was raised at the fair was for wounded and disabled soldiers.

As part of the Heather Day celebrations, the Famous "Number Nines" Concert Party of the 25th Middlesex Regiment was held at the Murray Parade Ground on 1 December 1917. The official programme of that evening's event included the following performances:

The 'Grand Palace of Varieties', I reckon was a temporary stage erected for the Fair and the evening's entertainment.

As for the photo postcard, the Hong Kong Telegraph on 3 December 1917 announced that "A Fong" (the photographer) had taken 14 splendid photos of the Heather Day festivities and that the photos were available for public viewing at Messrs. A Tack and Company's store at 26 Des Voeux Road. Perhaps that is the origin of the photo.

re: Solving the Picture

Thanks Moddsey, that's an excellent find. I'm very pleased to see that it confirmed as a Hong Kong photo.

So there was an actual 'Grand Palace ...', not an imaginary name as I'd guessed.

PS Please could you jot down the source (newspaper & date) over on the clipping page?

Hi - I have just found this photo and website link by doing research into the 25th Middlesex Regiment. I'm currently researching family tree and have found my great grandfather was part of this regiment who went to Vladivostok. Would anyone know the names of the people in the photo above in the off chance that perhaps he was one of them? Probably a long shot but worth a try!

Hi, I have just come across this photograph and I may be able to offer one name as a member of the concert party! My Grandfather John Richard Callard was a sergeant in the Middlesex Regiment and was a member of a Middlesex regiment concert party that entertained the troups in Siberia.  When I was 7 yo he taught me some Russian and the cyrillic alphabet and spoke about his time in Siberia.  I also know that he caught malaria - this could have been in Singapore or in Siberia.

He joined up in 1915 and served in France and was not initially in the 25th regiment.  He was back in London in mid June 1919 when he got married.

I am not certain that he was a member of the Number Nines but I doubt that there were too many concert parties there at this time.  I do not have any photos of him at this time so I cannot definitely identify him but I suspect that he is the one holding the poster.  My Aunt was not able to provide any additional information about him during this time but I am trying to see if other relatives have photographs or other information about him during this time.

Have you been contacted by anyone else with suggestions of who might be in the line up?

Thanks for writing. I haven't heard any other suggestions about who is in this photo. It would be great to identify them, so fingers crossed some of your family photos can turn up a match.

Further memorabilia of their stay in Hong Kong sold at an auction in 2010.

I believe my great uncle Edward Baldwin Clarke was in the 25 Battallion, Middlesex Regiment at Vladivostok. I have a record showing that he shipped out of there at the end of 1919 on the US Army Transport Logan, arriving at San Francisco January 1920

Thanks David, good to get a date for when the troops left Vladivostok.

We've got one more photo that shows a Middlesex man at:

At last week's Stampex I saw another copy of this postcard, but with writing on the back. The seller kindly let me note it down (may not be 100% correct as the handwriting wasn't very clear):

I have more about the story behind “The Famous Number Nines”.

The key is what they’re wearing, basically a variant of prison fatigues. Knowing the RN system, I wondered whether this was an army equivalent to the RN’s punishment system.

From what I can find out it isn’t. The probable answer is instead to be found in Eric Partridge’s marvelous A dictionary of slang and unconventional English. Therein he tells us that Number Nine was the 1820-1850 slang for the old Fleet Prison (because of its address at No. 9, Fleet Market. So it was around as a bit of slang at society’s demotic end and by 1915, by which time the Fleet Prison (demolished 1846) was long gone, looking for a home.

By one of those wondrous military derivations it became army slang for the regimental quack (military slang for the MO) in 1915, not because the quacks were prison warders or natural gaol bait, but rather because they administered a punishment equivalent to a prison term, the famous No 9 pill. It was their standard remedy for constipation (a perennial army complaint), so shorthand for a purgative and a stretch in purgatory.

Hence, by another wondrous mental shift, Number Nines as of 1917 became the army slang for prunes, those splendid breakfast movement encouragers of prep school days…a term for prunes I can still recall both my grandfather and father using when I was a boy!

So, the concert party name was an elaborate spoof on the regimental medical officer and staff, the army punishment system and, self-referentially, to the probable effect of their act on the audience.

I realise, by the by, given what we now understand about Number Nines, that a further clue was there in the notice: “…their concoction of original Middlesses".

There is an NZ Army story of a standard, sub-unit medicine chest with 14 numbered bottles of tinctures and pills. In bottle No. 9 was a concoction (there’s the word) of colocynth, the standard purgative of the day, which included ginger, rhubarb, etc. as well as the main ingredient, colocynth (citrullus colocynthis, aka bitter apple, bitter cucumber, desert gourd, egusi, vine of Sodom, or wild gourd (!) - marvelous recipe in John Savory, A companion to the medicine chest, and compendium of domestic medicine, 2nd enlarged ed., London: John Churchill, 1840, p.35).

My suspicion is that ‘Middlesses’ is a play on molasses…but I can’t find any obvious early 20th century military medicinal reference.

re: The Number Nines

Thanks Stephen, I hadn't realised there was so much of a story behind their sign!

To put icing on the cake, for those who can remember Bingo (Housey-Housey), the caller traditionally announces the drawing of nine as "Doctor's Orders....Number Nine". That's real cultural penetration!

Very interesting. Nice read. A comical advert from 1916/17 can be viewed here

I have an account of the incident regarding the Tyndareus hitting the German mine off Cape Agulhas, referred to by David above, written by a soldier who was present named Sydney Catt.

It makes interesting reading and if anyone is interested I can forward a copy . (tideswell27@hotmail.com).

Incidentally the Tyndareus Stone, also referred to above, was originally displayed in the National Army Museum in London following its shameful return to the U.K. It has now been put into storage in a warehouse elsewhere in the country! There is a very small group of us in Hong Kong who are actively campaigning to have it returned here - but it is not proving easy. 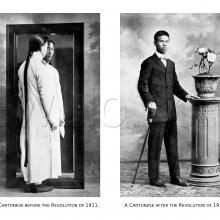 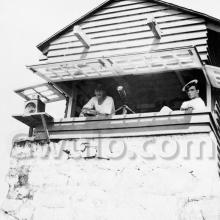 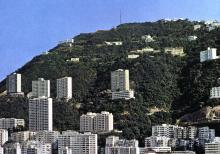