These photos (and their titles!) have an unlikely source - they come from The King's Own Yorkshire Light Infantry's Christmas cards, 1912.

Why would a British infantryman be sending photos of Chinese gentlemen to his family and friends?

The subject of the photos is the disappearance of the Chinese "Queue", the long pigtail you can see on the gentleman on the left. For more than 200 years, all Chinese men had been forced to wear their hair in this style. Its disappearance was big news at the time.

It was originally a Manchu hairstyle: shaved forehead, the rest of the hair uncut and braided into a pigtail. When the Manchus conquered China, they forced the resident Han Chinese to adopt the same hairstyle.

As new rulers, stamping out any remaining resistance to their rule was top of their to-do list. One easy way to do this was to kill any man who didn't wear his hair in the approved Manchu style!

With the final overthrow of the Qing dynasty (ie the Manchus) in 1911, the queue's days were numbered. Once again, the man-on-the-street didn't have any say in the matter - in December that year:

I wonder if local hair stylists still celebrate that day?

Back to the Christmas card. The Yorkshire-men were stationed here between 1908 and 1913, so this was the last year's Christmas card they send from Hong Kong. I'll put up pictures of the whole booklet another time, but it includes a standard greeting, space to write more if you want, and four photos including these.

To the ladies who received these cards, the photos must have looked very strange and exotic. But there's a twist to the story:

Today, thousands of Chinese barbers all over the country are doing a rushing business, and vast quantities of Chinese hair are being exported to be made into the rats and switches [hairpieces for women's hairstyles] for European and American ladies. [The Chinese Revolution. c.1912]

So there's a good chance at least some of the ladies looking at these photos already had a queue or two in their home!

Beside the Queue is the hair

Beside the Queue is the hair style forced by Manchus, but in old Han Chinese culture, people never cut the hair. This was why many Han Chinese refused to follow the Manchus to cut the hair with maintaining the Queue. Han Chinese believes the hair is the gift from parents, so in whole of their life the hair should be maintained.

re: Beside the Queue is the hair

Micahel, thanks for your comments. You make a good point - the Han chinese and Manchus both had the tradition of long hair, but the big difference with the Manchu style was the shaved forhead. (I note the man in the left photo has the long hair, but no shaved forehead.)

The Queue Order (simplified Chinese: 剃发令; traditional Chinese: 剃髮令; pinyin: tìfàlìng), or tonsure  decree, was a series of laws violently imposed by the Qing (Manchu) dynasty in the seventeenth century. It was also imposed on the Pingpu people in 1753 and Chaoxianzu people in the late 19th century. Traditionally, adult Han Chinese did not cut their hair. According to the Classic of Filial Piety, Confucius  said
“We are given our body, skin and hair from our parents; which we ought not to damage. This idea is the quintessence of filial duty. (身體髮膚，受之父母，不敢毀傷，孝至始也。)”

As a result of this ideology both men and women wound their hair into a bun or other various hairstyles. Manchu men, on the other hand, shaved their foreheads, leaving a long tail (traditionally called "queue" in English).

In 1644, the Manchu allied with Ming Dynasty general Wu Sangui and defeated Li Zicheng, and subsequently seized control of Beijing, then they forced Han Chinese to adopt the queue as a sign of submission. A year later, after the Manchus had reached South China, Dorgon imposed the Queue Order for all Han Chinese, giving the Han Chinese 10 days to shave their hair into a queue, or face death. Although Dorgon admitted that followers of Confucianism might have grounds for objection, most Han officials had instead cited the Ming Dynasty's traditional System of Rites and Music as their reason for resistance. This led Dorgon to question their motives: "If officials say that people should not respect our Rites and Music, but rather follow those of the Ming, what can be their true intentions?"

The slogan adopted by the Qing was "Keep your hair and lose your head, or keep your head and cut your hair" (Chinese: 留髮不留頭，留頭不留髮; pinyin: liú fà bù liú tóu, liú tóu bù liú fà). The Han Chinese people resisted the order and the Manchu rulers struck back with deadly force, massacring all who refused to shave their hair. Rebels in Shangdong tortured to death the official who suggested the queue order to Dorgon and killed his relatives. The three massacres at Jiading is one of the most infamous massacres, with estimated death tolls in the tens (or even hundreds) of thousands. The imposition of this order was not uniform; it took up to 10 years of martial enforcement for all of China to be brought into compliance.

The purpose of the Queue Order was to demonstrate loyalty to the Qing and, conversely, growing one's hair came to symbolize revolutionary ideals, such as during the White Lotus Rebellion. Taiping Rebellion being called the Long hairs (長毛) or Hair rebels (髮逆).

In Hong Kong, political rebels are still calling themselves 'Long Hair' even today.

Just browsing through the list of photos in the talk (having missed it due to work).  The 'Chaoxianzu' mentioned in the article are the ethnic Koreans.

The greeting inside the Christmas card 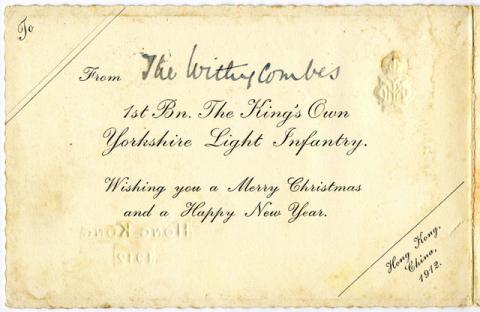 I’ve bumped into him before. Lt Col William Maunder Withycombe was CO of 2nd Bn KOYLI on the western front in 1915 (he survived to retire as a Brigadier (retirement rank) in 1924). There are couple of photos of him in the IWM.

Immediately post retirement he lived in Brecks House, Wells-next-the-Sea in Norfolk, and in 1927 at Heath Farm, Norfolk but evidently moved to Yorkshire later, since he was living at 6, Ingramgate Crescent, Thirsk, when he died. In 1940, when his son got married, he was living in Holt, Norfolk.

So, the Withycombes – he would probably have been a company commander in 1913, or possibly the regimental 2 i/c. 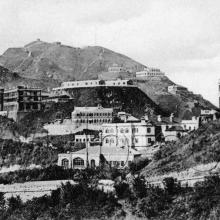 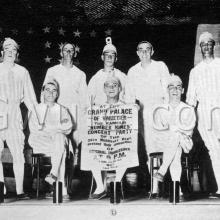