What: Can any readers tell us more about customs at a Naval wedding?

The car in the background is dressed up with ribbons: 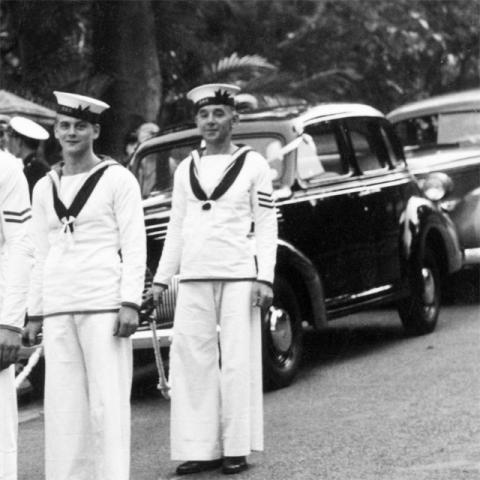 Two ropes lead out in front of it, with these handles attached at regular intervals: 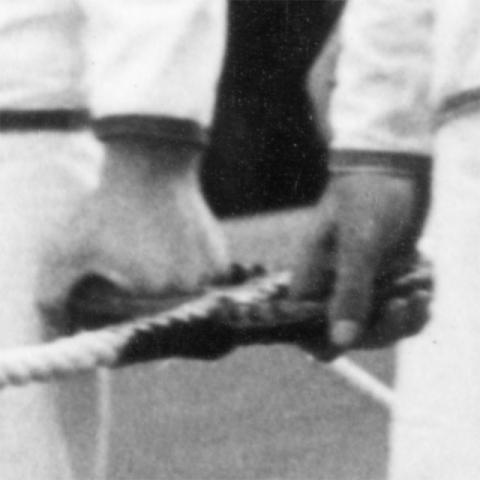 There are four sets of handles per rope, so sixteen men in total. I'm assuming they didn't actually have to do any pulling, as once the driver released the handbrake, gravity would take care of the rest!

Are they a reminder of a time when sailors would actually pull a cart to / from a wedding?

Who: There are a couple of clues on the back of the photo: 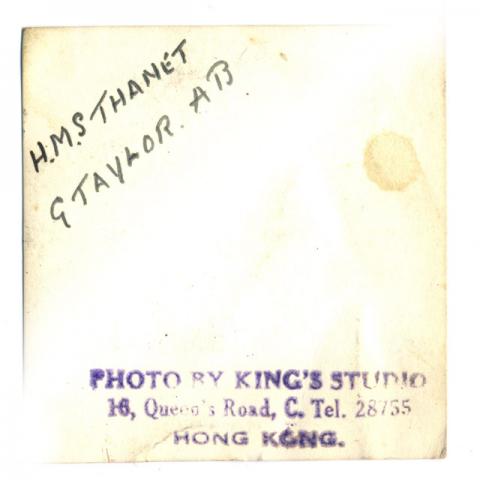 I guess the name in the top corner was the customer who'd bought this print - a Mr G Taylor, ranked 'Able-bodied seaman' (from the 'AB'), and serving on board HMS Thanet. Probably one of the men we can see holding the ropes.

We can also see that the Photographer came from King's Studio at 16 Queen's Road in Central. Older maps [1] show #16 was on the western corner of the entrance to Zetland Street.

The men in the background are dressed differently from those holding the ropes: 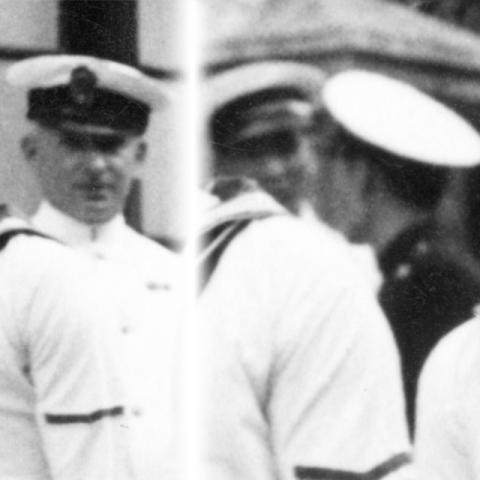 I believe the man on the left in the white jacket is an officer in the navy. How about the men on the right in the dark uniforms - are they policemen?

When: The seller dated it '1930s', but we should be able to narrow that down by finding when HMS Thanet was in Hong Kong.

A search for 'Thanet' in the local newsapers gives several matches. The first relevant match is from 17th January 1938 (The China Mail reports HMS Thanet "was responsible for a Japanese armed trawler releasing a Chinese junk which had been captured"), and the last was on 14th August 1939 (The SCMP reported "HMS Thanet proceeded to Swatow yesterday").

It must have returned from Swatow to Hong Kong, as Tony Banham mentions it left Hong Kong on December 8th, the same day that the Japanese invaded [2]. It sailed to Singapore, and was sunk by Japanese ships on 27 January 1942 [3].

So we know when HMS Thanet left, but was 1938 the year first arrived in Hong Kong?

Where: A church, but which one? I took a walk around St John's Cathedral, but couldn't match any views with this photo. Can you recognise any other church that matches?

Considering the slope behind, just a hunch the location could be the Peak Church.

A quick search led me to this site - Includes Pictures and video.

What: Alun, thanks for the video. It certainly shows a similar event. Based on that I searched again, and found a page about marriage customs from the Navy Chaplaincy, which says: "There is a custom that sailor guests will haul the car or carriage in which the couple leave the church or reception for at least a part of the way."

If anyone knows, I'd be interested to hear how this custom got started, and if it represents anything.

Who: By email from Alun -

I think the first man in the background is a Petty Officer – his cap badge looks too small for an officer, and presumably they had a PO in charge of the party. Officers would most likely have been in the church, then forming an arch of swords as the couple left.

The men in black appear to be local, so they may well be policemen.

And this note from Frank:

The three badge sailor is an Able Rating likewise the two badge sailor.  [...] The sailors are wearing the No 6 Tropical dress and white cap covers over black caps.

This photograph appears to be post WW2 in that the cap ribbons show HMS.  Pre WW2 the Sailors would have the name of the ship on their cap ribbons.

That's a good clue. I found a page about 'RN Cap Tallies', which says rather than "post WW2" as Frank suggests, the photo was taken during WW2:

During the two World Wars various security measures were in force concerning cap ribbons and the need to keep the whereabouts of HM Ships secret.[...] During World War II cap ribbons bearing only the letters "HMS" or HM Destroyers/Submarines" were in use.

I tried a search for wedding in the local papers for those years - but it returned 237 results, which I can't face wading through. A search for navy wedding returned a more manageable 17 results, but none were relevant to this photo.

Where: Moddsey, the Peak Church certainly had the hillside around it, but I can't match up the view above with the photos we have of the Peak Church.

One of the newspaper articles above mentioned a wedding at St Joseph's Church. Could that be the church in this photo, with the cars and men standing on Garden Road?

Thanks for all the replies, you've helped give a clearer story of what we're looking at.

H.M.S. Thanet was due to arrive in HK from Singapore on 21 May 1938 to join the Local Defense Flotilla.

The story of the Japanese armed trawler is dated as 17 January 1939. A typo in the HKPL.

Good catch, thanks. I've sent a message to the HKPL, fingers crossed they'll correct it.

Been looking at the RN marriage/wedding traditions in Hong Kong from the 1930s.

In two weddings in 1938 where the Commanding Officer of a Royal Navy boat got married, the bridal car was pulled by RN Sailors from the church (Union Church  on Kennedy Road and St John's Cathedral on Garden Road) to Queen's Pier and to the Royal Naval Dockyard respectively.  Looking at the slope once again, Garden Road appears as a strong possibility.

Here is the mad dash to the RN Dockyard. Source HK Telegraph 5 Nov 1938 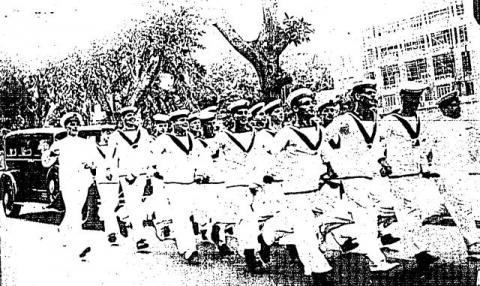 Thanks for that photo. It also shows 4 rows of four men, so that looks like the standard arrangement.

I found a photo of the old St Joseph's church. There are some similarities with the main photo above, but it's not a definite match.

Thanks to Paul Harrison who emailed in that Thanet gets a mention in the book "White ensign - Red dragon",  appendix page A6:

Thanks to Stephen Davies for his comments:

The answer to the tradition of hauling cars is that it goes back to the tradition of pulling the skipper around (pulling the captain's barge) which, if it was a large ship, often had eight banks of oars (16 pulling crew). In very 19th century fashion, this moved ashore as a way of the ship's company showing their affection/respect for their skipper if he got married (or if he died, when they would similarly pull the funeral carriage - q.v. the Royal Navy's privilege at royal funerals (and Winston Churchill's)). There are records of the practice of sailors pulling a carriage along at rural weddings, ships ' crew often being extremely loyal to their captain (especially in sailing ship days before central drafting when the skipper was responsible for finding his own crew) - you'll find it described, I think, in the Aubrey and Maturin series by Patrick O'Brian when Jack Aubrey marries Sophie. I've seen a pre-Raphaelite painting of the same thing in a country church in Kent.

The argument would thus be that the person getting married was Thanet's skipper. The skipper in 1938-41 was Lionel Desmond Bryan Kenny. The trouble is that he didn't get married until 1949.

That said, within a flotilla (in this case the Hong Kong Local Defence Flotilla, HM ships Thracian (Henry Graham Dudley de Chair), Thanet (Kenny), Scout (?) and Tenedos(?)) the flotilla leader's captain would sometimes get a combined flotilla attendance, so although the photo is attributed to an AB from the Thanet, there is no reason to suppose all the matelots are from that ship or, indeed, that any of them are. A search through the papers for naval weddings in 1938-1941 would probably solve the problem...and take ages!

The chap in back is a Petty Officer (no laurel wreath round the badge, so not a Chief, circular lower part to the badge, so not an Officer). The bloke to his right has one pip on his shoulder so is probably a subaltern in some regiment wearing his blues (interesting since all the matelots are in summer whites!)

I found that Henry Graham Dudley de Chair got married on 12 Dec 1936, which is too early for this photo. (No mention of it in the HK newspapers either, so I assume he got married elsewhere.)

The same photo from the King's Studio appears in the HK Telegraph on 5 May 1940.

The naval wedding of Commander, William P. McCarthy of H.M.S. Tamar and Miss Kathleen Steers, Medical Department took place at St. Joseph's Church on 30 April 1940. A lot of dignitaries and guests were invited. The happy couple's car was drawn by the gun team from H.M.S. Tamar. A reception was later held on board H.M.S. Tamar.

Thanks Moddsey, great to have this identified at last.

Another photo of the wedding. Has been a couple of years from the previous post! 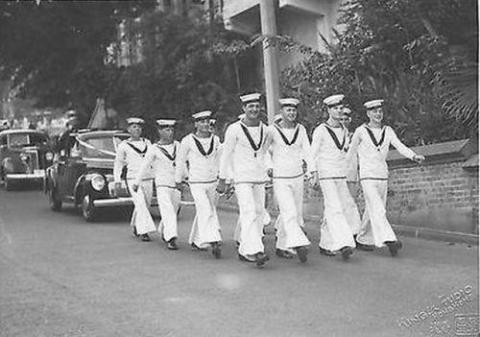 That's a good find - it's amazing what turns up over time! 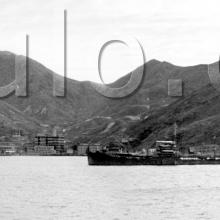 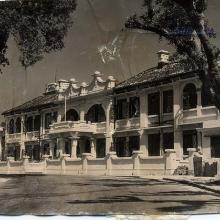 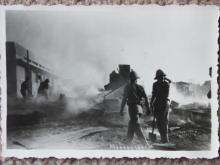