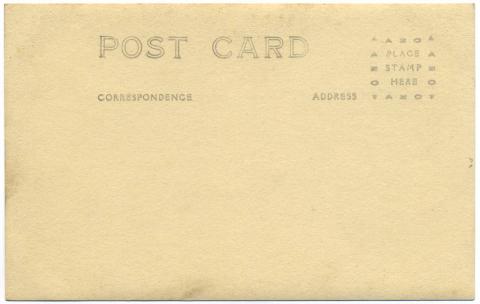 Next the Hong Kong Girl Guides website helps us narrow the range. It says that "The first Company in Hong Kong was formed in the Victoria British School [in 1916]" [2]. But the girls in the photo are Brownies (younger than Guides), so when did they first appear? The earliest result from a search for brownie in the HKGRO and local newspapers is 1922.

What: Do we have any ex-Brownies reading, who can explain what we're looking at? The centerpiece is the shape of an opened umbrella, and decorated with a pixie-like creature: 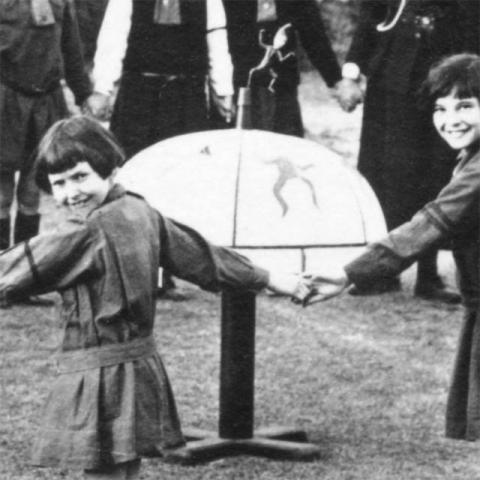 And several of the girls are holding sticks with the same sort of creature on the end: 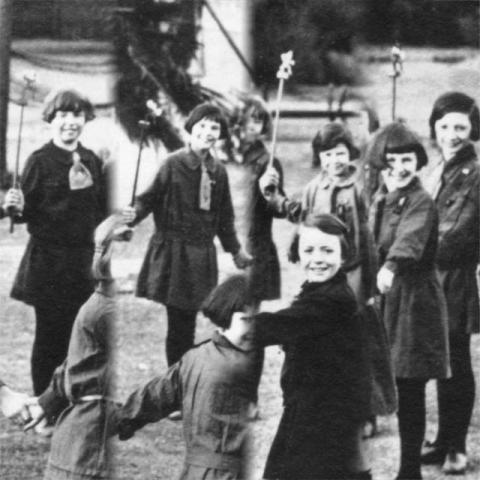 Who / Where: If we know which Pack we're looking at we'll know where they are, and vice-versa. Packs first - the annual Education Report for 1922 [3] says:

The Peak and Wanchai Brownie Packs were maintained, and a new Pack was started at Kowloon. The total average enrolment was about 50.

Then a newspaper article from 1926 [5] gives an update, listing only four Packs:

If no-one recognises the Pack, how about the buildings in the background? Extra clues are the flagpole on the right: 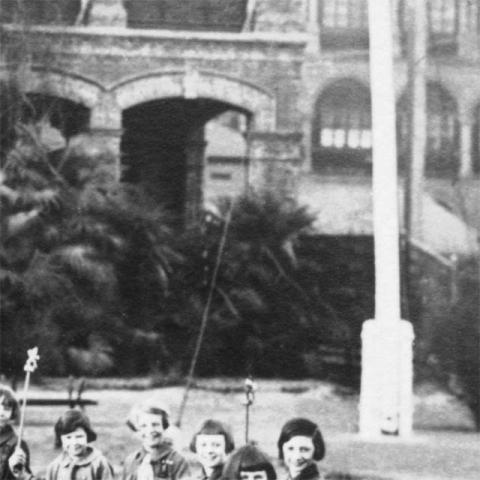 And the grass, which looks as though it is marked out for sports: 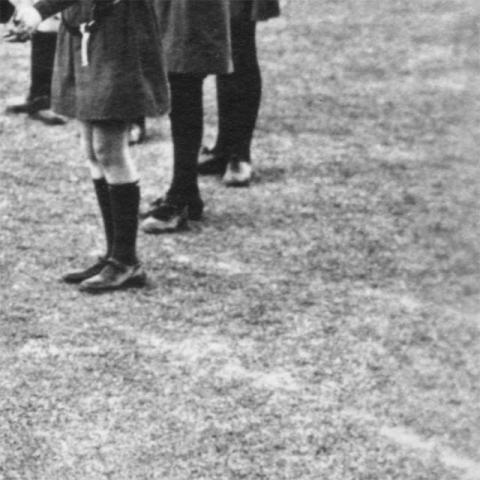 The umbrella-like object is a Brownie toadstool. We had one for our Nuwara Eliya Brownie pack in 1950s Ceylon. Brownies (the supernatural variety) were supposed to dance around a toadstool and it is an essential piece of equipment for a Brownie pack. This Hong Kong one is smarter than ours was. I expect more recent Brownies can give you more detail about the song or chant that you sing as you dance round the toadstool.

Yes, it was sold as a Hong Kong photo. It's not 100% sure of course, but the plants in the background look right for out here.

Thanks for the extra info about the toadstool and the "sticks". I was a cub scout, where it was all a lot simpler - just a different coloured plastic ring around the neckerchief (a "woggle", if I remember correctly) to identify which six you belonged to.

I was a member of the Quarry Bay Brownie pack in 1966, and was a Pixie. That is probably what the sticks represent, there were four groups, Elves (Blue), Pixies (Green), Fairies (Yellow) and a red group I cannot recall.

Thanks Mollie! I did a quick google search using your reply, and found there were six commonly used emblems: Elf, Fairy, Gnome, Imp, Pixie, & Sprite.

Recently viewed at an auction house website. Same group of girls. The back of the photo postcard which is similar to David's says Hong Kong. Looking at the building on the left, I am not too sure. Anyways, good for discussion. 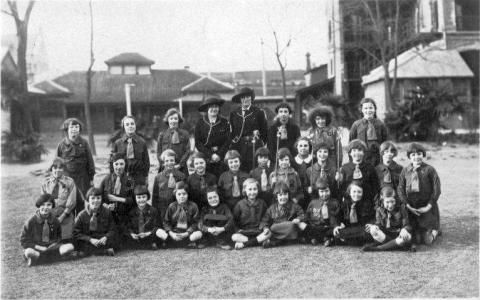 Inspection of Brownies & Girl Guides by Prince of Wales?

Is there any record of the Prince of Wales inspecting the Brownies and Girl Guides packs during his visit? I know he asked to visit various schools, so maybe this was done on a school by school basis, or perhaps they took part in a larger event.

Inspection of Brownies by Prince of Wales

Many thanks for guiding me to this reference, moddsey. I had missed it and will now look it up.

There is a link within gwulo

There is a link within gwulo of the 1st Kowloon Brownies

...where a hypothesis was put forward that the grounds of the old Kowloon or Central British School next to St Andrew’s church on Nathan Road was used as a similar photo showing the prefects of the school in 1934 in same ground.

The builidng type, flagpole and sports ground would suggest the buildings unlikey used for purely residential purposes but more communal use (school? clubhouse?) Some damage noted on the mat shed type roofing over verandah on the right of photo (post-typhoon or heavy rain damage?). No leaves on the trees and girls wearing long sleeved clothing and women heavy frocks suggest winter time when photo taken.

1922 Inspection of Girl Guides/Boy Scouts by Prince of Wales (Part I), by China Mail

Inspection of Girl Guides by Prince of Wales

Many thanks for copying these articles for me, moddsey. I wanted to see if my aunt, Evelyn Warren had been mentioned as present at the inspection of the girl guides by the Prince of Wales - and she was!

Good! Only photo I have seen of the inspection can be viewed here

That's a great photo! I was gloomy that no photos of 1920s Hong Kong Girl Guides had yet emerged on Gwulo, but I think I can just make them out in the background. The sartorial combination worn by the Chief Commissioner (Rev. G.T. Waldegrave?) of shorts, knee socks and dog collar is rather impressive! I imagine the lady walking behind the Prince is the troop leader of the Guides - perhaps Miss Reed? I will dig out a 1922ish photo of Evelyn Warren at the races standing next to a gentleman in a dog collar, but probably not Waldegrave. I'm most grateful to you and also to David for spotting Evelyn's involvement in the Hong Kong Girl Guides, which I would otherwise never have known about.

Lady Stubbs (Governor's wife) was Chief of the Girl Guides and is the lady in the photo.

Thanks for that. I need to mug up on the early history of the Girl Guides in Hong Kong. 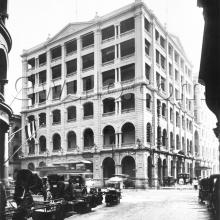 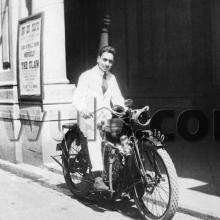 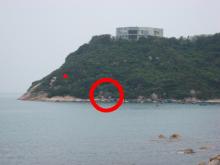