What: "The best hotel in Hong Kong", at least that's what whoever bought this postcard thought: 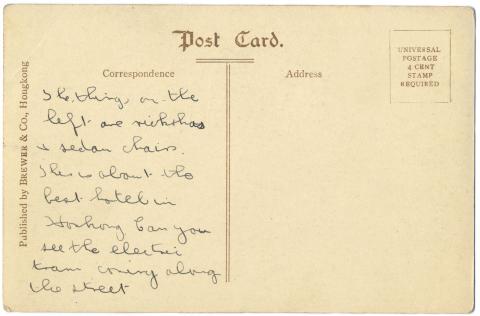 The things on the left are rickshas and sedan chairs.

This is about the best hotel in Hongkong.

Can you see the electric tram coming along the street?

Given the question at the end, I guess this was included with a letter sent home.

Where: The photographer is standing in Pedder Street, looking south across the junction with Des Voeux Road & Chater Road. Mansions Building was on his left, the General Post Office to his right, and filling up the centre of the photo stood the Hong Kong Hotel. The Hotel was in its prime, extending along Pedder Street from Des Voeux Road all the way to Queen's Road.

Who: An Indian man is looking at us from across the junction: 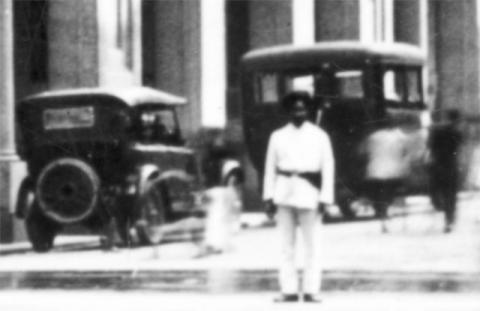 We can only see him clearly because he is standing still. The ghostly figures around him show preople on the move - films then needed longer exposures, so anything moving appears as a blur. For an extreme example, look in front of the hotel's corner pillar and you'll see a disembodied foot! It belonged to the man carrying the sedan chair that appears as a shadowy outline further left.

In the left foreground are the rickshaws and sedan chairs mentioned above. Several of the men among them have noticed the camera and look towards us. But the men at the front of the queue look intently ahead. I guess this was a rickshaw / sedan chair rank for hotel guests, and the men are waiting for a nod from the hotel doorman that their services are needed.

When: The section of the hotel we see is the north wing, finished in 1892, and destroyed by fire in 1926. That gives us a broad outline for possible dates.

The tram helps narrow it down: 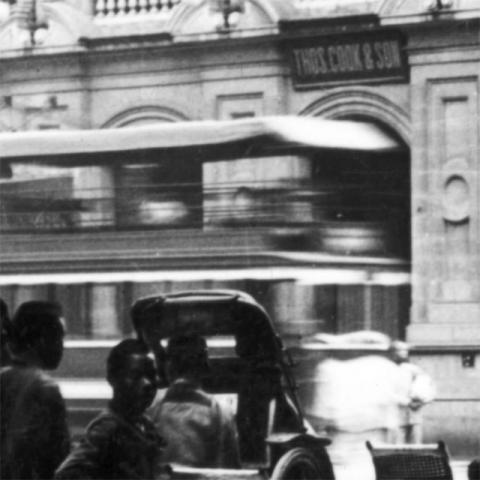 We've seen before that their top decks didn't get a canvas cover until 1918 [1], so the photo must have been taken later than that.

Other possible clues come from business names we can see in the photo. The tram photo also shows the sign of "Thos. Cook & Son", the travel company. Then on the left of the photo there's another name carved into the stonework in the Mansions Building: 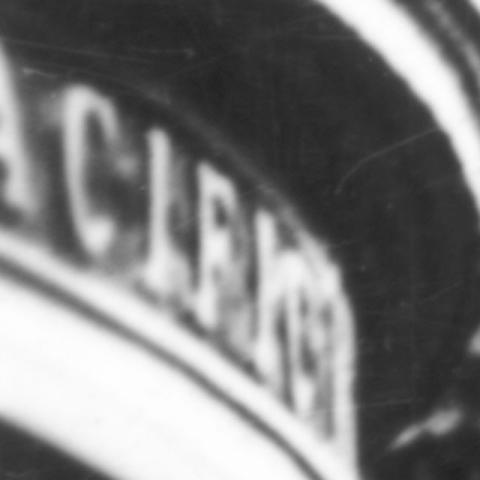 It looks like part of the word "Pacific", and is likely the name of a business with a shop or office here. Any ideas when these businesses were at these sites?

Behind the Indian man are a couple of cars. If anyone recognises the models, they might help too.

The flag at the entrance of Union Building does not match the house flag of Canadian Pacific.  Does anyone know what flag or ensign it is?  Thanks!

Thanks for the extra information. I've also received an email from Axel pointing out this eBay photo. It shows the Connaught Road side of the Mansions / Union building, where the "Canadian Pacific" is clearly shown: 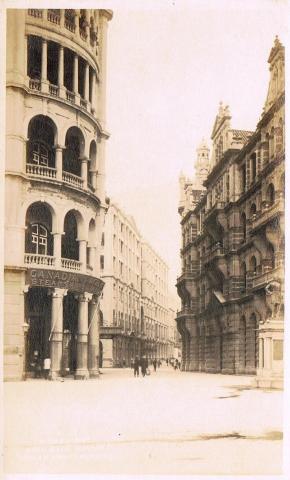 C, I hadn't thought about flags before. That would be an interesting topic to document.

The Canadian Pacific name led me to Wikipedia's description of the Union Building. It mentions that the building:

Could the Steamboat company be your flag?

During 1940s & 1950s Thos. Cook's office was right on the seafront, not far from Butterfield & Swire/Swimming Club/Naval Dockyard area.   But in a street map of Hong Kong Central Cooks is shown in Des Voeux Road, right next door to the Hong Kong Hotel.  This map is in an ancient booklet called 'Picturesque Hong Kong' probably dating in mid-1920's.

I wasn't in HK when the HKHotel fire took place, but was there in late 1928 or early 1929 when the King Edward Hotel in Central caught fire.   With some other children  from the Garrison School on Garden Road, we trotted down to Central in our tiffin hour to view the scene.  The fire was out by then, but hoses were still dribbling water in the gutters.   About 7 lives were lost, we were told that some of the victims missed the safety nets held out by firemen below.

Many years later I read a library book called 'Squeeze' set in Hong Kong, and featuring the hotel fire. 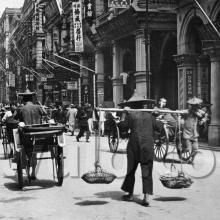 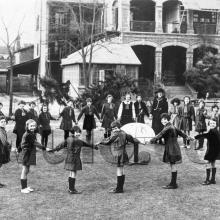