What: Trestles, planks and mats like these can still be seen in Hong Kong's fishing villages. They are used to dry seafood and so preserve it.

There are a couple in use in the photo. Rows of fish on the left: 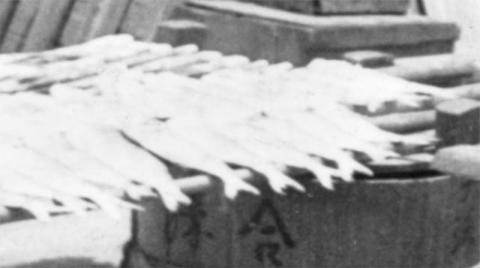 And round trays (shrimps maybe?) on the right: 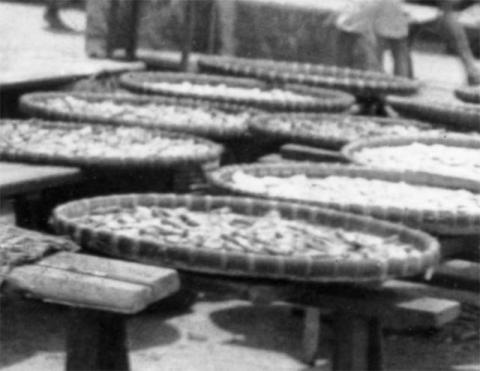 Several of the planks rest on sturdy wooden tubs. I believe they were used to hold fermenting shrimp paste. Can anyone confirm?

Where: The wooden tub in the foreground tells us where we are: "大澳" 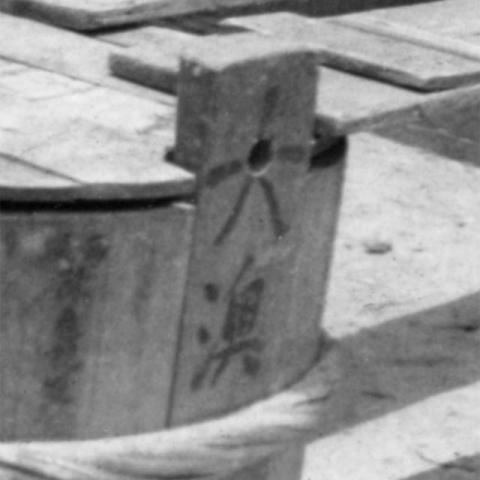 They are the characters for Tai O, the fishing village on Lantau Island. Do you think they're showing a brand? Or is it just an owner's mark to stop people from pinching them?

If any readers are familiar with Tai O, can you recognise where this photo was taken? I remember seeing old buildings along the streets there, so there's a chance one of more of these buildings are still standing.

Who: From the shadows it looks to be mid-day on a sunny day. Good for fish to be out drying, but not for people to be out working. The only people we can see are a couple of men hurrying past in the background. 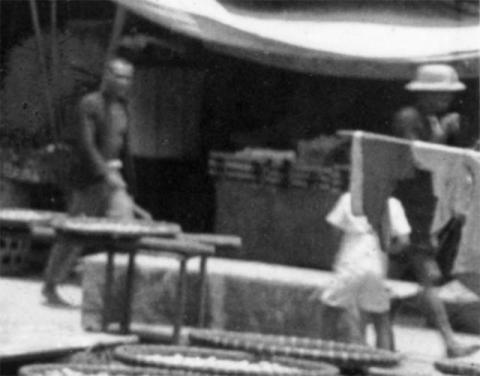 When: There aren't any dates or notes on the back of the photo. The only clue I can see is the Topee the right-hand man is wearing. Based on previous conversations about Topees [1], I'll guess the photo was taken in the 1930s.

Trivia: Tai O's fermented shrimp paste has a strong smell - delicious or stinky, according to taste. My mum & dad once packed a jar of it to take back to a Chinese friend where they lived in Wales. Unfortunately the jar cracked en route...

The good news was that it was easier than normal to find their suitcase on the Heathrow conveyor belt! I don't know what the sniffer dogs made of it. The bad news? Despite several attempts at cleaning it, the smell of shrimp paste was there to stay and they never used that suitcase again.

There are other Chinese characters on the tubs, most likely showing the fish stall or fishing boat or shop or distributors who own the tub.  That appeared to be a tradition about a wet market.   Vegetable distributers, chicken/duck distributors also have such marks in their cages or containers.

On the other hand, those tubs are multi-purpose containers:

1.They are water tight.   They could be used to store living fishes or other goodies;

2.If the lid is secured by other means, they are also air tight to a certain extent.  Common commodities like rice, sale, flour, beans and any other wet or dry goods could be stored within;

3.Certain these tubs could be used to make salted fishes with salt and fishes in layers;

4.They could be used as water tanks;

5.I am not familiar with the process of making fermented shrimp paste, however these tubs could be used as the fermentation tank of sort;

Thanks for the extra information. Those tubs were used in a lot more ways than I'd been thinking.

I think there's an exhibit that talks about making the shrimp paste over in the Hong Kong Museum of History. I'll have to take another look next time I'm over there.

A couple of replies about the hat and the date. Here's the hat again: 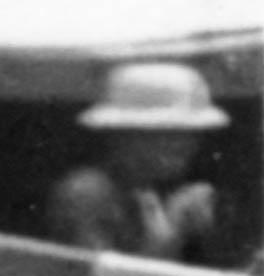 I think it is more like the early 50's. The hats were still very popular throughout the 50's and were available from the shops in the lanes in Central. Remember wearing them to school early 50's. Both white and taupe!

I'm not sure - I bought this photo as a group of 6. The only one with a date written says 1940, but they all look to be pre-WW2. (I spend several hours cleaning them up beofe they're posted here. The original is yellowed and faded.)

I scanned down the photos on the 1950s tram ride page. There are just a handful of Topees in sight, a few cyclists and a delivery man wearing them. They don't look popular otherwise - any chance that Topee's were still bought for children in the 1950s, but had gone out of fashion for adults?

Another reply comes from Bill Duff by email:

The photograph certainly has a 1930's feel about it - perhaps even late twenties.  The topee on the chap in the background is perhaps not one of the type colonials would have worn.  I bought one which I think is very similar to the one shown, at Stanley nearly forty years ago.  It was locally made and locals were wearing them.

I can picture the hat Bill means, and they were popular with fishermen. But the hat above looks more like a standard Topee - the sloping brim makes a sharp angle with the crown, whereas I think the hat Bill describes has more of a curved profile.

Thanks for your replies, 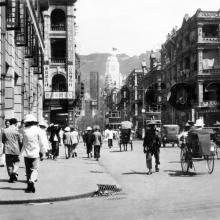 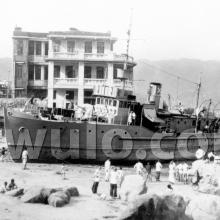