Kowloon Wharves after the 1906 typhoon

When: The strong typhoon had hit Hong Kong on the 18th September, 1906.

What: This photo, taken shortly afterwards shows a couple of the large ships that were driven ashore.

Does anyone recognise the ships? I am out of Hong Kong for the next few weeks, so I don't have access to any history books.

Where: Kowloon wharves, near today's Ocean Centre and Harbour City. These little wagons often appear in old photos of the wharves. They were used to move goods between ships and the wharehouses: 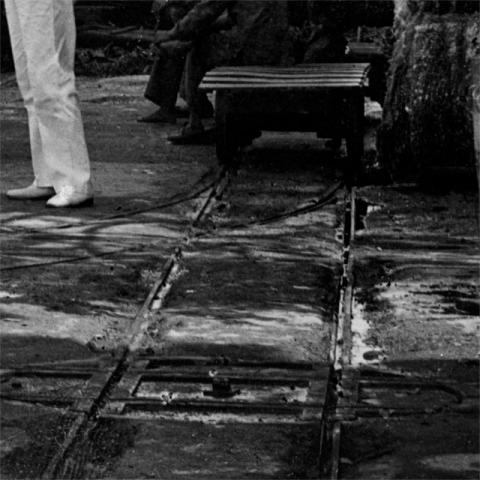 Who: Three different groups of people are seen in this photo: 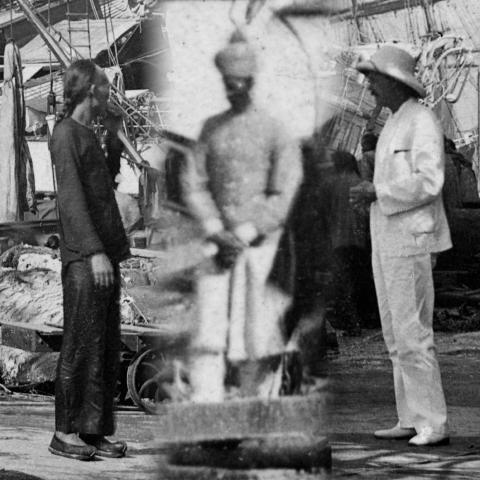 I wonder what is the role of the man wearing the turban?

Trivia: The shoes that the Chinese man is wearing look just like the shoes we saw in the 1917 photo of the Middlesex regiement's concert party (see http://gwulo.com/node/9084).

I have similar photos. The ship with the single funnel is the S. S. Petrarch whilst the boat at the northern end of the Wharves is the four masted barque S. P. Hitchcock. 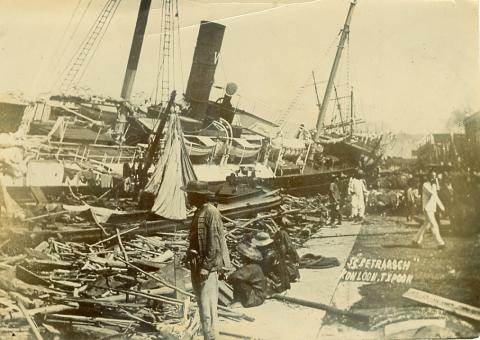 Thanks for the names & extra photo. I found an article with brief information about the ships damaged in the typhoon, http://paperspast.natlib.govt.nz/cgi-bin/paperspast?a=d&d=NZH19061102.2.9, including:

It looks like a "W" on the Petrarch's funnel. Does anyone know which shipping line that represents?

Hi David I have approx. 30 original pictures that were taken after the typhoon they have been handed down to me they come in an old Chinese photo album.Most of the pictures I have have pencil righting on the back of them. I would be glad to help you out with any information I can give you. regards Haden

Thanks for helping, you're lucky to have that album in your family!

We've got a small collection of photos from the 1906 typhoon at:

If the pencil notes add anything interesting, please could you add a comment to the relevant photo?

And if you have any photos that aren't shown there, it'll be great if you can upload them here for us to enjoy (instructions at: http://gwulo.com/node/2076).

I had a look at the photos you have and i have two or three of them but also have aprox 25 or 30 that i havent seen on here.i will hafto get some help to upload the pictures for me because im still not verry expirianced on the computer.i will get around to it as soon as i can.I will hafto get the pictures out of the album and put into the computer and then i should be able to send them to you.Some of the handwrighting on the back of the pictures is hard to understand but i can work most of it out.

Thanks Haden, I'll look forward to seeing those. Let me know if you run in to any problems uploading them.

No worries david.Im on break in 4 days time i will have a go then.

Sorry i took so long but i had trouble trying to send the pictures.I got as far as uploading all of them and i couldent send them for some reason. i have however had them all put on a memory stick'and a disk also have them on a file on my desk top.If you like you can send me your email and i could send them to you and mabe you could put them on the site for me. or i could post a cd or memory stick to you if you like.

The "W" on the mast of the S. S. Petrarch stands for the German shipping company, R. Wahl. Some information here 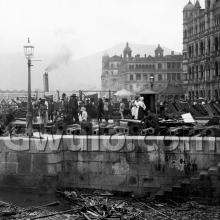 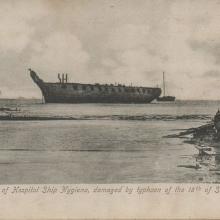 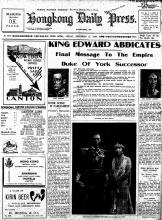