Where: This postcard shows the heart of Central, looking east along Queen's Road. The junction on our left leads into Theatre Lane, while the break in the shadows on the right marks the junction with D'Aguilar Street.

Who: Here's a closer view of some of the people on the streets: 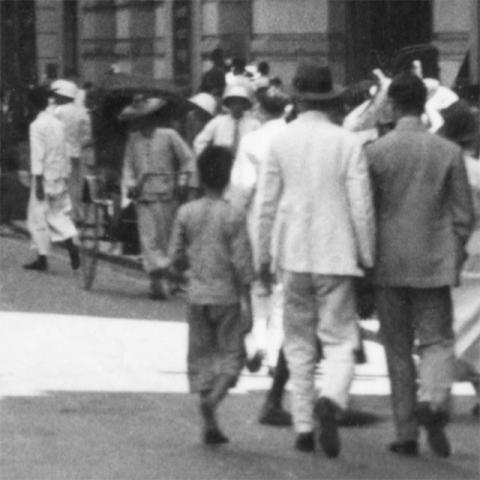 There were plenty of offices nearby, so they could have beeen working locally. Or they might have been visiting one of the local cinemas or restaurants. There was the Queen's Theatre [1], just out of sight to our left, or across the road on the corner of D'Aguilar Street there was King's [2]: 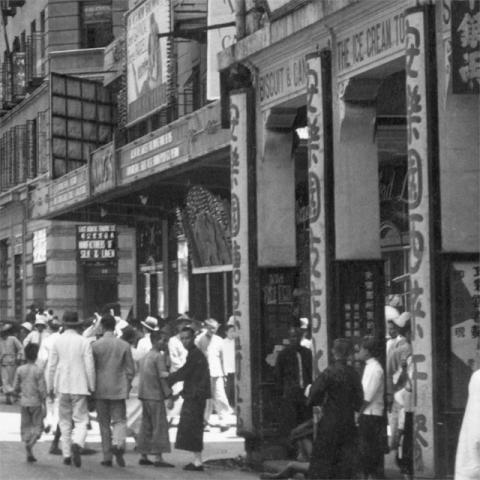 We can see a couple of options for eating too. To the right of King's the three pillars have Chinese characters which I think read "On Lok Yuen". Across the front of the building we can read "Biscuit & Can??, The Ice Cream To???, S??? ?o???ain", probably Biscuits, Candies, Ice Cream, and Soda Fountain.

We've seen another On Lok Yuen store down on Des Voeux Road [3]. Were there two branches, or did they start here then move over to Des Voeux Road later?

If you preferred something savoury, back across the road there's a sign pointing to the Queen's Cafeteria: 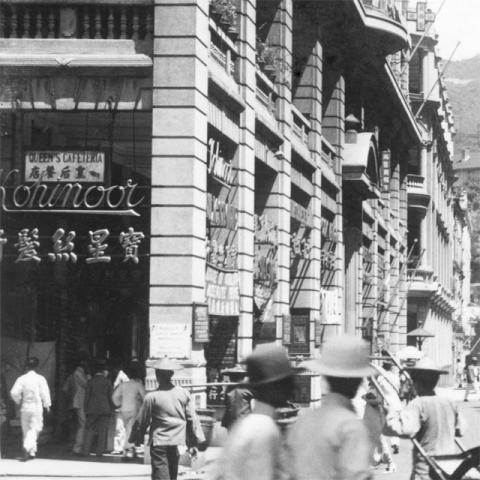 (There's also a sign advertising "Kohinoor". Today that's the name of an Indian restaurant in Hong Kong, but does its history stretch back this far?)

When: This photo comes from the same soldier's album as several of the recent photos I've posted. Again I'm estimating a 1930's date, not 1945 as he'd written. Luckily we've got a cinema in the photo, and with a bit of work we can stretch their poster back in to shape: 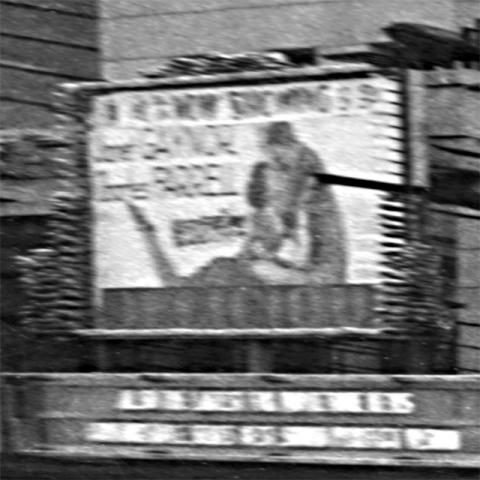 "Delicious" starring Janet Gaynor and Charles Farrell. It was released on Christmas Day, 1931, and reviewed in the next day's New York Times [4]:

The Roxy was crowded yesterday afternoon and a throng waited in the rotunda for the first showing of "Delicious," a film which is being exhibited simultaneously in 162 theatres throughout the country. That popular team, Janet Gaynor and Charles Farrell, act the leading rôles in this production, for which George Gershwin composed the music and his brother Ira contributed the lyrics. The story, which is credited to Guy Bolton, is a conventional piece of sentimentality with dialogue that is scarcely inspired.

I guess it took a while to reach Hong Kong, so I've dated this photo to 1932.

What: The building with the Kohinoor sign is the old China Building [5]. Just beyond it, at the junction with Pedder Street, there is one of the old umbrellas / pagodas that gave the traffic policeman standing there a bit of shade: 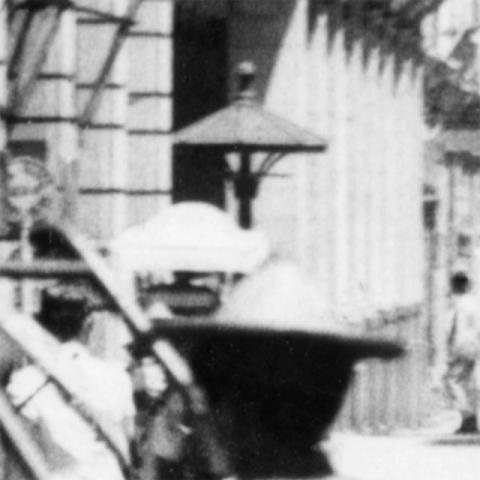 Most of the buildings along this stretch of the road are a similar height, five or six stories tall. But further along on the right there is still one of the earlier generation of buildings: 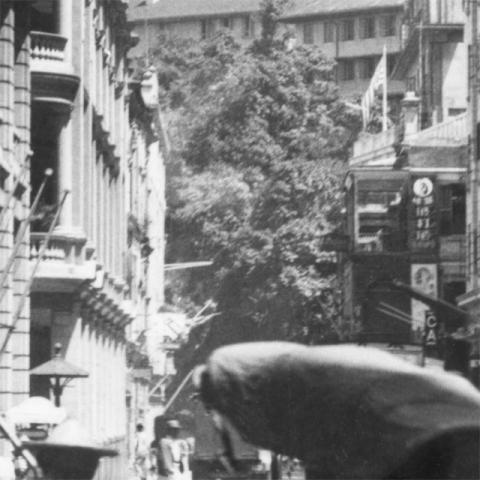 It's a lower in height, and extends further out into the street. (If you look back at older photos of Queen's Road, you'll see it was originally much narrower than it is today.)

Up on the roof of the building there's a flag. Can anyone recognise what it represents?

Looking higher up we come to the pitched roofs of the old Central Government Office buildings [6]: 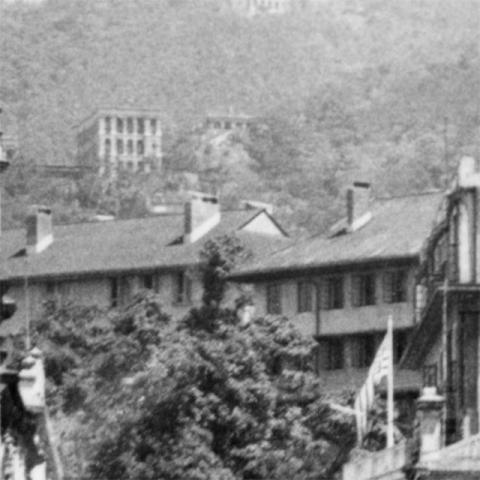 And finally above that is a three-storey building with a bridge on it's left. That was part of the Bowen Road Military Hospital [7]. I thought this could be one building shown in the photo that is still standing today - but though the main buildings of the hospital are still here, this block has already gone...

PS This photo, http://gwulo.com/node/14120, shows a very similar area but looking in the opposite direction.

Re: Flag on Building - Stars & Stripes

Permalink Submitted by moddsey on Sun, 2014-03-23 13:48.
The building with the flag should be the National City Bank of New York situated on QRC between Ice House and Duddell Streets.

re: Flag on building

The flag only has four or five dark stripes. I don't think that's enough stripes to be a stars & stripes?

I don't think we can see the National City Bank Building. The lip sticking out from the taller building (at about the same height as the top of the flagpole) looks too thin when compared with the Bank Building in this photo:

It might be a match for the building west of the Nat. City Bank though, a sliver of which can be seen in that Flickr photo.

The large Chinese characters over the ON LOK YUEN says Ho Ying Kwong which was a medicine shop I'm told. Later it would be occupied by the BATA shoe shop entrance from D'Aguilar St.

Regarding the 3 pillars/columns fronting On Lok Yuen, besides the name at the top of each it mentions Western Style Lunches (nearest) and Confectionery (farthest). The middle one just mentions 'branch'. I suspect the one on QRC was earlier and preceded the one on DVR C.

He also makes the same suggestion as Moddsey, so maybe I'm wrong on that one:

I suspect the mystery flag you referred to was the Stars & Stripes atop the FNCB bldg, correct me if I'm wrong. 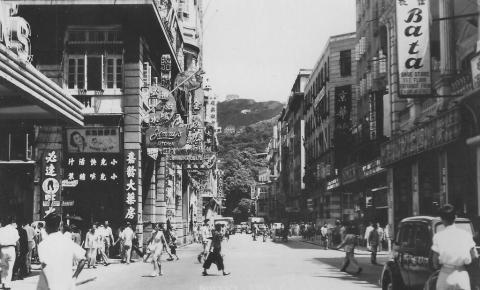 As many readers will know, while "Kohinoor" may indeed be a current HK Indian restaurant, in the 1930s the name's ordinary association would have been with the Kohinoor diamond, once the largest in the world.  Hence a figure for supremacy.  Having been expropriated mid-19th c. from the Sikhs by the British E. India Co., and recut to increase its brilliance, the stone was set in a brooch for Queen Victoria, then later into Queen Alexandra's crown.  It currently resides with the crown jewels in the Tower of London, though the Indian govt. recently asked Mr. Cameron for its return.  He declined.

The On Lok Yuen Cafe was situated at 36 Queen's Road Central. It was a branch of the main cafe on Des Voeux Road Central.

The film 'Delicious' starring Janet Gaynor and Charles Farrell screened at the King's Theatre (34 Queen's Road Central) from Sunday 1st May 1932 to Saturday 7th May 1932. So the photo was taken in the first week of May 1932. 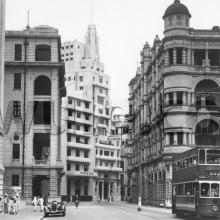 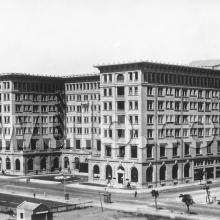