Where: We're looking west along Des Voeux Road in Central, with HSBC on the left, Prince's Building and Statue Square on the right.

When: This is another photo from the serviceman's album that he'd dated 1945, but was actually taken several years earlier. Let's see if any of the buildings can help narrow down the date.

This facade shows a very new-looking "The Hongkong and Shanghai Banking Corporation": 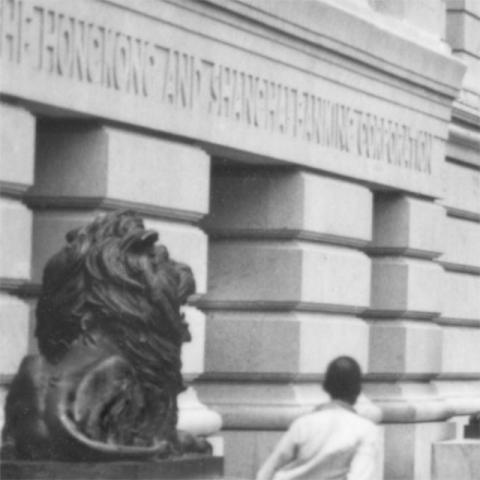 This view also confirms it can't be a 1945 photo, as the lions weren't here that year. They'd been taken to Japan during WW2 to be melted down for scrap. Fortunately they survived the war, were recognised as the HSBC lions, and returned to Hong Kong. But they weren't re-installed here until October 1946 [2].

Just past HSBC, the pavement runs through this covered area: 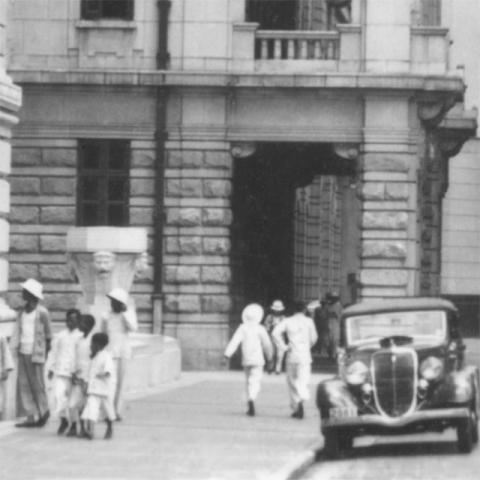 I only know its address, "4, Des Voeux Road Central" [3], though other photos show it survived WW2 so it doesn't help us with a date.

Beyond number 4, we can just make out the front of the Bank of Canton building [4]. Then after the road bends to the right, we get a much clearer view of the next few buildings: 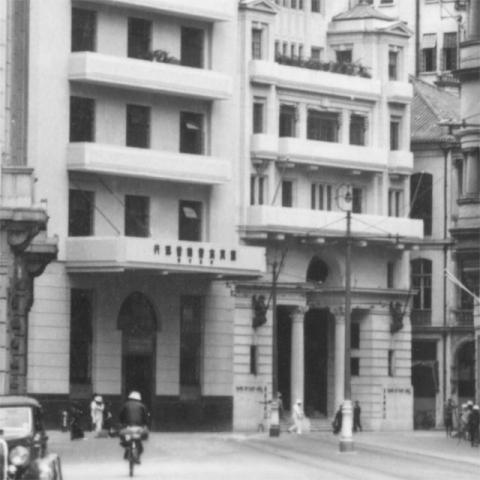 The building beyond the cyclist is Kwok Man House [5]. It's looking new as well. Does anyone know the year it opened?

Right from Kwok Man House is the Bank of East Asia Building [6]. It was their second building on this site. It opened in 1935, the same year as the HSBC building, so no help there.

But the next building to the right, an older, three-storey building with a pitched roof, does help. We know this was the Powell Building [7] but that by 1940 a new building, Windsor House [8], had replaced it.

What: The road is quiet, but we can see several different vehicles: 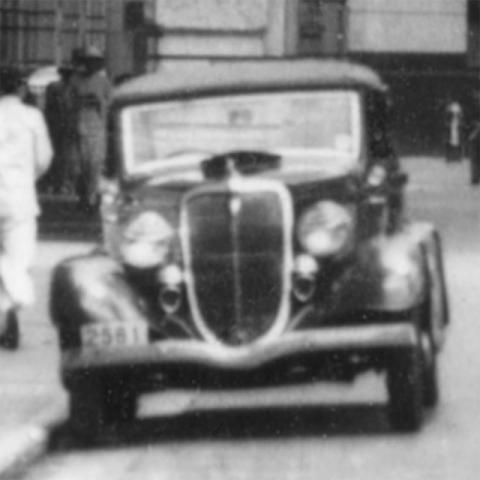 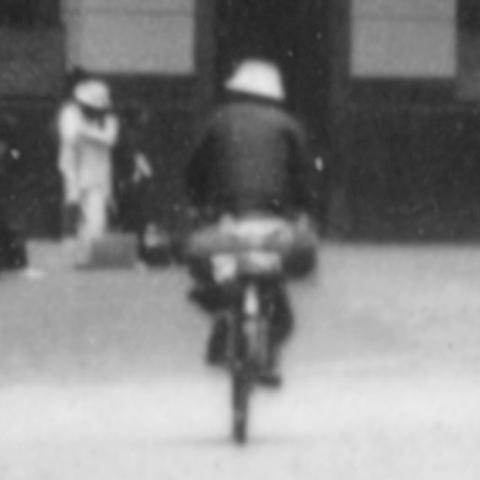 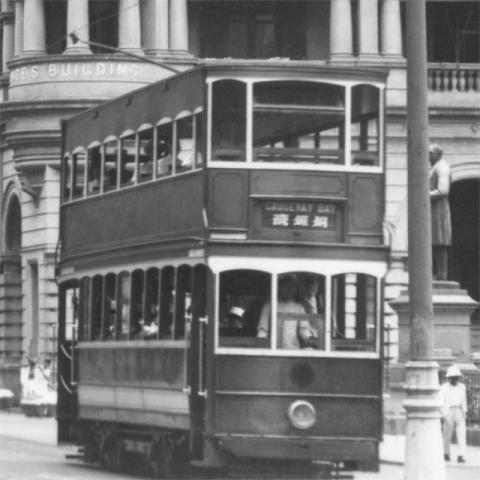 If we have any car or tram experts reading, do they help identify the date in any way? (And if you can date the photo from the bicycle, I'll be very impressed!!)

Who: Over on the left is what looks like a family group: 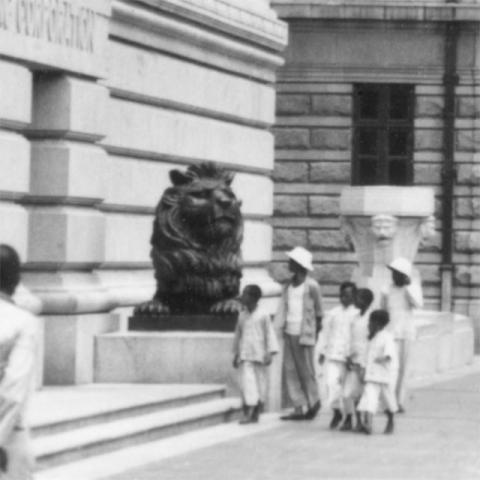 When I first saw the photo, I thought they were looking at the lion. But with this close-up, I'd say they're looking inside the bank. It was certainly an eye-catching interior, with its colourful murals: 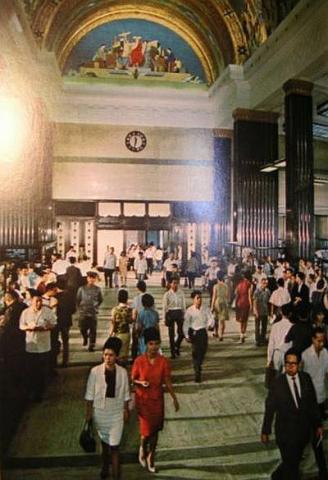 Across the street and behind the tram are these two men: 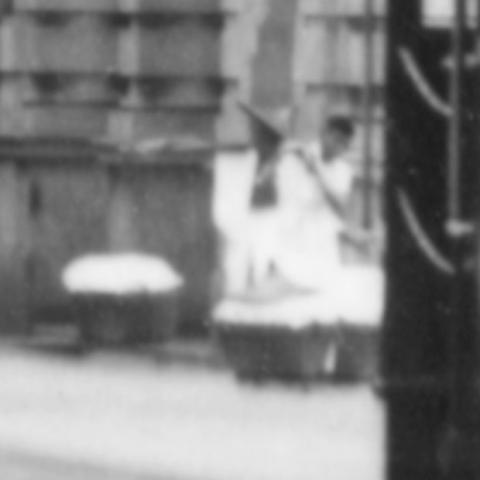 It looks as though they're carrying baskets of something on shoulder poles, but I can't make out what it is.

The people in the bottom-right corner are easier to see: 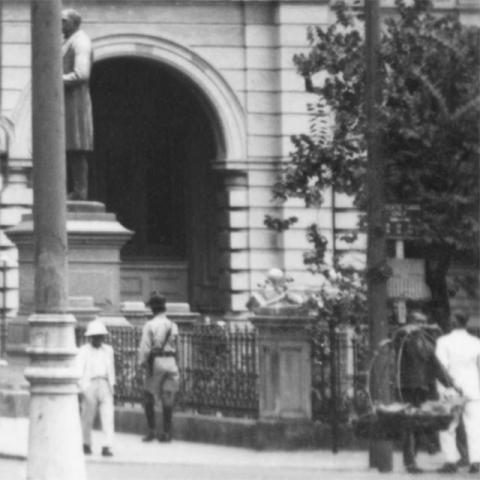 The main in the white suit, far right, appears to be studying the signs in front of him. The upper sign says "Private Cars Only", referring to car parking in Statue Square. Left from him is a hawker carrying baskets of his wares, and left again is an Indian policeman, walking away from us. Above them all, Sir Thomas Jackson stands on his plinth, keeping an eye on his bank across the road.

There's a picture of saloon versions at

The front bumper with a dip in the middle only seems to occur on cars after 1935 - though the straight bumper is sometimes seen in the pictures of 1935 and 1936 cars.

Always possible, but.....
the Triumph has "side markers" on top of the front wings, the ford has them just in front of the doors.
The Triumph badge on the grill is quite large, and there is no emblem below it, the Ford has a smaller badge, and an emblem in the grill below it.
The Ford has an opening  air intake in the center, just before the windscreen, the Triumph doesn't.
I'm not sure that the triumph buper is low enough to see the bottom of the grill, but you can in the Ford.
I could be wrong, cars of the '30s are not my specialist area.

Thanks for the replies. It certainly looks like the car on the left in the modern photo.

Was that little air intake in front of the windscreen the closest you got to air conditioning in the 1930s?

Thanks to Ian who writes:

Taken advice on that photo of the Tram from an expert ex-HKT who says the closest he can get is ' circa 1937 ' as he has other similar ones marked the same.

Looks like Nos. 6 and 10 Des Voeux Road Central were respectively the Bank of Canton and Bank of East Asia Buildings. No. 8 would have been Kwok Man House. But looking at the photo posted, it would appear from the Chinese characters on the front of the building that it was called something else instead.

I refer to your posted photo which shows "2 adults + 4 children looking curiously outside HSBC on Des Voeux Road..........."

In fact, one could not see the grand interior of the HSBC banking hall from road level of Des Voeux Road Central.  The banking hall was on the 1st floor, and there were flights of steps between ground level and the banking hall.   Even if one used the entrance on Queen's Road Central, there were still some short steps on both sides.

Any way it is great to see the grand interior of HSBC banking hall and its ceiling again.

Thanks for the correction.

You can see more photos of the grand interior at:

Here is a photo taken c1983 showing the HSBC entrance at Queen's Road Central.  It only shows one of the two-side entrances. 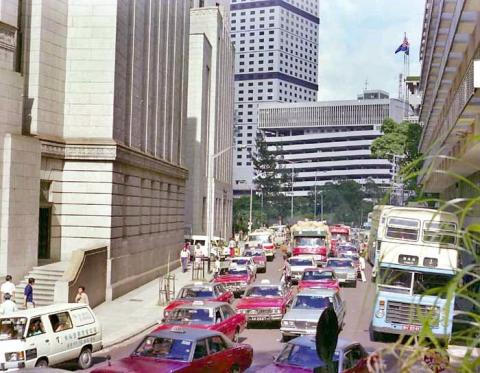 8 Des Voeux Road Central was the National Commercial & Savings Bank. See this photo. The Bank was completed in 1933.

Actually there is a good picture from "1950s Pauline's Photos" which shows the HSBC entrances (left, centre, and right) at QRC in 1950s.   I think older HSBC customers do remember the steps. 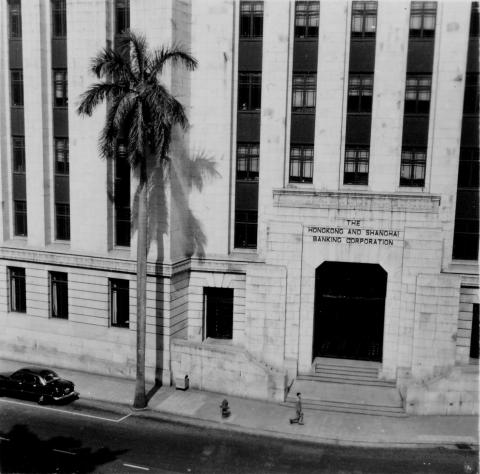 When I worked for the Bank back in the day, one of my offices was just to the left of the palm tree - I was on the 1st floor with that long smoky window looking out onto Queen's Road C!

Thanks for the memories :)

The picture of the unidentified 1925 type car is identical to a picture in'Hong Kong Tramways 100 Years' by Mike Davis. Featured on page 28 the picture is credited as a commercial postcard from the Alan Cheung collection. According to the caption the car is in the livery carried immediately prior to World War II.

Re: Date of Photo

The same photo appears in Early Hong Kong Tramways by Cheng Po Hung on Pages 83 and 109. The date given is circa 1935.

Thanks for the extra sources.

Thanks for the extra sources.  I'd like to have a summary page on Gwulo with the different generations of trams listed. Not til after the upgrade though!

The car on the left no.2561. The tram was in red paint without livery. Dated probably 1933 onwards.

I think the building (No 4) next to Hongkong Shanghai Banking Corp must be Chartered Bank. They had an entrance in both Des Voeux Road and Queens Road as indeed do both banks today.  Philip 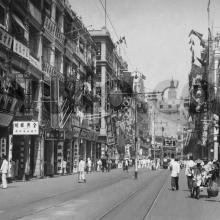 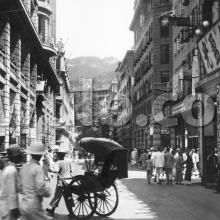 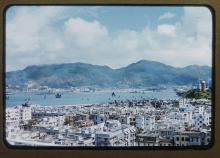