A long way from its origins.

I photographed this apparently derelict ferry in 1982. It was moored in the outer harbour.

Built in Cowes, Isle of Wight, UK in 1960 as the CEASAREA for the British Transport Commission as a cross-channel ferry to be operated by British Rail.

It took this role principally on the long distance Weymouth-Jersey, Channel Isles route, but also operated on the shorter sea crossings to Boulogne and Calais.

The ship’s final crossing to Jersey was in 1975. Leaving the UK in 1980 she arrived in Hong Kong bought by a Hong Kong company as the AESAREA. Following the usual practise with sold-on ships with an uncertain future, it retained part of the original name.

Sold to Philippine owners in 1984, in 1986 she was moved to Japan. The same year she was finally sold to Korean breakers for scrapping.

Interesting for such a small vessel, she was steam powered with two steam turbines for propulsion.

This must have been a problem to find engine-room crews for her by the 1980s when diesel engines were the much preferred cheaper to operate power sources.

Zooming-in on the stern of the vessel in my original transparency, the name CEASAREA can be seen with the ‘C’’ painted over.

Underneath it is a plate showing ‘WEYMOUTH’ in worn and corroded lettering as its original home port. 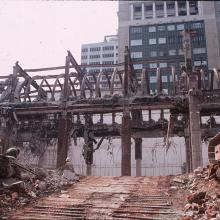 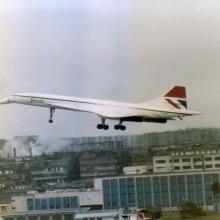