This pier was built in the 1870s by the Chinese government. It changed shape several times, as reclamation ate it up from the landward end, and different extensions were added to it at the seaward end.

The pier disappered completely in 1942, during further reclamation for the expansion of Kai-Tak airport by the Japanese .

The closure of the airport in 1998 meant there it was possible to excavate the area. This was done in 2008, showing that several sections of the piers were still in place. If you zoom in to the satellite photo above, you can see the archeologists' excavation trenches.

4.4.1 The Longjin Bridge and Former Kowloon City Pier were built in 1873 and the 1920s respectively. Longjin Bridge underwent four phases of modification. Details are described in the paragraphs below.

4.4.3 At the landward end of the Bridge, there was a two-storey pavilion. It was used to greet Chinese imperial officials. Locals named it as the “Pavilion for Greeting Officials”. Two stone tablets were erected inside the pavilion with inscriptions on them recording the 1873 and 1892 works of the Bridge. The pavilion was demolished during the reclamation of Kai Tak residential development between 1916 and 1920. The entrance stone tablet of the pavilion which reads as “Longjin” still remained at the Lok Sin Tong Primary School in Nam Kok Road, Kowloon City.

4.4.5 Phase 2 modification: Longjin Bridge was repaired by timber works and the works were completed in 1900.

4.4.7 Phase 4 modification: between 1916 and the early 1920s, the northern section of the Bridge was demolished during the site works associated with reclamation for the residential development in Kowloon City.

During construction of the Terminal Building basement, the decking of the buried northern section of the Bridge might be further disturbed.

The results of the excavations were documented at the 140th meeting of the Antiquities Advisory Board:

END_OF_DOCUMENT_TOKEN_TO_BE_REPLACED

I think the statement that

I think the statement that Kowloon City Pier(Luang Tsung) were built in 1873 is inaccurate. The "stone" bridge was built in 1873, but before the Chinese government converted it into stone bridge, it was wooden bridge. 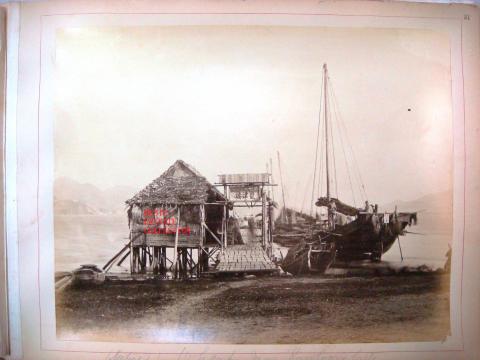 You are right, I didn't

You are right, I didn't notice that. The word "pobably" can be deleted.

Please do you have any links to more information about this?

Looking at the Conservation Management Plan for this old bridge (Dated November 2009. See 'Annex D' above), the executive summary includes:

4. A set of conservation guidelines, based on recognized charters and
principles, is proposed as a framework to guide the conservation,
management, maintenance and interpretation of the remnants in future. It is proposed that the remnants of original Lung Tsun Stone Bridge should be preserved in-situ. Moreover, no speculative recreation or excessive intervention would be allowed at the area buried with the original Bridge’s remnants.

Are the MTRC ignoring it?

This is the latest plan by the govt to Legco from last week:

Remnants of the Bridge and the former Kowloon City Pier have been discovered in the north apron of Kai Tak. Given its high historical significance, the remnants will be preserved in-situ as a special cultural heritage asset. This conservation approach was endorsed by the Antiquities Advisory Board in December 2009. A 2-stage public engagement (PE) exercise is being launched on conservation of the Bridge and its integration with KTD.

A huge amount of the bridge is intact.  A very impressive dig I must say, and puts even more romance into our old bits and bobs.

May I suggest that we deputize one of us to be the Gwulo representative to the Government to protect this bridge.  Adding our voice to many others is how heritage gets saved.

Of course, I volunteer David :)  to speak for me.  The approved form is to  email the relevant department, ask that we be included on anything they do (e.g. their proposed newsletter) that put us "in the loop" and they have a duty to keep us updated.  We say that we are Gwulo, a volunteer online history group - and we are keen to ...

well keen to do what exactly ?  Right now, we are keen to go spelunking online and in the woods to see what we find.  But when we find it, we post it, and then what ... ?

What say you gals and guys?

re: Gwulo representative on Stone Bridge

I hope gwulo.com encourages readers to share whatever we know about different sides of old hong kong. It could be something we've seen on a spelunking trip, online researches, personal experiences, family history, etc - it's all welcome.

Then make it as easy as possible to search through that information, and find other, related information that perhaps we weren't aware of.

Those are my goals for the website, and are enough to keep me busy :-)

I'm not planning to have the site act as a monitor, watching different government departments for potential damage to heritage sites. If there's an actual risk of damage, it deserves to be brought to people's attention, and gwulo.com is a good way to do that. But the watchdog role I'm happy to leave to groups that focus on it, eg The Conservancy Association.

What other watchdog groups are there out there?

The bridge, built in the 1870s, functioned as a pier for official use in the Qing dynasty (1644-1911). Officials were welcomed at a pavilion close to it and were escorted to the Kowloon Walled City to execute their duties.

The Civil Engineering and Development Department (CEDD) in collaboration with the Antiquities and Monuments Office and the Planning Department will organise two Community Envisioning Workshops to gather views from the public on the preservation of the Lung Tsun Stone Bridge whose remnants were unearthed in the Kai Tak development area.

Built in 1873, the 200-metre-long Lung Tsun Stone Bridge was once the landing pier linking to the access road to the Kowloon Walled City main gate.  At the landward end of the bridge was a two-storey pavilion, which was once used to greet Chinese imperial officials, thereby giving it the name, "Pavilion for Greeting Officials".  The bridge has since been modified or repaired many times as the area developed. It was completely buried in 1942 during the Japanese occupation in the Second World War.

The two Community Envisioning Workshops will be held at Lee Kau Yan Memorial School, 596 Prince Edward Road East, Kowloon, from 2pm to 5pm on June 19 and June 26. Site visits to the Lung Tsun Stone Bridge remnants will be arranged. Since the Lung Tsun Stone Bridge remnants are located within a work site, for safety reasons only participants aged 16 or above can join the site visit.

Members of the public can download the registration form from the website of the CEDD's Kai Tak Office (www.ktd.gov.hk). Completed forms should be returned seven days before each workshop either by fax or by mail (fax: 2369 4980; address: Kai Tak Office, CEDD, 7th Floor, Empire Centre, 68 Mody Road, Tsim Sha Tsui, Kowloon).  The quota for each workshop is 100 and will be allocated on a first-come-first-served basis. Enquiries can be made on 3106 3432.