END_OF_DOCUMENT_TOKEN_TO_BE_REPLACED

Thanks for that, I've added

Thanks for that, I've added in the date. Good to see you posting again,

A lot's changed, but some things still seem pretty similar

The Happy Valley, situated to the Eastward about half an hour's walk from the Clock Tower, was much favoured as a place of public resort as far back as 1845; the first driving road to run round the oval shaped centre being made about that time. Some few efforts were also attempted to bring the place into popularity for residential purposes, but the malaria rising from the cultivated ground, (then paddifields), distributes its death-fever so liberally that the idea had to be abandoned. _ During more recent years the place has been scientifically drained and improved in many ways, and thereby divested of most "of its poisonous atmosphere, so that to-day it forms the grandest Recreation-ground in this part of the world. It is no uncommon thing of an afternoon, when the sun has dipped behind Victoria peak, to see from two to three thousand spectators anxiously watching some exciting contest at Football or Cricket. And at the Annual Race Meeting, which is held every year in the month of February, the numbers collected" together will be ten times as great.

There is yet another interesting aspect in viewing this very beautiful spot. Many, very many,  who have in their day been participants and eye-witnesses of the season's innocent sports and pastimes extending over a period in some few cases of nearly half a century; have finally taken up their last resting place in sight of their life's playground. There are four cemeteries on the hillside to the right hand of the valley. Taking them in the order of approach, they are the Mahommedan, Roman Catholic, Angelican, Parsee, and Hindoo, all beautiful as regards their monuments and the peaceful calm which surrounds them.

Source: The Tourist's Guide to Hong Kong, with short trips to the Mainland of China (1897) by HURLEY, R. C.

Notes on Pony and Horse Racing in Hongkong

Penned by Sir Francis May, extracts on the "Notes on Pony and Horse Racing in Hongkong" can be read here in the Hong Kong Telegraph dated 10 January 1910. Long-winded at the beginning but covers the early days of horse racing.

Custodian of the Wongneichong Recreation Ground - 1894-1896

It's great to read the mention of the football and cricket matches at Happy Valley and the nearby cemeteries in the 1897 Tourist Guide. As per the Director of Public Works' Reports of the time, one of my ancestors (Charles A. Boreham) was Custodian of the Wongneichong Recreation Ground (which I believe is now the sports fields inside the race track) from 1894-1896. Charles lived in Queens Road East at the time and having married a Portugese lady, and adopted her faith, is buried alongside his wife in the Roman Catholic cemetery. Before the granstands were built the cemetery would have overlooked the sportsfields.

Anyone have any insight as to what the role of "Custodian" entailed - it appeared to be a paid posiiton, but the responsibilities are unclear. 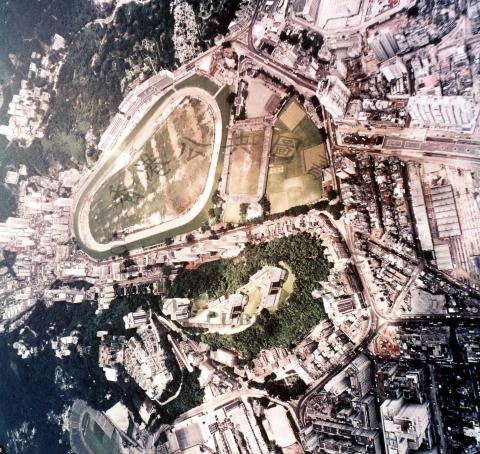