1927. A camp for soldiers is built here on the recently reclaimed land. (See PWD report for 1927, quoted in the comments below.)

1942-45. Used by the Japanese as a Prisoner of War camp to hold Allied soldiers.

Based on information from T and moddsey, and a 1949 map of the area, it  looked as though the Barracks covered the area outlined in blue above. At that time the northwest and southwest boundaries of this area were the limits of the reclamation, and so faced the sea.

1965. The '65 map still shows parts of this area marked "WD65", ie belonging to the War Department. But the exact boundaries are not clear.

1979-1981. In the '65 map, the block adjacent to and northeast of the Police Station is shown as War Department Land. Between 1979-81 it was used as a camp to house Vietnamese refugees.

Some points to note:

Can anyone fill in what the area was used for in the other years?

END_OF_DOCUMENT_TOKEN_TO_BE_REPLACED

After the Sham Shui Po Reclamation was completed the Military Authorites occupied a greater part of the site from 1927. Rows of single storey camp dwellings known as Hankow and Nanking Barracks were built. The military later acquired European type block of flats (Jubilee Buildings) on the foreshore for use as married quarters that overlooked the large parade grounds.

Sham Shui Po Barracks was bounded to the north by Fuk Wa St, to the east by Yen Chow St and to the west by Tonkin St. Camp St (northern entrance)  provides the only remaining clue (apart from the plaque in Sham Shui Po Park) that there once stood military barracks in the district. 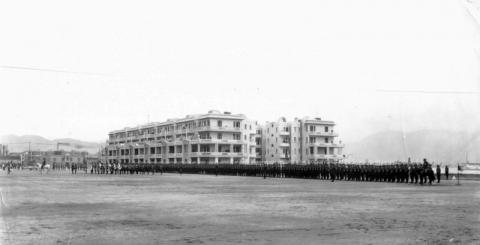 The first place I lived at in HK in 1946 was Sham Shui Po Police Station.  I remember little from that period however I went back many times in the next ten years.   My mother continued to buy food frpm the Comprador about 20 yds down Lai Chi Kok Rd and I was dressed by Sun Kee Tailors again close to the Comprador, all the years I was in HK. My mother used to take the family to chose cloth in the road behind, Tai Nan St which had a nullah running down the middle.  It was a centre for cloth stalls.  I looked for the nullah in 2007 and it has long gone.

I do remember that the camp straddled the road and I believe there was a gate, again across the road.

Hi Stephen:  Are you thinking of the nullah which ran along the middle of Nam Cheong Street?  I remember it too, with clothing shops sitting on top.   They placed wooden planks across the floor or customers would fall into the nullah.  It is probalby still there but under the roadway.  Tai Nam Street did not have a nullah but along the centre it also had clothing shops.  Across from the police station, there were, you will remember, many shops selling wickers or making wicker furniture.  It was also the destination of the Number 2 bus coming out of the Star Ferry terminal.

Permalink Submitted by David on Fri, 2009-01-30 13:28.
There is a description of the camp starting from pg 63 of "Long Night's Journey Into Day". There are several photos, and on pg 66 is a map confirming the general layout we have above.

According to the photo and the sketch in the preview it appeared the camp stretched a block or two towards Castle Peak Road.  I believe Fok Wah and/or Fok Wing Streets was the limit as there were pre-war shop houses along U Chau Street  then.  I remember I spotted and marked two such houses last year.

Photos and maps of Sham Shui Po District can be found at this link:

The memoirs of Valentine Frederick Loos Grevitt include the description of his arrival in Hong Kong in 1936:

After our fascinating initiation into the attractions of the eastern way of life we set sail on the final stage of our voyage to Hong Kong which we reached some time towards the end of April 1936. On our arrival those of us disembarking were wafted off to our various units. Ginger Lewis and I joined our Regiment at Hankow Barracks, Shamshuipo, Kowloon which was situated on the mainland known as the New Territories. Our barrack rooms were single story buildings, solidly built to withstand the perils of typhoons, spread over a wide area.

He goes on to describe life in Hong Kong at the time. The next section has an interesting description of his time in the International Settlement in Shanghai, when the Chinese and Japanese armies were still fighting for control of the city.

From the Northamption Museum Collection - 1927-1928 photos of Sham Shui Po Camp and motorised transport scenes of Faning can be viewed at:

With the exception of the Guard Houses and Food Stores which were built of brickwork, the huts were constructed on a wooden frame with Weatherboard sides, boarding and Malthoid roofs, and concrete ﬂoors.

The work also included the provision of all the necessary furniture and ﬁttings, 900 Electric light and fan points, two telephones, and the formation of tennis courts.

The drainage work comprised three large open storm water channels of a special design constructed through the Camp, with twelve wooden bridges erected across them.

Sullage channels, pipe drains and gullies were laid round the Huts, etc., and trapped connections made.

The arrival of large numbers of troops in the Colony made acceleration in the construction of the Camp of the greatest importance. The two principal Contracts for the erection of the Huts by The Hong Kong Excavation, Pile Driving and Construction Company, Ltd., and Messrs. Kin Lee & Co, were signed on the 1st and 2nd of March respectively, the plans having been prepared and tenders obtained in the course of about one week previous to the former date.

These Contracts were completed by the 17th and 7th of April respectively, and all the furniture and, ﬁttings were installed by the 26th idem, the whole of the Camp being thus equipped and ready for occupation in less than two months from the commencement of its construction.

The Regimental Institutes were erected and completed at somewhat later dates.

The PWD Report listed above should be for 1927 and not 1926 as newspaper reports in April 1927 confirm the hurried completion of the Camp.

Thanks for the correction. I

Thanks for the correction. I confirm the above information came from the PWD's annual report for 1927, and I've updated the completion date at the top of the page.