Position of marker is approximate.

This wasn't a building, but it's a good aid for dating photos so worth adding. The dates above show the years it was moored here, rather than the dates of its construction/demolition.

The floating dock belonged to the Admiralty and arrived in Hong Kong harbour on 9 December 1945. It was towed from Manus, Admiralty Islands to Hong Kong via Subic Bay by two tugs, Advantage and Cheerly. HMS Hart acted as the escort ship.

More information on the floating dock here and here

The floating dock is AFD18 (Admiralty Floating Dock 18), built Portsmouth 1941 for servicing destroyers and other smaller vessels. After war service in Corpach and Oran, in 1945 she was towed via Malta, Aden and Cochin to Darwin, Australia (epic story) and then on to Manus in PNG via Milne Bay. She was in Manus August-Nov 1945 before being towed to HK, arriving in December and staying until June 1955, when she was moved to S'pore, being transferred to the S'pore Govt in 1968 after the Brits moved out and being broken up in 1978. So her presence on moorings (clearly marked on the central harbour charts as of the 1948 new edition) just ENE of the eastern end of the Naval Dockyard north wall is a sure diagnostic of a photo 12.1946-6.1955.

END_OF_DOCUMENT_TOKEN_TO_BE_REPLACED 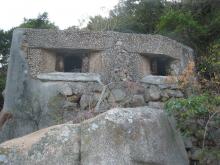