This stood at the southern end of Pedder Street, where it joins Queen's Road. Wikipedia says:

It chimed for the first time at midnight on 31 December 1862.

The 80 feet (24 m) tall clock tower with a lighted dial, designed by a Mr. Rawlings, was to be funded by subscriptions, but the lack of public response meant that many of the more elaborate decorative features were jettisoned. In the end, a donation was secured from Scotsman Douglas Lapraik, one of the most successful Tai-pans who founded the Hong Kong and Whampoa Dock Company, precursor of Hutchison Whampoa.

Elsewhere in Wikipedia there is an entry describing the clock tower at the KCRC terminus in TST. It says that the clock from the demolished Pedder Street Clock Tower was used in the new clock tower at the KCRC terminus. However, elsewhere I've seen mention that the Pedder Streer Clock Tower was unreliable, so it seems oddd they'd reuse it. Maybe they just re-used the hands and clock face, but not the mechanism?

END_OF_DOCUMENT_TOKEN_TO_BE_REPLACED

Reading the legco minutes from that era, there were remarkably detailed and impassioned debates on the fate of the central clock tower, which was apparently still in existence by Feb 1911, contrary to the wikipedia entry. Condensing the debate it seems there was a plan to move the clock to the Post Office building then under construction:

HON. MR. KESWICK―Yes. I submit, Sir, that averse as I am, more averse probably than many members here, to the removal of ancient landmarks and monuments, the time has come when that old clock tower is better out of the way, and taking that in conjunction with this proposal to put a clock on the new Post Office―and I think the two must be taken together―it appears to me that it is essential that this Colony should have some timepiece to set the time for us.

"As most of you know, a gun is fired with a certain amount of accuracy every day at twelve o'clock, but this is merely the old custom of a private firm, and we have nothing whatever except the falling of the time-ball to show the people of the Colony how to regulate their affairs, to be punctual, and conduct their business generally with regard to time."A year later the same question is asked:

Although it appears they built a tower on the post office for the clock - it seems that the clock instead ended up on the tower in kowloon railway station. Even that was controversial; Pollock asks Chatham, head of the public works department, in october 1917 why there is still no clock in the tower. Chatham replies:

"With regard to the clock on the railway station at Kowloon, this formed the subject, two or three years ago, of a recommendation by the Public Works Committee that economy should be effected by omitting the clock. Since then no further steps have been taken that I am aware of in connection with the matter."

"The clock for the railway tower is on order and I hope it will come out when the war restrictions allow. The metal in it weighs over a ton, which brings it within the class of goods which cannot be released at present."

The clock faces on the two towers appear identical in photos. Incidentally Pollock has a path named after him on the peak, Chatham the road in Tsim Sha Tsui.

sorry that was a bit garbled - the last quote, about the clock being in order - was a year later in 1918

It is interesting to note that war restrictions of the day delayed the installation of the clocks.

80skid, thanks for digging in to this. So it seems true that the clock face was re-used from the Pedder St clock, but a new mechanism was installed.

Did you see any mention of whether all faces of the new clock came from Pedder St? Wikipedia again: 'The Clock Tower reused the clock from the demolished Pedder Street Clock Tower. However, only one side had a clock, and it was not until 1920 that the remaining three sides of the Clock Tower were installed.'

Been looking through the KCR archives. No mention is made of the use of the Pedder Street Clock or operation of a clock on only one side of the KCR Clocktower.

The TST KCR Station (including the clocktower) was opened to the public on 28 March 1916. The electric turret clock had been on order since the beginning of WW1. The clock arrived in late 1920 and together with a one ton bell was installed on 22 March 1921. This appears to differ from the entry in Wikipedia.

A lot of things on wiki need to be taken with a pinch of salt. Looking at close up photos of the central clock tower - the clock face does appear identical to that on the kcr tower. Given the first was built in 1863 and the other installed in 1921, it'd be surprising that they would look the same unless by deliberate design.
compare this photo
http://hkclweb.hkpl.gov.hk/hkclr2/object?svc=objrtv&src=CM&itemid=CG9H5K2TR@QQLOO9&pid=1&mime=image/jpeg

with the one on wiki.

incidentally, this shot taken in 1914 shows a marvellous close up of the railway station under construction, with clock face incomplete. I like the complementary round window:

Thanks for the extra photos. I see the clock faces have very similar numerals around the outside, but the centre of each one is different. The centre of the Pedder St clock face has a 4-point cross pattern, where the face of railway terminus clock has an 8-point 'flower' pattern.

If the Pedder St clock was actually re-used in the railway terminus, it looks as though only parts of it were.

From the 1913 Government Annual Report

The Pedder Street Clocktower was considered at the time that it formed 'a serious obstruction to traffic'. Work on its demolition began in May 1913 and completed three months later in August. The Clock. being of no further service was sold at Public Auction. realising $662.50

I think the above puts to rest the notion that parts of the Clock were retained for use in the installation of the KCR Clock in 1921. Mention is not made of the buyer of the Clock. 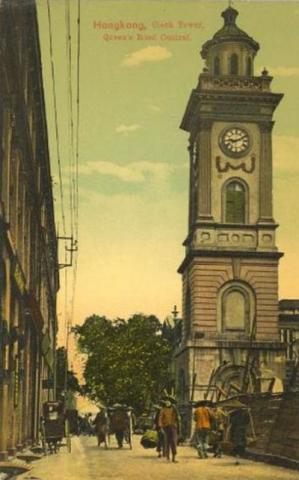 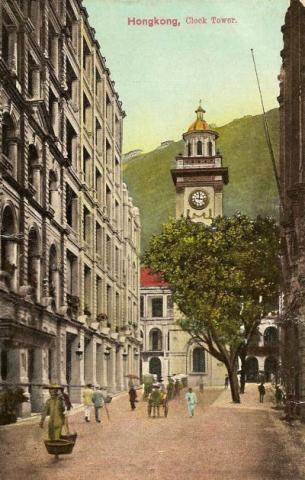 The KCR Clock commenced operations at 3 p.m. on 21 March 1921 and was supplied by Messrs Gent & Co Ltd, the famous makers of the clock of the Royal Liver Buildings. Liverpool - the largest electric clock in the world.

The 4 dials are 8 ft in diameter. The clock was connected in series with the existing system and synchronised with clocks on concourses and offices.

All the clocks, including the turret clock, were controlled by a master clock which in turn was automatically regulated by hourly signals from the Royal Observatory.

Thanks Moddsey, great photos as always, and glad to have the story about the clock cleared up. 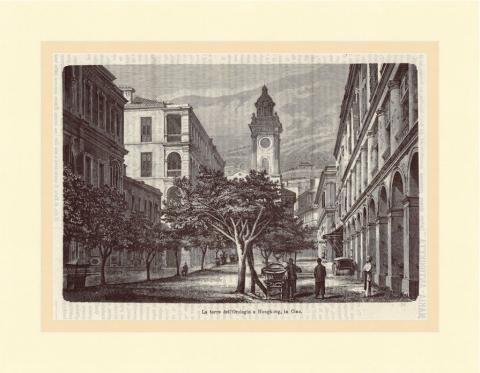 A new fire-alarm bell was added to the Clock Tower in July 1880.

NB: The signal method included with the above announcement had been in place since April 1871. Several fire bells were located around town at that time, including Central Police Station and the Harbourmaster's office at West Point.

The Clock Tower, a square

The Clock Tower, a square granite structure about 80 feet high, situated in the centre of the City of Victoria at the Queen'sRoad end of Pedder's Street, between the Hong Kong Hotel and the General Post Office,was erected by public subscription about the year 1860.It supports a well regulated clock and a fire-bell, and may be considered as the best land-mark in the Colony.

References to the old Clock Tower, which stood at the top of Pedder Street, near the junction with Queen's Road have been made in this series from time to time - including a brief note on the fact that there had been for many years a steady agitation to have it removed. Erected in 1862 it was eventually demolished in 1913, The late Mr. M. J. D. Stephens - it may not be generally known - was one of the staunchest advocates of its removal.

March 26th 1884.  The Humble. Memorial, of the undersigned inhabitants of the Colony of Hongkong sheweth:-

1. The Clock Tower in the Queen’s Road at the top of Pedder’s Hill is inconveniently situated, being-an obstruction to traffic.

2. It is built upon and over the line of foot pavement leading from the corner of the Hongkong Hotel to the corner of the foot pavement fronting the Post Office ( which was then on the China Building site) and the line of foot passenger traffic on that side of the Queen’s Road is in consequence forced into the carriage road and passenger traffic thereby becomes greatly impeded and often times dangerous by passing chairs and vehicular traffic.

3. In passing from the Queen's Road to the Praya down Pedder’s Hill or Street Clock Tower is a great obstruction as it takes up the greater portion of the roadway leaving but a comparatively small opening on by such other suitable structure as your Excellency may be advised to place there

Perhaps with the promise of something being done the agitation was more or less stifled for nearly fourteen years. It was not until 1912 that definite orders were given for the demolition of the Clock Tower; and the last of its brickwork was carried away by the summer of 1913. 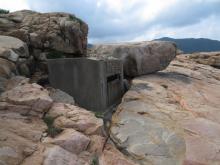