END_OF_DOCUMENT_TOKEN_TO_BE_REPLACED

The dry dock was closed and filled with solid material when Harcourt Road was constructed. This backfill was done mid to end 1960.

Thanks Klaus. I'll set the

Thanks Klaus. I'll also set the completion date to 1907 when water first filled the dry dock, though the article below says it would be another year or two before the dry dock could be used. The article is from page 3 of the Hong Kong Daily Press, 1907-06-17. (Some of the numbers were difficult to read, so I may not have typed them correctly.)

On Saturday afternoon the new Admiralty Dock, which has been in course of construction by Messrs. Punchard, Lowther and Co. for the last three years received its baptism. The sluice gates were opened about 1.30 p.m., and the water was allowed to run in slowly, so slowly that it will be several days before the dock is filled and the large caisson is floated into its groove. The dock thus opened is one of the greatest engineering achievements in the Far East. The cofferdam which bars the entrance has still to be removed, a work which will occupy another six months and the permanent pumping machinery remains to be installed. The dock is 559 feet long at the bottom, has an entrance of 95 feet, is 70 feet wide on the floor and 120 feet at the top with a depth of water on sill below very low springs of 30 feet. It is constructed with cement concrete faced with granite, and the floor consists of 14 feet of combined concrete and masonry, while the side walls are 37 fee thick at the bottom, gradually diminishing to ?? feet at low water level. The centre of the dock is about 3?0 feet from the western boundary of Murray Road while the distance from the dock's centre to the Western wall on the tidal basin is 308 feet. Unlike other docks here the new structure has all sorts of stairways and tunnels alongside which give easy access to the various portions. Certainly the dock, with its solid masonry looked very fine. The largest battleship built can be admitted at the lowest state of the tide, though it is reported that the dock will not be used for two years yet. The tidal basin, which is already completed, has a water surface of 9 1/?  acres, a uniform depth at low water of 32 feet, and at one time will accommodate ? battleship and several other large vessels undergoing repairs or refit. The wall of the tidal basin is built of concrete and dressed granite, while from a minimum depth of 40 feet to low water level the walls are of concrete blocks from five to seven tons weight, the superstructure being of massed concrete faced with granite. The total estimated cost of the Naval Yard Extension works was over £1,200,000. It will be remembered that the great initial difficulty lay in finding a foundation and after a considerable sum had been spent in this work it was decided to pile the foundation. For this purpose Borneo pine was utilised. Naturally these difficulties added enormously to the cost, which has naturally exceeded the original estimate. The concrete blocks used in the construction work are from the quarry at Mataukok, at which works over 2,000 blocks were turned out monthly. Over 280,000 feet of dressed stone was used in the dock, while the sea walls required more than 60,000 cubic feet. Notwithstanding that the construction work is almost completed, some time must elapse before the permanent pumping machinery and plant necessary to undertake the repairs of ships is installed. In the afternoon Messrs. Punchard, Lowther and Co.'s staff, together with a number of visitors, drank success to the new dock, and Messrs. Punchard, Lowther and Co., the contractors. 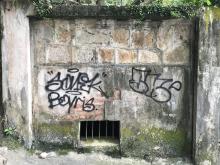