The following notes are courtesy of Liz Chater:

It was unveiled 24 May 1923 in a double unveiling of the day by Sir R.E. Stubbs.  The Centotaph was the other to be unveiled that day.

Earlier in the month, on the 3rd May the Sir Henry May statue was unveiled.  Sir Paul Chater paid a wonderful tribute at the unveiling of Sir Henry, (they were VERY close friends) and it appears that once the public subscription had closed (quite substantially less than was required to pay for a statue) he ensured that it was generously topped up and effectively paid for the statue himself.

At the shareholders meeting in February 1916 it was proposed and agreed that a monument should be erected in memory of the Bank staff who lost their lives in the war. Placed in the Hongkong & Shanghai Bank’s garden, next to Queen’s Building and facing the Praya, the memorial was erected by the Bank to perpetuate the memory of those members of staff who fell in the war.   The memorial takes the form of a striking female figure of “fame” standing 8ft high and holding in her hand a wreath.  In front of the figure is a smaller statue, that of a soldier with his kit and rifle.   The figure or “fame” stands on a pedestal of polished Peterhead granite on the front of which is a square bronze panel with the inscription:

“1914-1918. In memory of the men of the Hongkong and Shanghai Bank whose lives were given for their Country in the Great War”.  Underneath the plaque engraved in the granite are the following words “They shall not grow old as we that are alive grow old.  Age shall not weary them nor the years condemn.  At the going down of the sun and in the morning we shall remember them.” On each side of the pedestal there are longer panels upon which the names of the men who fell are inscribed.   The whole rests upon a lower base of local granite and flanked on either hand by two pillars.  There are two smaller pillars on each side of the memorial and these will have grafted on them bronze lamp standards.

In all, 42 people lost their lives and their names were engraved on the monument.  The memorial, erected on the Connaught Road side overlooking the harbour consisted of a figure of Fame in bronze on a granite pedestal and formed a graceful tribute to the many members of the staff who made the supreme sacrifice.   Nearly all the Bank staff were present together with many naval and military officers and a large number of prominent residents.

It is a memorial that is rarely, if ever, mentioned when Statue Square is being described and it is rare indeed to find a picture of it.

END_OF_DOCUMENT_TOKEN_TO_BE_REPLACED 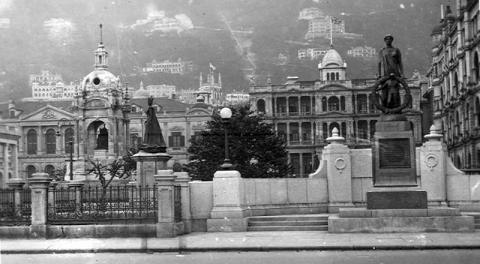 you can clearly see the empty plinths here from June 1948. Was the identical plinth on the other side of Statue Square the site of May's statue?

Yes it was. Statue of Sir Henry May 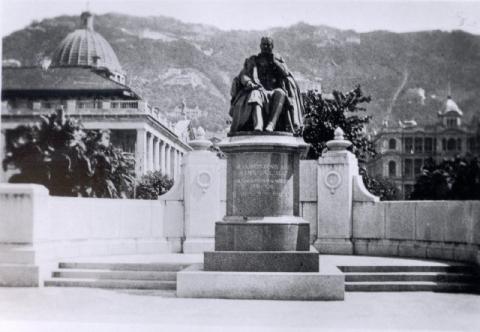