The completion date is a guess, taken from this photo - corrections welcome!

The demolition is confirmed to be 1960, see the comments below.

END_OF_DOCUMENT_TOKEN_TO_BE_REPLACED

Thanks for the following notes.

I've got postcards thet show the tower and the chartered bank,
so that's after 1959,
but by the time they started the City Hall building, it's gone.
I think that the City Hall was completed in 1961,

On 28 November 1957, it was announced that a sizable portion of the naval dockyard would be closed.

In 1959, the Hong Kong Govt paid the War Department $24 million for the former dockyard area but the area was not handed over until 1962.

Harcourt Road linking Connaught Road with Gloucester Road was subsequemtly built. The construction of Harcourt Road may have coincided with the demolition of the chimney in the early 1960s. 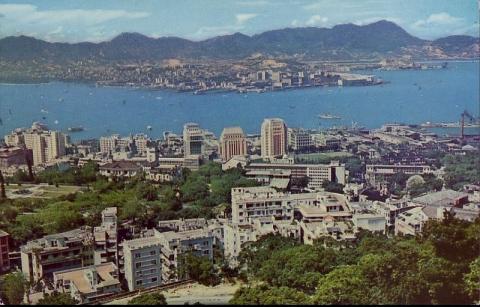 Definitely been cleared by January 1961 as this hi-res photo makes clear - if date given is accurate. from a US naval visit (USS Bennington) so probably are.

The chimney was part of the

The chimney was part of the dockyard power station

I'm going to up the ante and show you this picture from the 1965 French film "Les Tribulations d'un Chinois en Chine". Is that the Naval dockyard chimney in the background?  If so, then you need to set the demolition date a bit later. The film was released in 1965 but I'mnot sure when it was shot - possibly 1964 or 1965. 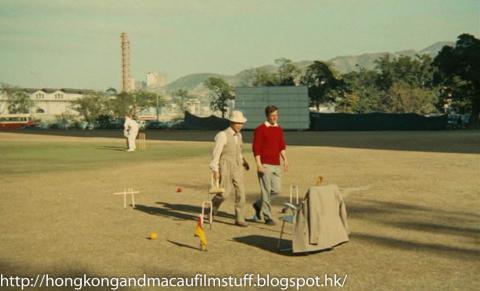 I think it is a different chimney to the original. For whatever reason they temporarily re-erected a chimney near to the original for a few years, perhaps to burn waste as they demolished the rest of the barracks

This 1963 Picture - no chimney of any sort. The aerial photos from February of that year also show no chimney.

This 1965 Picture a chimney exists once again.

I have multiple other photos that confirm no chimney after 1960 with another appearing the middle of the 1960s. It cant have lasted more than a couple of years at that site became the junction of Harcourt Road and Cotton Tree Drive

I've made a page for it at http://gwulo.com/node/35443, so we can carry on the conversation about the later chimney over there.

Confirmation of the Demolition 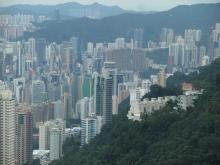 Looking north-east from the Peak Tower (2014)