I knew of this website through the book "Lost in the Battle for Hong Kong" by Bob Tatz. I was born in Hong Kong and received my university education at Saint Mary's University in Halifax, Nova Scotia, Canada. Through the Consulate General of Canada in Hong Kong and Macao, I was notified of the book launch. And it is on Page 23 of that book that I saw the website "gwulo.com" and hopefully I will be able to discover my childhood more through the old photos contained herein.

Besides, I have some black-and-white photos left over by my parents who had already passed away in the last century. They were mostly taken between the late 1950s and the early 1970s after which the photos were no longer in black and white. Next year, I will become a senior citizen (statuarily) and I intend to scan them into digital images and share them with those who are interested in the history of Hong Kong.

When I was a small child, my father was working for Eastern Shipping Company as an accountant. I don't know whether that company had any affiliation with the Swire Group or Jardine, but there were quite a few expats (mostly British, I believe) working in that company. Other than shipping business, I think that company was also engaged in mining business, as my father had once travelled to a tin mine in Malaya (now Malaysia) on a business trip. I believe the company no longer existed since the late 1970s, for my father switched to another company. Hopefully, if there are still survivors of that company, I will be able to know more precisely what had eventually happened to that company.

Posts & comments by this user

Shows posts that this user has created and / or commented on.
END_OF_DOCUMENT_TOKEN_TO_BE_REPLACED 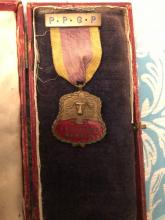