Unfortunately I did not note this building's name at the time, but it was demolished soon after to become the inevitable high-rise complex.

Wasn't this the housing for

Wasn't this the housing for the RAF personnel  near the end of Ho Man Tin Hill Road up on the hill before this area was built up by the high rises?

No, it was ths one nearly

No, it was ths one nearly opposite, but below

last of the mansions in Homantin Hill

Hi IDJ - Thanks for responding. Maybe I'm wrong again, can this be the Cherry Hill Lodge?  As a kid around 1960, I used to go up the hill with my Portuguese friends who lived on Homantin Street. We would play up on the hill by the alleyway behind the two or three story housing buildings or by the steps through a heavily wooded climb at the first hairpin bend where Homantin Street changes into Homantin Hill Road. Up on the hill with the railroad below, looking across, I would see Wah Yun College on the right and more towards the left, Kings Park. If I turn around 180 degrees, I would see the shanty shacks on another hill top. That area I believe was Homantin.  My memories could have faded - that was 60 years ago!

That name seems to be familiar.

A friend who could confirm it and lived in the neighbouring building seen in the photograph has recently left HK permanently and is not contactable at the moment.

From my time there from the early 1970s onwards, there were a number of alternative short-cut paths up the slopes rather than using the pavements up the steep road with its two acute bends which was hard work going upwards in the summer’s heat.

A path I often used was accessed by an anonymous passage which went behind the buildings in Homantin Street and then rose up on an unmade path and steep earth cut steps to come out nearly opposite the military apartments compound. Not many people seemed to be aware of it.

The more popular path left the first bend at the end of Homantin Street and came out higher up on Homantin Hill Road between the Government staff quarters block and the Dahfuldy apartments complex. Opposite which, across the road was another set of steps down to the petrol stations in Princess Margaret Road or Nairn Road as it used to be known.

The shanty shacks you would have seen were on the barren hills on the opposite side of what is now Princess Margaret Road and is now known as Homantin although many still assumed the area around Waterloo Road /Homantin Street is 'Homantin.'

Perception of a 'Districts' locations/boundaries change over the years.

It was used as Hong Kong Baptist Theological Seminary in 1958 and moved to Sai Kung in 1999.

the high rise on the left is still there. It's called "Dawn Garden" at #4 Ho Man Tin Hill Road. So the old house would have been replaced by "Mountain Court". Given HK's penchant for often remembering older structures in the names of their replacements, perhaps the old mansion had "Mountain" in the name?

Thanks for the tips on the location. I've made Places for #4 and #5. 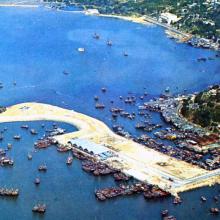 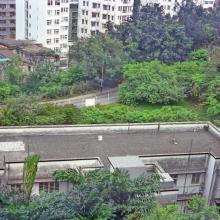