A view over Sai Ying Pun, and the western harbour towards Stonecutters Island. The photo is showing its age, but as this view wasn't photographed as often as Central and Sheung Wan, it's stilll worth showing.

It's from the same set as the photo of Union Church, and has the same person's handwriting on the back. On this photo it says:

"Hong Kong + Harbor from the mountain"

The spelling of 'harbor' suggests an American author. I guess it was taken from somewhere up the Peak. Today we'd think of Lugard Road as the likely spot, but that wasn't built yet when this photo was taken. So maybe it was taken from the very top of the Peak, as that lines up with the streets shown in the photo.

There are three long, parallel streets that are shown clearly in the photo. They run from the foreground downhill to the seafront. From left to right they are Western, Centre, and Eastern streets. Streets in Hong Kong often meet at all sorts of odd angles, so these are unusual in forming part of a large rectangular grid. The 'cross' streets of the grid shown in this photo are Connaught Road on the seafront, then moving back from the sea we have Des Voeux Road, Queen's Road, 1st, 2nd, 3rd, and High Streets.

In the foreground we catch glimpses of Bonham Road and Park Road. Neither of them look very heavily developed at this time.

Just to note that we have a huddle of lorchas and junks inshore, then steamships (all with awnings spread) further out and towards Stonecutters are a four masted and a three masted barque. 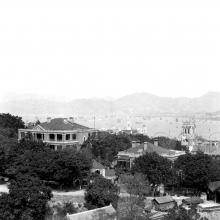 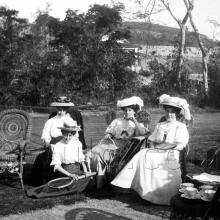 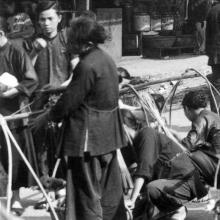