Here's a view over Garden Road, taken around 1900.

The pitched roofs in the bottom right corner are the old terminus building for the Peak Tram. A tram was in the station when this photo was taken.

Behind the terminus are some large trees, and behind that appears to be the roof of a temporary matshed structure.

Next is St John's Cathedral, and in the distance on the right is the Hong Kong Club Building, completed in 1897.

Garden Road runs across the picture, running uphill from the terminus building. You can see there wasn't much traffic in those days, with several groups of people standing or squatting on the road.

Just across the road are two buildings, a smaller building on the right, and a grander one on the left. Does anyone know what they were?

Finally, in the distance are the white turrets of Queen's Building, opened in 1899.

This came from the same group as the photo of Union Church, but the handwriting on the back of the photo is a different style and a different language, so I'm not sure if they belonged to the same owner originally. Can anyone recognise the language, and let us know what it says? 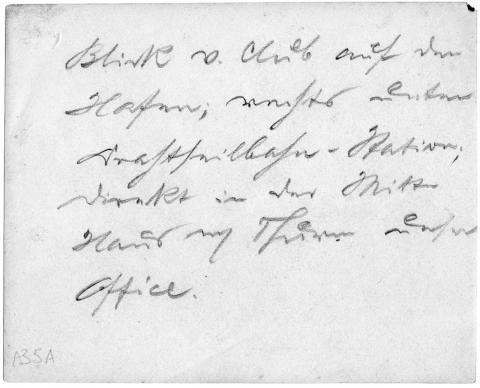 the perspective makes it hard to tell but I'm guessing the buildings were either the precursors to the east wing of central government offices or they're on the site of the current US consulate. This photo shows the same buildings. from same year 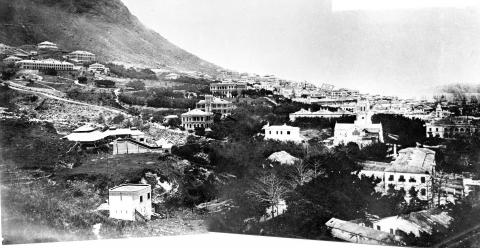 Now the US Consulate.  I've recently added a "place" with this title, and asked on the 1870 photo be linked.

Zoom in on Garden Rd and you

Zoom in on Garden Rd and you can see that it was a 10 ft drop down toward the Albany Nullah - and no railings.    Much later, the Helena May filled up that space.  That drop-off is still there today if you walk downhill from the Helena May, you can "feel" it.

By the way, the flower shop there, run by Mrs. Lee, has been there since this photo was taken.  Ask her about it next time you drop by to buy flowers.

Compare the two photos, and you can see the original little saplings, and the mighty trees they became.

"That drop-off is still there

"That drop-off is still there today if you walk downhill from the Helena May, you can "feel" it."

Could you please explain this? How do you feel the drop-off? I remember the road down from the Helena May being very steep but not sure what you mean by the drop-off still being there.

First, look at the photo at

First, look at the photo at get the feel of the drop-off in your mind.

Next, walk downhill from the Helena May, and before the first on-ramp to Cotton Tree drive, there are a set of stairs.   Close your eyes, try and imagine Cotton Tree drive is not there.  The "feeling" I have is disquiet, not just from the fast cars, but also from the change from a nice sturdy builidng, to a very steep drop off.

The HKVDC HQ building stood just uphill from the cathedral, on the corner of Garden & Lower Albert roads. It was re-built during 1905-6, and during that time:

"the orderly-room, stores &c., [were] temporarily housed in a matshed"

I wonder if that's the matshed we can see in this photo?

I can see 'Club' in the first line of the handwriting, and we think it was written in German, so maybe this was taken from the Club Germania up on Kennedy Road?

handwriting on the back

The handwriting on the back is the old German style. It is called "Kurrentschrift", in 1911 modified and today commonly known as "Sütterlin". (In 1941 Suetterlin was banned by the Nazis.) The text on the back says: "View from the Club towards the harbour; to the right below Cable Car Station; direct in the middle House next to tower our office".

Thank you.  I tend to look at

Thank you.  I tend to look at the buildings, and not the view the buildings had.  Now we know the lovely view from the Club Germania.

'next to tower our office'

Yes, thanks for the translation. Just to the right of the cathedral's tower we can see the roof of what would become the French Mission Building. I guess that's where the original owner of the photo worked.

This font is Kurrent, later replaced by Suetterlin.

View from the Club on the harbor; right rear cable car station; right in the middle house with tower our office.

This house with the tower is weak visible in the background, down by the harbor.

I hope this will be useful.

“Zoom in on Garden Rd and you can see that it was a 10 ft drop down toward the Albany Nullah - and no railings.”

I found this description which highlighted this very feature:

“The hill road leading up from Queen’s Road to the C.S.O. and St. John’s Cathedral is sadly in want of a railing, as a protection against accidents, along the outer side. This was brought to my mind by being brought within an ace of witnessing a bad accident there the other morning. A gentleman followed by some dogs was coming down the slope towards Queen’s Road when he was overtaken by two chairs in which some ladies were being carried, and in some way, in stepping aside to make room for the chair coolies to pass, and at the same time turning to look after his dogs, he stepped over the edge and barely saved himself, by digging his stick into the ground, from what might have been a very serious accident. The danger is ten-fold at night.” 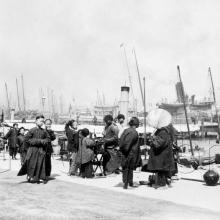 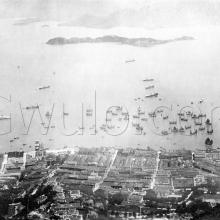 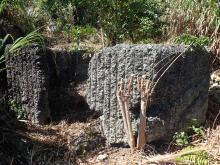