What are we looking at in the foreground of this photo?

I think the location is on the newly formed seafront, after the Central reclamation in the 1960s. Then just to the right of the photo the second Blake Pier stretched out to sea.

But what was this stretch of pier used for? There's some sort of large, metal frame at the back of each bay in the pier - does that give any clue?

The background is easier to identify. From left to right:

It's interesting to see the different generations of buildings. Take a look at this 1950s photo: 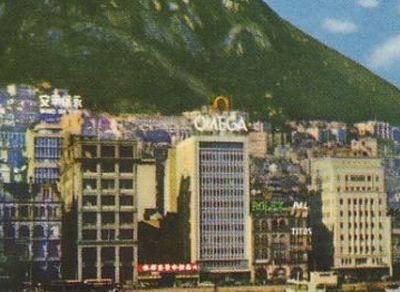 The building to the right of the GPO was built in the 1920s. It was an earlier generation of P&O building, and was one of the tallest buildings on the seafront.

In the 1950s photo it was still almost as tall as the building with the Omega sign. Look at the difference in the number of floors though - eight in the old building, but eleven or twelve in the new one. No high, airy ceilings in the new buildings!

The 'Omega sign' building is still visible in the 1960s photo, but by then it's the shorty, with surrounding buildings five or more storeys higher.

In today's photo it has been replaced by Fung House, taller again.

Can anyone tell us what's caused the increases in height over the different generations of buildings? Government regulations? Building technology? Something else completely?

That pier was actually Postal.   It was the new pier for the then Old GPO.  The metal frames were actually a conveyer system for mail bags.

If you get some of the older photos of Connaught Road with the Old GPO in it, you should be able to see a covered fly over connecting the GPO across the road.  Before the reclaimation, that went to the old pier.  I have forgotten how these got into the old GPO though.   But when the present day GPO was built, it was integrated with the pier.  I think there are still some infrastructure of the pier left today.  I also have a faint imporession that the pier was still in use in the late 1980's.

What are we looking at in the foreground of this photo?

I think it is referred to as a boat.

hehe. Actually, if you are going to be pedantic, the correct term is water

That makes sense, thanks for the info.

I remember if I came off a Star Ferry in Central and was heading towards Exchange Square I rcould go up a staircase and along a flat concrete area. Was I walking on the roof we can see here?

There were always a couple of old men living there. One had an assortment of figures on display, that looked like they were made from old coat hangars.

Thanks also to Guy and Peter for this information about building heights:

Height limit restrictions were imposed by the Planning Department and varied over the years. This was also linked to the plot ratio of the site and the imposition of the 72 degrees shadow line that was abolished sometime in the mid-80's. This is why old buildings slope backwards at the top. A line drawn at 72 degrees from the middle of the road on the major face of a building had to cut back where the shadow line bisected the building. The idea was to avoid the canyon effect that we have today.

Whereas Tsimshatsui had a fixed height limit due to the old airport, the New Territories had no height limit and Hong Kong Island's height limit was changed over the years, mainly due to advances in geotechnical engineering.

That '72-degrees' rule is interesting. It certainly explains some of the unusual sloping designs around Sheung Wan.

I remember if I came off a Star Ferry in Central and was heading towards Exchange Square I rcould go up a staircase and along a flat concrete area. Was I walking on the roof we can see here?

Yes, that's what's remain of the pier. There was a time after the pier ceased to function, you may walk both on ground level as well as the covered roof until they finally blocked up the ground level access. In the photo, if you zoom in, you should be able to see the conveyor system had been lowered into the hold of the boat for loading or unloading. The other one on the empty slot was not. The Postal ferries were painted in Beige & Mud. They used to have a fleet of them running between GPO and Canton Road government dockyard (has to get confirmation on this) and later, to and from the International mail processing centre next to the Hung Hom Terminus.

In 1972, the GPO bridge was extended to the temporary post office buildings in the new Central reclamation after the completion of the widening of Connaught Road Central.

a fascinating photo of the special dock that was built for the GPO for the mail boats (you can see one in the dock) to pick up the mail to take out to the mail steamers (or, by 1966, to take the bags across to Kai Tak) for onward transport to wherever.  When they built the new GPO (after the barbarians had torn down the previous beauty), they designed it to fit around and over the dock which was still there (and I think in use) in the 1980s. 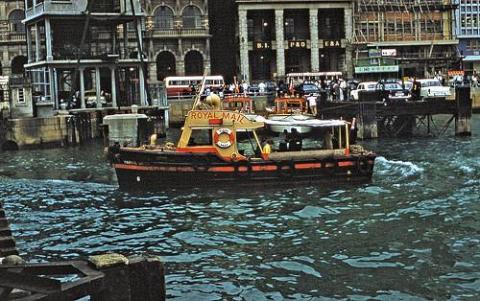 Looking at this map here , the building with the "Omega" sign appears to be the first generation Fung House. 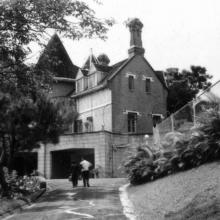 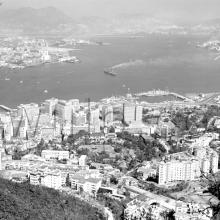 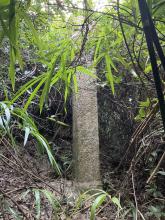