What do you see in this photo?

If you zoom in to the lamp-post, at about the same height as the young boy to its left you'll see a small round container fastened to the post. It is labelled 'No 109', and is a prime example of a government-issue rat bin.

The idea was that anyone who found a dead rat in the area should drop it into the bin. Twice a day, a government rat collector would visit the bin and take away the little rat corpses.

Why the interest in dead rats? The rat collectors would take them...

"... to the Government Bacteriologist. Each rat is labelled with the number of the bin from which it is taken, and if found to be plague infected, a special survey is at once made of the block of houses in the immediate vicinity of such bin..." [1]

That quote comes from a document dated 1913, when Hong Kong's plague epidemics in the 1890s and early 1900s were recent history. I believe that rat bins still used into the 1950s. Do any of our older readers remember seeing them?

Who: The trays of goods for sale likely belong to the man standing behind them. He's got quite an array of little vases and trinkets. I wonder if he was aiming at the local market or the visiting tourist?

Behind him there's a boy with his back to us, engrossed in his book. Is the book stall selling books, and he's waiting for a customer? Or was it like one of those post-war stalls where you paid to read the comic books, and read them right there and then?

When: It's from the same collection as the photo of Altadena, dated to the mid / late 1930s.

Where: Somewhere you could set up your wares in the street, so probably a pedestrian lane around Central. Cat Street maybe?

I'm always interested to see what you'll find in these photos. For instance I thought last week's photo was about the Taikoo docks & sugar factory. And we did get some very interesting comments about them, but we also heard about the ship in the photo that was a wartime oil tanker, and how two streets in North Point got their name.

So how about this week's photo, what do you see?

As far as I could recall some of the Rat Bins were still on selected poles even in the early 1970's, especially in older districts.

The banner in front of the bookstore of the top right says 'buy Chinese Western books'.  It sounds like the second half of a sentence, so there must be more than just plain old sale of books going on.

I suspect this place used to sell, rent and trade books, in whatever language.  According to my grandma, she regularly rented books in the 1930s, and when the going got tough, she sold the family collection of books in such stalls .

I remember these bins there used to be one behind by place on Chatham Road, and I remember seeing a man put a rat into the bin so my friend and I had a loook inside. The rat was in a yellow liquid with a smell not too different to Detol but quite a bit stronger. At least this is what I can recall. I know I never looked into another one since. This would be about 1961 or 62.

Thanks for the extra information. So they were definitely still in use into the 1960s. T, any idea if there were just the disused old bins left in the 1970s, or were they still being used as well?

Breskvar, sounds almost like a Pawn Shop arrangement, where you bought books in the good times, then sold them back when money was tight.

The location is likely

From this photo, there is no adjacent structure (shop) to its left (it was a back alley at that time), the depth of the shop, the nature of business and the lamp pole, all these matches my memory of the vicinity.

the guessed location is marked in attached map

There used to be a rat bin

Unfortunately my attention in the 1970's was not being focused on such things so I could not recall much.  I guess they are difficult to come by these days as most of the old lamp post had been replaced in the past two decades or so.

There was a rat bin on a lamp

There was a rat bin on a lamp pole on Leighton Road outside St Paul's School  in the late '60's. Never tempted to look in though!

Thanks for the extra info about the book stall sign, and the rat bins - don't think I'd have looked inside either!

Thanks for the map too - I didn't think we'd be able to get that close to the location, so that's a bonus. One possibility for matching the old location is to go and see if the lamp post in the photo is still there. Obviously it'll be a newer version (without rat bin!), but we have seen other present-day lamp posts in the same location as they were in old photos.

And thanks to KK Chan for pinpointing the end of the Rat Bin in Hong Kong:

Refer to the 3rd NOV 1975 WAH KIU YAT PAO, “according to the expert opinon, the Urban Council decided to phase out all the  rat bins gradually 〔depends on the usage in different districts〕and will be finished  by 1978”

When I was a kid in the 70s, people often laughed at a tall guy and short girl couple by saying 電燈柱掛老鼠箱(rat bin hanging on a lamp post), very seldom I hear people using this phase nowadays.

Permalink Submitted by Bails on Thu, 2011-12-22 08:15.
I immediately thought Cat St when I saw the photo. I vividly remember seeing rat bins, Queen's Road East and many other areas. Walking with my Amah, I recall seeing a long fat tail sticking out of one and asking Ah Dong what it was! I became fascinated by them, as a small boy might! I do remember being soundly scolded by Ah Dong, when I reached to open one for a peek inside! I am not at all aware of approximately when they were phased out.

電燈柱掛老鼠箱 (rat bin hanging on a lamp post) was still in use in the late 90s.  I'm 6'2" and my wife (5'3") will never forget an old woman who said this phrase very loudly while we were queuing at a restaurant.  It's rude and coarse and I love it, and use it whenever I get the opportunity.

I actually have a rat box (in addition to my wife) which I've offered to the HK Museum of History with a request that they attach it to a suitable lamppost.

Great website; time to dig out those old photos and maps. 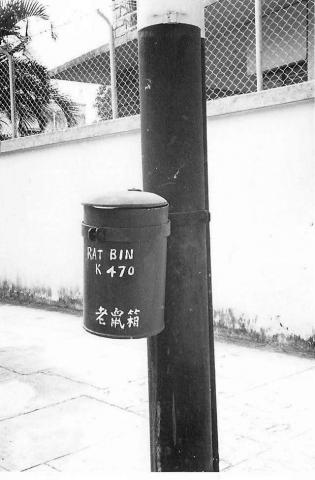 I also noticed one partly visible at bottom-right of this photo: 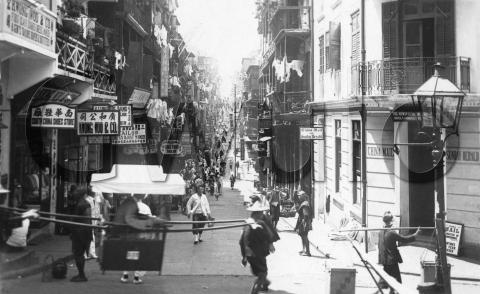 1928 View down Wellington Street, by David

It’s tempting to think the letter ‘H’ stood for ‘Hong Kong’ and the letter ‘K’ stood for Kowloon followed by the individual number of the rat bin. Wonder what the code was for the New Territories and the outlying islands. Can anyone confirm/refute hypothesis?

Just by chance I saw this (on MMIS) in the Hongkong Telegraph from Thursday, September 4, 1902:

Systematic rat-catching, in the course of which bird-lime boards and ordinary rat-traps were used, was carried out throughout the past year, besides periodical house cleansing.

According to the Mr. A. K. Taylor, Chief Inspector of the Sanitary Department, the number of rat-bins distributed in the Colony is 922. Of this number, 432 bins are distributed on the mainland.

"I wish to bring to the notice of the public”, stated Mr. Taylor, "that they should not throw dead rats into the streets. These rat-bins have been placed at various points in the streets for the purpose of receiving the carcasses of dead rats.”

For the last six years no cases of the plague have been reported in the Colony.

There were quite a few used book stores around Hollywood road. They usually sold chinese curios too. A lot of them came from China during the end of of last dynasty as a lot were carried out from the palace by various means in a time of wars and turmoil. You can still find a lot of these shops on Hollywood road without the books of course. As trgan mentioned, the chinese characters are likely just " ’買賣中西書藉'" or "buy and sell chinese and english books". As for book rental, they usually rented some popular titles like martial arts novels and romance novels by some famous authors. May be comic strips (連環圖) too. Of course the rental books would be arranged neatly in order of the author names. This bookstall looks like a mess. Therefore it probably just buy and sell used books without book rental. 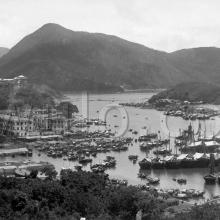 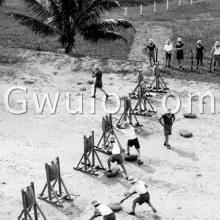 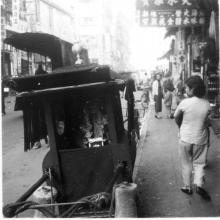