Where: The photographer is standing on Plunkett's Road, looking northwest towards Victoria Peak.

Who: This view made me think of Jean Gittins, and her description of the daily journey from home on The Peak to the Diocesan Girls School in Kowloon, "by rickshaw, Peak tram, ferry and rickshaw again for the last mile along tree-lined Nathan Road on Kowloon side" [1]

The rickshaw to the Peak Tram would have run along the road in the bottom-left corner of the photo, and her view from the rickshaw's seat would have been much like this one.

When: Based on similar photos I've seen, this was taken in the 1920s. As we'll see below, one of the buildings may be able to pin it down to an exact year.

What: Here's what I think we're looking at. (The 1924 Map of The Peak is helpful to identify the buildings.) 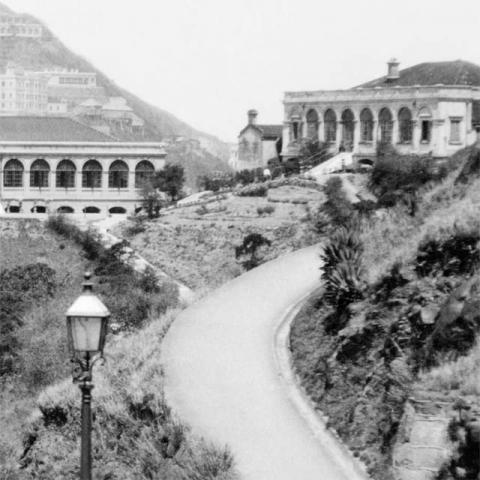 The path on the right leads to these two houses, known as the Admiralty Bungalows. As the name suggests, they were quarters for senior members of the Royal Navy.

Down on the left we can see where Plunkett's Road joins the main road - then known as Stubbs Road, now called Peak Road: 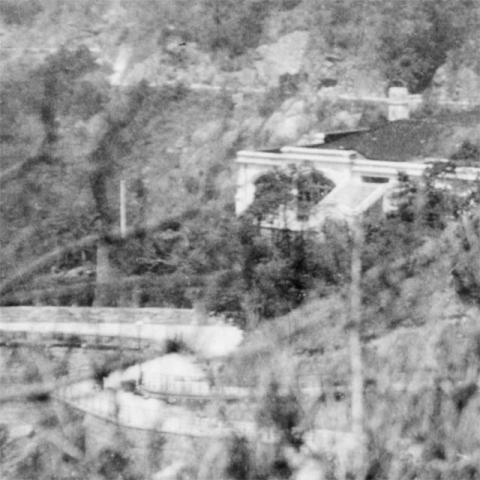 The building above the road is Treverbyn, and in the distance behind its chimney we can see Harlech Road running around Victoria Peak.

Looking up from Treverbyn we see this view: 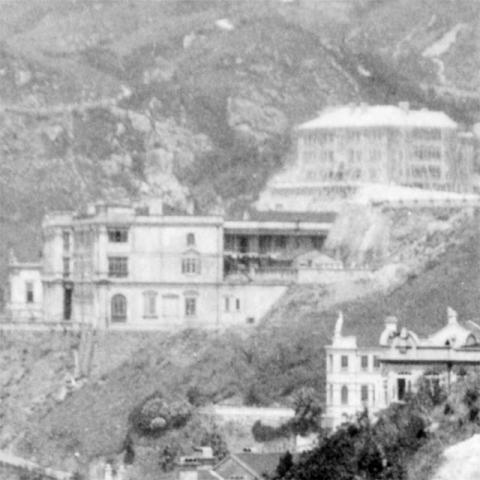 The main building in the centre is the Mount Austin Barracks, a long, L-shaped building. Above the Barracks is a building shrouded with scaffolding, but looking just about finished. I believe it was the block of flats known as 10 & 11, The Peak. Does anyone know their construction date? That will give us a firm date for this photo.

Over to the right, a line of buildings follow Mount Austin Road up the hill: 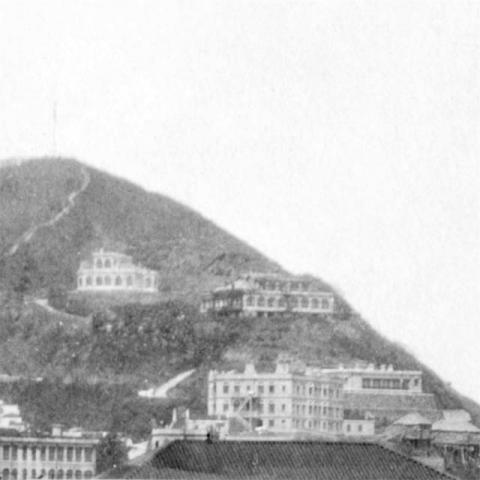 In the bottom-left corner is the right-hand edge of the Barracks. To its right, and mostly hidden by the rooftop in the foreground, is Edge Hill.

Right again there's a much larger building, the three-storey Ewo Mess ("Ewo" is the Chinese name for Jardines). To the right of the Mess are a couple of temporary matshed huts, built on stilts over the hillside. Any guesses what they were for? Was the Ewo Mess also built around this time, and these were temporary huts for the workmen?

Above the huts is the squat looking Tor Crest, then above that are Meirion on the right, and Bahar Lodge on the left. Keep climbing, following the path up from Bahar Lodge - can you see a thin line reaching into the sky? That was the Signal Station's flagpole. They'd raise flags there to signal the arrival of different companies' ships into the harbour.

Finally, we have the Eyrie and its hilltop lookout: 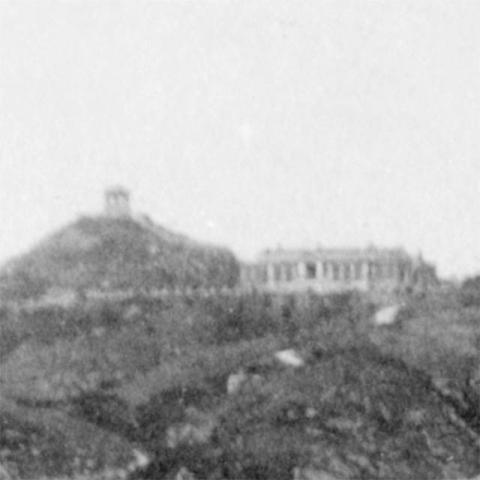 What's there to see in 2012? Here's a similar view, taken earlier today: 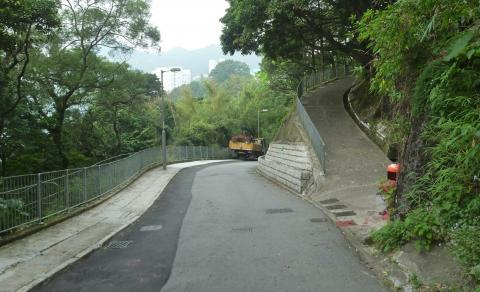 The old open views are difficult to capture now, as there are a lot more trees and bushes blocking the view. We can see the path on the right is still in the same place though, and the small retaining wall (next to the orange litter bin) has survived from the 1920s til now.

Here's a view from higher up Plunkett's Road, where we get a better view of the skyline. 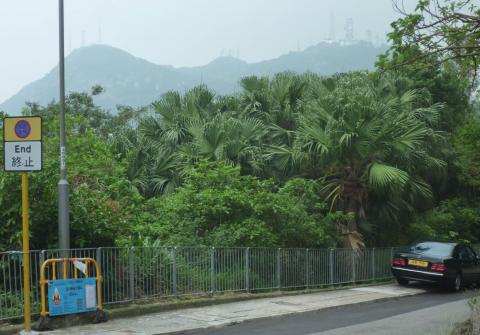 Modern communications have long out-grown the old flagpole. Its electronic descendants now cover all the nearby hilltops.

Fingers crossed I've matched up the buildings correctly. Please leave a comment below if I've made any mistakes, or if you can see anything interesting I've missed.

And if you live up on The Peak and can see a view like this minus the trees and bushes, please could you take a photo for us all to see?

This was one of the areas that suffered in 1941, during the fighting against the Japanese. The Mount Austin Barracks were damaged during the battle, found in a ruined condition at the end of the war, and demolished soon after. Numbers 10 & 11, The Peak didn't even last that long. During the fighting they were in the way of the British Artillery, who solved the problem by blowing them up!

It would have been sedan

These are the same two houses as seen from Mt. Austin.  Cloud Nine is the one in the distance on the right far right on its own hill .  Perspective does funny things.

I've seen a simimar angle to your photo, but never determined where the photographer was standing. Rickshaws on the Peak

Yes, it appear there were rickshaws on the peak, there's a pictre on Gwulo of the sedan chairs around the Peak Hotel, and there are rickshaws in the background.

this view from google maps is

this view from google maps is good:
http://goo.gl/maps/UO8I8

The path of the right appears to be to Mountain Block though, not Cloudridge

The Peak roads had been improved sufficiently to take light vehicular traffic and rickshaws were replacing the sedan chair, but it was still a long journey by rickshaw, ....

Thanks for the extra photo & Google Maps. I'll take a closer look at them when I'm back home, and update the Admiralty Bungalows info. 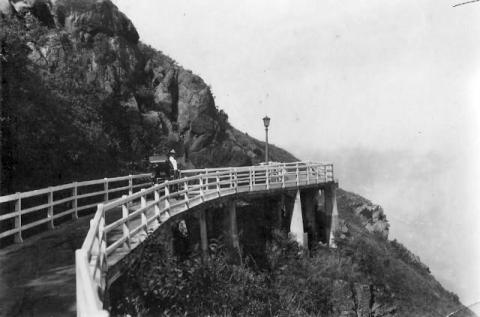 I think this photo was taken after Chamberlain Road (Peak Road) was widened and Peak Mansions built. 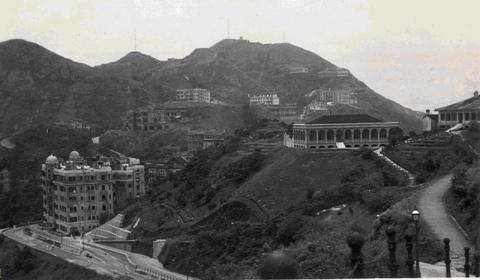 Perhaps the photo was taken

Permalink Submitted by annelisec on Sat, 2012-09-22 14:19.
Perhaps the photo was taken from The Mount. claoud Nine is not the same as Cloud Ridge which was also called Tjbato

I've just had another look at the photo & maps, and still think these buildings above Plunkett's Road are the Admiralty Bungalows:

I can't see any other buildings in that part of the map. Please can you tell us some more about why you think they're not?

To see where the photographer was standing, if you walk down Plunkett's Road and watch out for the above path on the right, it's still there today. As 80sKid has pointed out, I made a mistake to say it led to the Admiralty Bungalows. Today it leads to Mountain Block. I'm not sure what building was there when the 1920s photo was taken, Mountain View perhaps?

Let's put more photos showing them on the "place" for Admiralty Bungalows.

this photo, dated 1910 on the govt website - gives a good high perspective - you can see the Admiralty bungalow etc

I had a good wander round the path show in the 1920s photo. The path shown also led to the Commodore's Bungalow (on right) as well as the Admiralty Bungalow. Paths are still there though lead to nothing now. I did find buried deep in the jungle the foundation stone for the Commodore's house - a large granite square block about four foot on each side, with the words The Stone Was Laid By Mrs Swinton Holland on January 1897. Seems to have been chucked down the hillside at some point.

Anyway, she was the commodore's wife when the house was built.

It would have been a sedan

There was a rickshaw station just opposite the Peak Tram station (which became the Garden Cafe post-WW2). Many resident owners had their own private rickshaws as well (and the Hotungs would have had at least one). It was possible to telephone the rickshaw station and order rickshaws in the same way that people order taxis now.

I think these show the Admiralty Bungalows. The lower bungalow at some point in time has been extended. 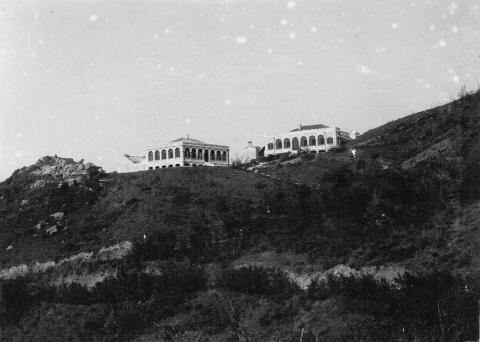 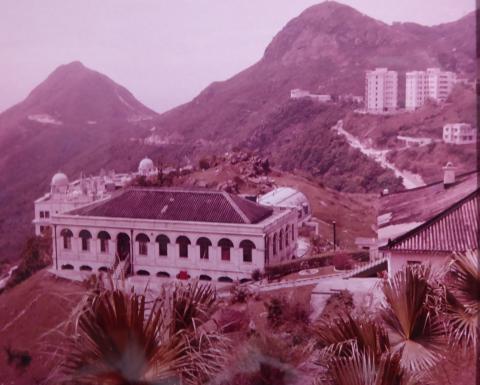 David has already noted that his photo shows both "Treverbyn" and a scaffolding clad "10 & 11 The Peak" - suggesting that it was nearing completion. At https://gwulo.com/node/9536 I've suggested that;

- "Treverbyn" was demolished at sometime between January and October 1924.

If so, this photo was taken between 1921 and October 1924. Corrections welcome.

re: Date of Photo 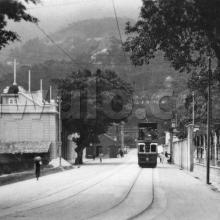 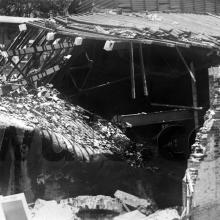