Where: Looking south along Wong Nei Chung Road in Happy Valley. On the left of the road is the racecourse, while behind the walls on the right are several cemeteries.

The ornate stone gateway in the right foreground was the entrance to St Michael's Roman Catholic Cemetery. The cemetery is still there, but we've lost the old wall and gateway to a later road-widening:

When: This comes from an album of photos dated to the mid 1920s.

What: The tram is a double-decker, but one of the older models that only has a simple canvas roof. 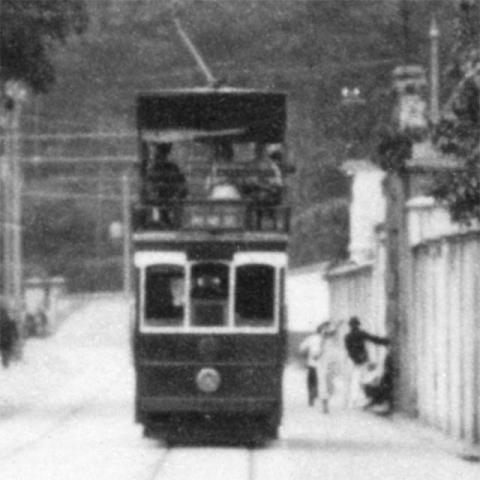 Can anyone tell us more about the building on the left? 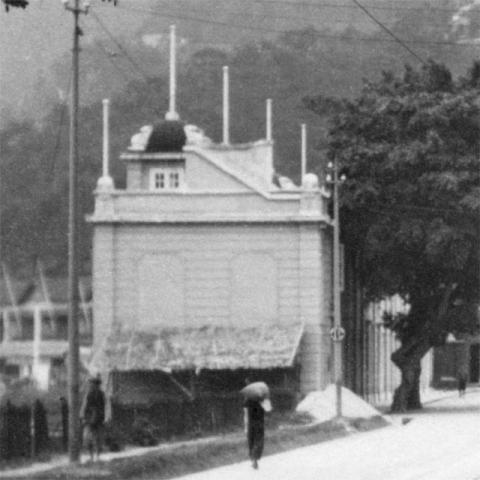 It looks like a grandstand for the racecourse, but it's on the small side compared with the larger grandstands visible in the distance. I wondered if it was built as a replacement for the matshed stands they used to build in the north-west corner of the racecourse until the terrible fire of 1918 [3]. Can anyone tell us more about it?

Who: There is a group of people next to the tram. Have they just got off the tram to visit the cemetery, or just happened to be standing at the gate as the tram passed by?

And how about this man? 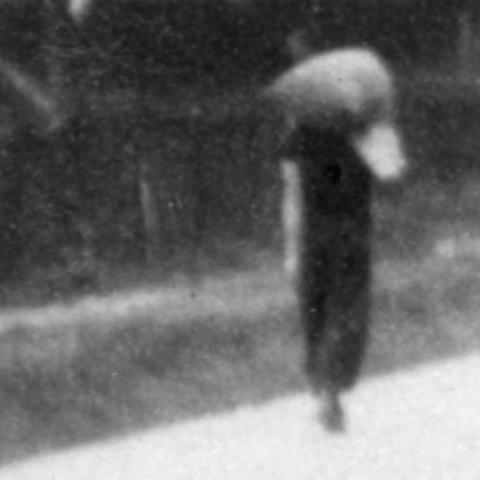 Can't afford the tram fare, or can't manage to squeeze whatever he's carrying past the tram conductor?

And where is he heading? Home to Wong Nai Chung village perhaps, further along the road? It'd depend on the exact date the photo was taken. The village pre-dated the arrival of the British in the 1840s, but it was abandoned after the great Typhoon of 1923 [4]. So if the photo was taken around 1925, he's probably just carrying something to either the racecourse or one of the cemeteries.

What else can you tell us about this photo?

PS An update on last week's photo of the beached ship - I got both the year and the ship wrong! It was actually a photo of the Chinese Navy's ship Hai Chow, washed ashore near Kowloon City in a typhoon of 1936.

I have a few observations:

1.Was there a second set of tram rails there?

2.     The photographer was standing on a location where Wong Nei Chung Road started to turn North-East.  In this respect the gateway ornate stone gateway in the immediate foreground by the right was not the Saint Michael's.  The gateway right besides the tram was.

3.The gateway in the foreground was in fact the old entrence of the Muslim Cemetery;

4.     As for the location of the building on the left hand side....., I wonder if it was one of the stables.   In the 1960's there used to be a two or three story stables there, with sloped walkway for the hourses.  That particular bend of Wong Nei Chung Road was commonly called the Stable Bend.    Even after the total rebuilt one of the terraces is still being called Stable Bend Terrace there.

Information on the Tramlines

Copied from here  and here

According to the Hong Kong Tramways website, tram operations commenced on 30 July 1904 and the earliest tram depot was in the Bowrington Road/Canal Road area. It was not until the early 1920s, that the tram depot in Russell Street was built.

The following information was found through the public archives:

b) a loop line operated from Praya East into Bowrington Rd, thence westwards along Sharp St to the junction with Morrison Hill Rd and joining Praya East via Tin Lok Lane.

On 8 May 1913, Government approved the construction of a single line between Wong Nei Chong Village and the Happy Valley Racecourse Grandstand.

1931 - Double tracking of the Causeway Bay - Shaukiwan Line was nearly completed. Only a mile of the single trackline was yet to be finished. (Source: HK Daily Press 28 February 1928)

1927 End of 1927, half of the fleet were converted from the canvas curtain arrangement to covered top decks. (Source: China Mail 8 March 1927)

Probably the building below in the foreground. 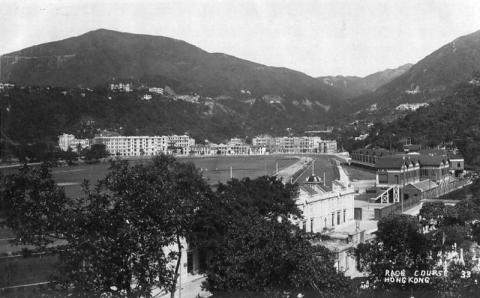 Thanks Thomas. I've just been looking at a 1930s map of the area (Plate 3-5a, Mapping Hong Kong), and you're right. The Roman Catholic cemetery starts where the wall on the right changes from ornate to plain.

I wonder if that means the gateway to the Roman Catholic cemetery on the 'today' view is the same gateway that was there in 1925, just moved to the right when the road was widened?

Moddsey, thanks for the photo. It's good to have a view of the building from a different angle.

I'm not sure if it is a stable or not. The same 1930s map marks a building as 'Stables', but it's the building further south and around the corner in Moddsey's photo. Or maybe the label is meant for all the buildings along that section?

Another oddity is that the HKJC website says: "1931. The first permanent stands at Happy Valley are built." Yet the buildings in these 1920s photos already look like stands. Perhaps they differentiate between buildings that are only grandstands, and buildings that are a combination of stable and stand.

Thanks for the info about the double-tracks and tram dates too. If anyone knows when the last canvas-covered double-decker went out of service, please let us know as that will help with dating these photos.

Re: Original gateway of Saint Michael's

I believe they have saved the stones of the arch and the statue of the Arcangel.   The original gateway also has a couple of plates with two Chinese phrases saying "今夕吾軀歸故土“﹐ “他朝君體也相同”.  These togather with the arc and the statue were moved the Northern end of the Cemetery, which is visible through Street View.  The original gateway is in a direct line towards the Chapel, ie, along the cental lane.  They have recently build another arch in the current Main Entrance on the southern side.

After the fire in 1918, four large stands were completed in early 1919 (PWD Annual Report). I believe the light coloured building with 4 domes on top is this structure. 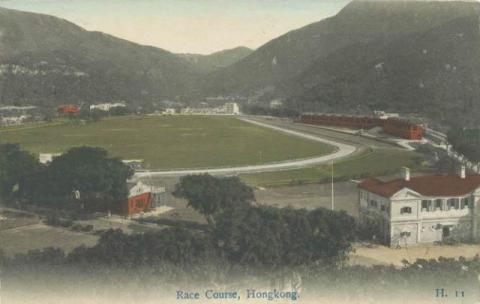 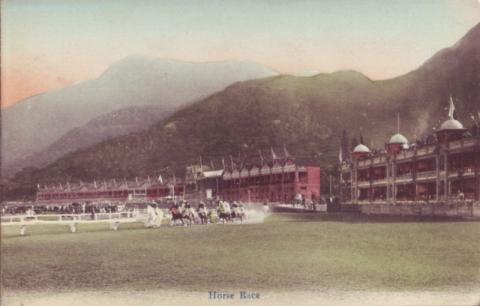 Thomas, glad to hear the old gateway has survived.

Moddsey, thanks for the extra info & photos. I've made a Place for the building mentioned above.

They have only restored the arch.  The gateway used to have the office and another room, on both sides of the arch inside the walls. 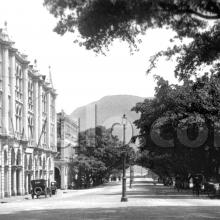 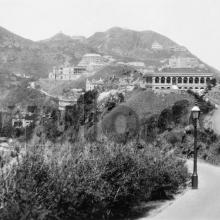 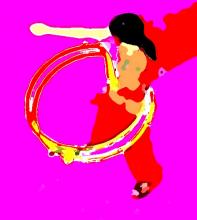