(If you're looking for details of graves and burials in this cemetery, please visit the page http://gwulo.com/node/8746 for details.)

On Wednesday I paid a visit to the Hong Kong Cemetery in Happy Valley. If you're interested in Hong Kong's history, it's well worth a wander around.

Though it can get frustrating walking past gravestones. Often all you get is a person's name and age, when you really want to know who they were, and what were they doing in Hong Kong. If only the dead could talk...

Well, on Wednesday they did! I was very lucky to make the visit in the company of Patricia Lim, the local historian who wrote the 'Discovering Hong Kong' books. Her recent project has been to research the stories behind the people who are buried in this cemetery. Did you know...

These are just a  few of the tales I heard - in a one hour stroll, I got to hear story after story. Fortunately, the results of Patricia's research will be appearing as her next book. I'll look forward to making a second visit, with a copy of the book in hand.

END_OF_DOCUMENT_TOKEN_TO_BE_REPLACED

Notes on the cemetery

This thread includes several articles about the history of, and in the cemetery.

If you go into the office to the left of the Cemetery entrance, they have a rather tattered folder containing typed and hand-written records of hundreds of burials and grave locations, apparently compiled over some time. Initially they ask you to give a specific name and fill out a form, etc, but if you're polite and ask nicely they'll let you have a look through it. Incredibly, this info doesn't seem to have been digitized, and when I asked the assistant why not, he said no-one had time.

Dare I ask? Yes I dare! I would love to know if my grandfather and grandmother's grave is still there, or my aunt they all had the surname Tellis. I was told that their graves have been recycled!! That is the have been dug up and new "tenants" installed! Is this true?

The only database I know of regarding graves in Happy Valley is held by Christine Thomas. (twiglet.thomas2@tiscali.co.uk)

I believe she built it up while serving in the HK Police. She will tell you if she has a record of the name and then charge you for details if you want them/

I have no connection with the lady but she has helped me in the past.

Liz, Christine Thomas scheme - letting people know there is information and then charging for it - is very sensible.

Some (they say 13%) of the graves in this cemetery can be checked via www.findagrave.com.

Greg, sorry, no sign of any Tellis names at that site. Modern burials are only for a certain number of years, then the graves get dug up. But I thought the old graves were permanent. Some were dug up when the Aberdeen Tunnel was built (it cuts through some of the cemetery land), but they were relocated to other parts of the cemetery.

Adam, thanks for that tip. I dutifully filled in the form when I visited looking for the Olson graves, but didn't realise it's possible to ask to see the originals.

Greg,   I have checked my HK cemetery database for you but have found no trace of the surname Tellis.  If one of your relatives was Clara Antonia Tellis then you will find the coroners report on her 1974/75 death at the HK Public Record Office.  Also if Augustine or Augustino were relatives then I think there may be a possibility that the family were Catholics.  If that is the case you will need to be looking for their graves in one of the Catholic cemeteries and not in the Hong Kong Cemetery.  My project only covered the former Colonial Cemetery (now the Hong Kong Cemetery) - unfortunately I did not have time in my 20 years in HK to cover the Catholic cemeteries as well.  I hope this may be of some help to you. Christine

My great-uncle Henry DUNBAR died on 1 November 1901; he was in the Royal Welch Fusiliers and was involved in fighting the Boxer Rebellion. I believe he is buried in China and wonder whether anyone can tell me if he is buried in any of the Hong Kong Cemeteries?  He was a Catholic, so if there is a separate Catholic cemetery he may be there.  Any information would be very greatly appreciated.

There's a chance he's buried in this cemetery (Wikipedia notes there are soldiers who died in the Boxer rebellion buried here), or possibly in St Michael's Catholic Cemetery which is just next door. Unfortunately neither have their records available online.

This thread starts with mention of a book that Ms Patricia Lim was writing about the cemetery. I've just noticed that the book, Forgotten Souls: A Social History of the Hong Kong Cemetery, has now been published.

This book follows on from the mapping and recording of the about 10,000 graves that make up the Hong Kong Cemetery for a database which will be held in the archives of the Hong Kong Memory Project and the Royal Asiatic Society among other places.

The book itself is a heavyweight at 624 pages, but it's not clear if it includes a listing of all the graves or not. I'm also interested to know where the database can be accessed online.

I'll send an email to Patricia to ask, but if you find the answer first, please let us know in the comments below.

PS Read more about the book at the HKU Press website: Description & Author, and Index of Contents.

Thank you so much for that information.  I note the records are not available on-line but at least I know who to contact now.

I was not able to include the data base with the book but you will be able to access it through the Royal Asiatic Society who have a copy and plan to put it on their website with a link. The HK Records Office and the Cemetery office near Happy Valley Cemetery will also have copies by the end of April when I get back to HK and have time to distribute them.

This should be a very useful book, and I can already picture it on my reference shelf next to my Norton-Kyshe and Eitel volumes. Much will depend on the quality of the index, of course, with a book of this nature. As far as I'm aware HKUP requires its authors to compile their own indexes rather than commissioning a professional indexer, which can be a downfall as indexing is a very specialised profession. I look forward to buying it very soon.

buried at the bottom of a government heritage paper is the following:

* Hong Kong Cemetery. .. has been included in the list of new items for consideration of the need for grading by the AAB having regard to an assessment of its heritage value by the Expert Panel.

So if we're lucky it might be restored some time soon. Incidentally the paper mentions three graves of revolutionary figures in the cemetery associated with Sun Yat Sen

When the cemetery walk was about to take place on 14 January 2012, I thought I would add a comment about the CEW & Co mark on many of the gravestones. C.E. Warren & Co. (1901-1941) was founded in Hong Kong by my grandfather, Charles Warren. It is less well known for its 30-year production of monumental masonry than for tile manufacturing, building and sanitary engineering. Thanks to Patricia Lim’s publication on the Gwulo site of all the inscriptions in the Protestant cemetery, resulting from the research for her book, Forgotten Souls, (HKUP 2011), I have counted 90 graves in the cemetery, bearing the CEW trademark of the company – 70 within the lifetime of Charles Warren up till 1923, and 20 during the subsequent tenure of his son, Leslie Warren. 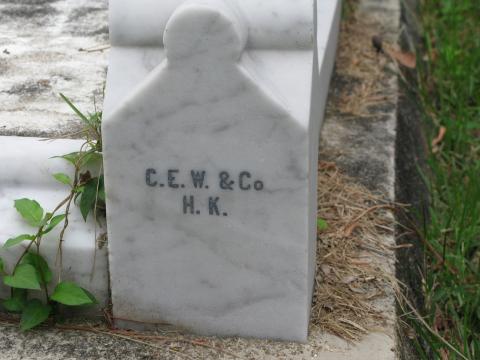 The first gravestone erected in this cemetery by C.E. Warren & Co., dated 1905 is for a Eurasian, Kathleen Kew (02/05/17). Kathleen, if not Eurasian herself, had married into the high-achieving, high-earning Eurasian Kew family, who lived in the mid-Levels and mixed freely with Europeans. (Lim, pp. 519-21). (Years later, Kathleen’s widower, C.H.W. Kew, and other Kews figure in The Straits Times, (3 September 1926, p. 3), for being stripped of their jewellery and watches by pirates, who boarded their boat during an all-night fishing party.)

The final grave in the Protestant cemetery with the CEW trademark is dated 1935 and erected for the Scottish engineer, William Murray Stratton (18/04/11). He was chief engineer of the Railway, who, during the 1925-6 anti-foreign boycott in Canton, personally drove an engine crammed with European women and children to Hong Kong, with some women swinging from the footplates (Lim p. 482).

I have not found specific addresses for the C.E. Warren yards devoted to monumental masonry, although the expanding tile and hardware shops are recorded as moving to Bowrington in 1910.

Charles Warren himself, who was baptised a Catholic in 1900, is buried in St Michael's Cemetery in plot no. 4379.

my research is on the architects in HK from 1841-1941. Iwould like to know more of CW especially any building he had designed although he was not practice as an architect

Henry (Harry) Dunbar's name is recorded on a memorial in the Hong Kong Cemetery.  A photograph can be obtained from:

Here's the direct link to that memorial: http://www.twgpp.org/information.php?id=1815422

CNN journalist Elizabeth Yuan has written about the Hong Kong Cemetery, and Patricia Lim's research and book about it:

A couple of contributors to Gwulo get a mention too!

Hello, after years of research, help of cousins visiting Hong Kong, and wonderful friends in the Library of the Hong Kong Supreme Court, we finally found the final resting place of our cousin Dorinda Sara JONES (née LEE, aka Dora) [1865-1900] in Hong Kong Cemetery in plot 18   /08/08. I wish I had found your website earlier to save a lot of time.  I have joined the Gwulo website and added a simple history of Dora in your searchable people.

When I first came to the site, there was a search I could do of the people in Hong Kong Cemetery and it gave me about 5 Jones names but Dora was not there.  I got the feeling I had to somehow get her name there so people researching could find her.  Do you know where this searchable site can be found and not just in the overall search of Gwulo?  Thanks for your efforts on this website and I can only hope this leads to finding Dora's living relatives around the world. Susan

Patricia Lim has put the database onto the Hong Kong Memory Web Page:

I had the opportunity to visit the inside of the Chapel at Hong Kong Cemetery today (within the formerly called Protestant Cemetary)  The building was built in 1845 (at the same time as the surrounding cemetary) and was designed by the Surveyor General's Office; it is one of the oldest, if not the oldest, western building in Hong Kong today.  It is a small cruciform-shaped single-story pitched roof building in the Tudor Revival Style, with coped buttresses, flat-pointed Gothic arched windows and doors, gable-end walls and sqaure-shaped label mouldings, a Chinese tile roof, and rendered plaster exterior walls with some granite detials.  The building is a listed Grade 1 building in Hong Kong.  The Chapel was originally used for funeral services, but since burials no longer take place in this cemetery, the Chapel is not longer used.  The interior floor is a beautiful black and white marble square checker board pattern.

Thanks Jennifer, I've made a

Thanks Jennifer, I've made a Place page for the Chapel in case we can add any more information about it.

Where to find Hong Kong's history 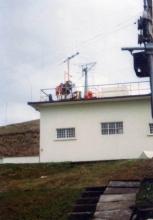