When: Here's the pencil note on the back of the photo, showing it was taken in October 1937, from H Block.

Where: Where was H Block?

Looking at the line of the buildings, I think the photographer was just above / south of the Bowen Road Military Hospital. A second photo that I bought at the same time is from the same photographer. It shows a different view, marked 'From Military Hosl (sic.)'.

There was a Barrack Block above the hospital, visible in the foreground of the photo below:

I guess that was the H Block (maybe H for Hospital?).

What: There are a couple of large houses in the foreground, one just below the photographer: 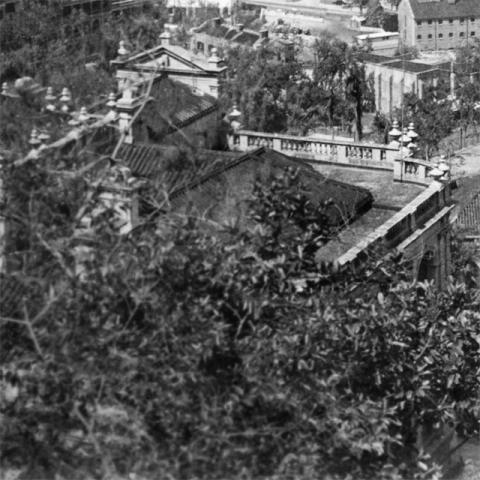 And one over to the left: 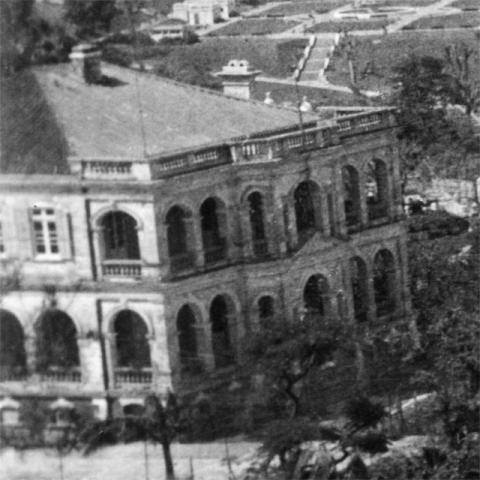 Does anyone recognise them? They're on the slopes along Bowen / Macdonnell Roads.

In the middle-distance it's all army land: 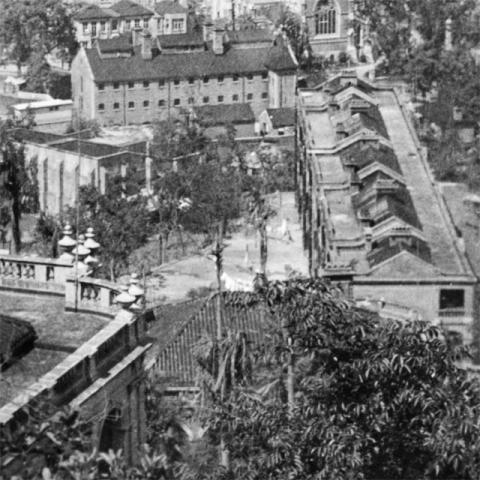 The long block stretching away from us is marked "A. Block" on a map of the barracks [1]. The building beyond A. Block, with the small windows, is marked "Cells", and is part of the Detention Barracks area. Then on the left, the high-walled building at an angle to us is marked "Racket Court".

Beyond the Cells runs Garden Road, and across the road we can see these buildings: 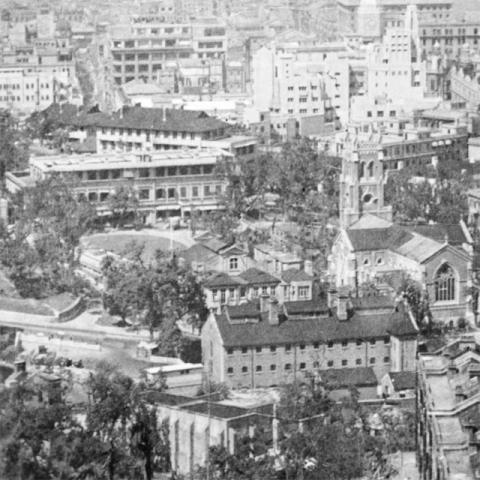 St John's Cathedral is clear to see on the right of the photo. Next to it is the old Volunteers' HQ building, with an open grassy area behind it. Beyond the grass is the cluster of Government Offices.

Further up Garden Road are these buildings: 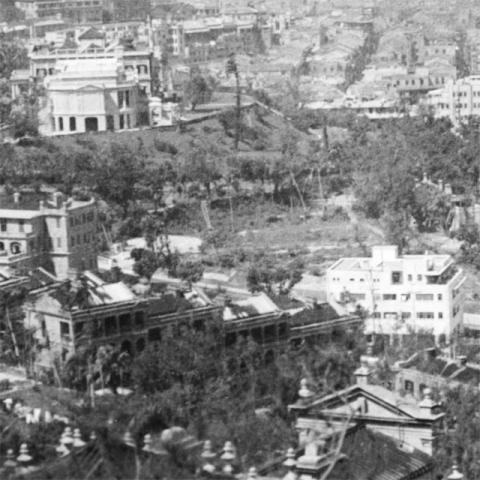 The white building on the right was the Peak Tram's lower station. Running up the hillside from that building, towards the left edge of the photo, is a terrace of Army buildings. They are marked "B. Block" on the map, and a similar terrace marked "C. Block" is partially visible behind them. C. Block is still standing today, and now houses the Hong Kong Visual Arts Centre.

Across Garden Road from the Peak Tram station is a rough patch of open ground. For many years HSBC had a couple of large houses here for their Manager & Sub-Manager. The houses had already been demolished when this photo was taken. Later the American Consulate will be built there.

On the right of that land, facing the Government offices, there's the pitched roof of the old stable buildings peeping through the trees.

Finally the building at top-left, above a grassy slope, is the Governor's residence. We're looking at it sideways-on, with the ballroom extension facing us. The buildings were extensively re-built a few years later, during the Japanese occupation of Hong Kong.

Who: I don't have any more information about the photographer, just those two pencil notes. Maybe he was a doctor at the hospital, or a patient?

If you've spotted any mistakes, or anything interesting to note, please let us know in the comments below.

I bought this because I thought it was an unusual view. We see lots of photos taken from the Peak, and looking down over Central, or East over Wanchai. But views of Central from the East are less common.

Although I usually buy individual photos, later it's often clear that two or more photos bought at the same time were originally part of a single album. It's a popular way to sell photos: buy an album, then break it up to sell the photos individually. It makes sense from the seller's view, but it's a pity that the links between the photos, and any information about the photographer get lost when this happens.

The large house in the

The large house in the forground, isn't that the one in the image "BMH c.1925" that I posted last year? 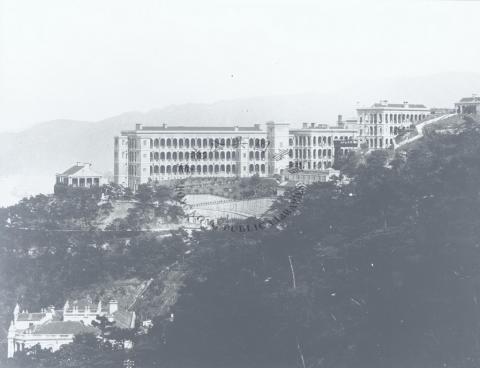 I believe A Block was Alexander Block, B Block (where I used to live) was Birdwood Block and C Block was Cassells Block. All were named after famous Generals or Field Marshals.  The only one which remains today is Cassells Block which, as David says, is now the Visual Arts Centre.  The "racquet court" is now the Squash Centre.  I used to play squash there when I lived in Birdwood Block.

According to the Background Information of the Hong Kong Park, four (4) garrison buildings had been preserved and still in use.

Thanks Marlowe, the roof in each photo matches nicely. Looking at your photo, I believe the building is Braeside.

Interesting to see that today's squash centre is on the site of the old Racket Court. After the army moved out from the area, was the old Racket Court building left unused, or was it opened to the public as an earlier version of today's Squash Centre?

Lew and Mollie note that the Helena May is visible on the left of this photo:

I can't identify the 2 large houses around Bowen Road area.. in 1937 there were so many houses in just that style.  But I can identify the then CSO (Colonial Secretary's Office) where I worked in 1938/9 before the ARP Dept. transferred to its own building in Happy Valley;  the CSO is the black-roofed building behind the verandahed block beyond the grassed area.

Thanks for everyone's comments and extra information,

When I worked as intern at Glenealy School two years ago, I was told that during the late 70s and early 80s, before the premises on Kennedy Road were acquired by the ESF, that the school occupied a site "located where the Squash Courts are today". Would that have been the A Block of the Barracks? If so, how were they accessed from Garden Road?

Victoria Junior School was a Primary School for forces children.  It occupied a site near where the squash centre is now (not A Block, which I believe was Alexander Block).  After VJS closed in the late 80s it was taken over by Glenealy School for a few years.  My father was headmaster of Victoria Junior School from 1961 to 1969 and I was a pupil there myself in 1961.  We lived in Birdwood Block (B Block) which was almost next door.  There is a Facebook page for Victoria Junior School with some photos.  There was a gate next to the Peak Tram Station but we normally used the gate on the east side.

Thanks for the extra information. I've made a Place for it at: http://gwulo.com/victoria-junior-school

Below the hospital was the Sergeants Mess and a residential block for married staff, "H" block.

Richard Wong has posted an annotated map of the barracks, with names & details of many of the old buildings:

There is a "Hamilton Block", and its location matches the "H Block" Marlowe describes above. At first glance it doesn't seem to match the viewpoint for this photograph though. 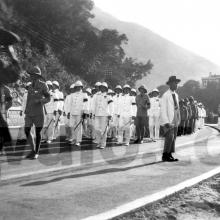 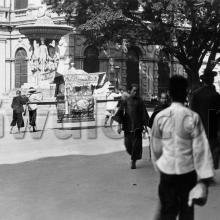