When: 11th September 1928, according to the back of the postcard: 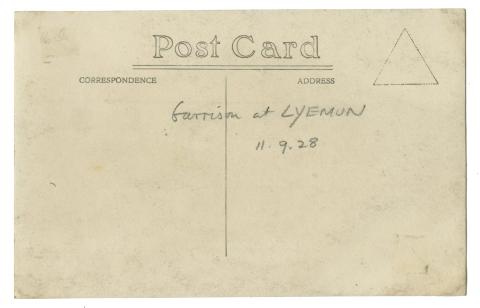 Where: That also tells us we're looking at the "Garrison at Lyemun". Today it's the site of the Museum of Coastal Defence [1], but in 1928 it was one of Hong Kong's coastal artillery sites. They were built to defend the harbour from attack by a foreign navy.

When the site was built in the 1880's [2], it included four different batteries, the West, Central, and Reverse batteries, together with another battery on top of the Redoubt [3]. We can see one of the batteries: 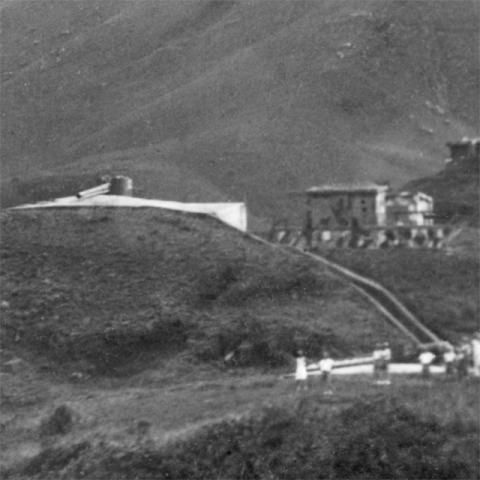 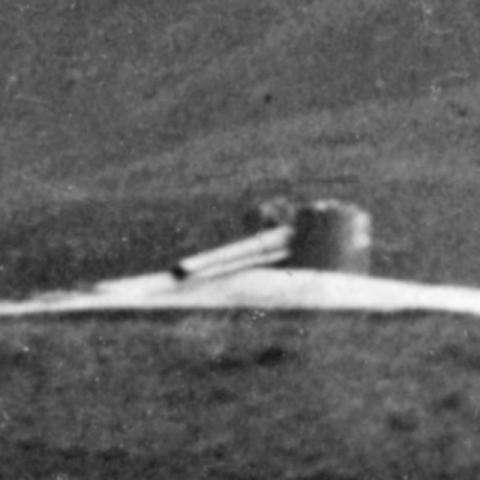 Looking at maps of the area, I think this is the Lyemun West battery. Can anyone confirm that, or do you think it could be one of the other batteries?

Who: The garrison's troops are lined up on display: 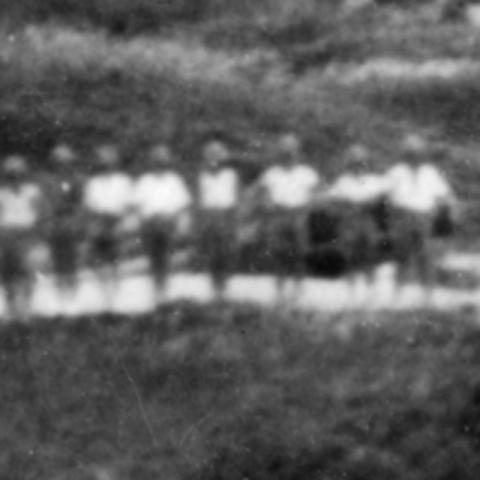 They aren't very clear. I can't make out whether they are Indian soldiers in turbans, or British soldiers in topees.

This photo was taken from a ship in the harbour, and probably by a professional photographer as it is on postcard paper. Then was he just lucky to catch the soldiers on parade like this, or was the parade arranged so he could get a good photo for them?

What: Other items of interest are the buildings behind the battery, with the big observation windows. What were they for? (And note how their camouflage renders them invisible to the naked eye!!) 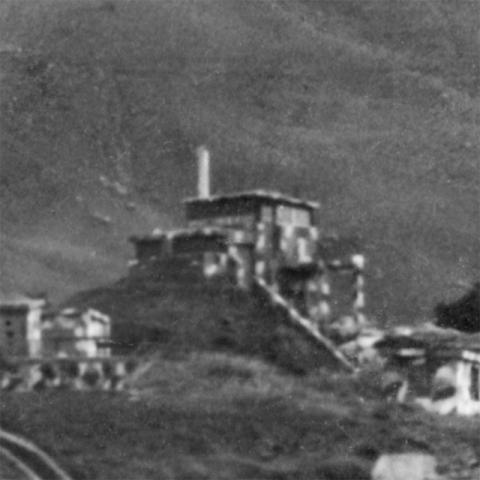 Finally, there's a road snaking up the hill towards Lei Yue Mun Barracks. 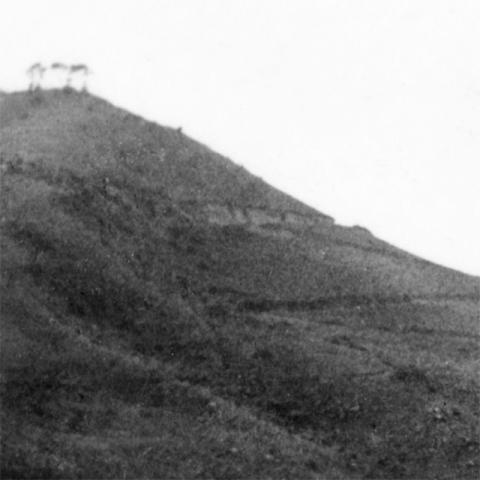 In the 1920s, the main traffic up and down the road was probably people and mules. By the 1970s, the HK Motor Club were racing cars up to the Barracks for their Hill Climb races [5]. I wonder if they used this road at all?

Trivia: This location was selected as the best spot to site guns to protect the eastern entrance to the harbour [2]. A review in 1886 [4] wasn't very impressed though:

This is a very interesting photo of Hong Kong’s early defences. Thanks for putting it online.

At first I tended to agree with your conclusion that the two gun emplacements in your old photo are the Central Battery at Lyemun but, having visited the area yesterday, now I don’t think so.

As you mentioned the Central Battery is within the grounds of the Museum of Coastal Defence. At $10HK admission and free parking it’s brilliant value. On leaving the entry tower at the upper level of the Museum, the first feature you come to is the Central Battery. According to a signboard it was constructed in 1887 and housed two guns and a Depression Range Finder, but was abandoned in 1905, well before your photo showing the guns still in situ was taken in 1928.

Other discrepancies between the photo and today’s reality become apparent when looking around the Central Battery site.

Lastly, on the ground today there’s no sign of the buildings seen in the old photo. In the photo they seem to be further away from the photographer than the upper gun emplacement. However, on the ground it’s difficult to see where they could have stood as the land falls steeply beyond the road at the back of the Central Battery.

So, if the photo is not of the Central Battery, then where?

I had a look at the West Battery, which stands next to the Central Battery. As in the photo it has a concrete lined trench connecting it’s upper and lower emplacements, but that’s were the similarities end.

According to onsite signboards the West Battery boasted two 9 inch guns in 1887 which were replaced by 4.7 inch guns in new, smaller, emplacements infront of the old ones sometime between 1898 and 1916. Armoured shields of 7.6 cm steel plate protected the new guns. In your photo there are only two gun emplacements, not four, and the guns themselves don’t seem to be protected.

Furthermore, the West Battery is lower than the Central Battery to its east, but this is not the way the land lies in your photo.

So your photo is not of the West Battery either.

The only other gun emplacements at the Museum that are situated well above sea-level, as in your photo, are the two “disappearing” guns within the Redoubt. The Redoubt was constructed in 1887. As your photo shows no sign of its prominent walls, and the two guns are clearly visible not “disappeared”, your photo is not of them.

However, looking from the Redoubt towards Sai Wan Hill and Mount Parker, their ridgelines show strong similarities to your photo. Obviously, the battery in your photo was very close to the Redoubt.

(I took a photo but failed to upload it, sorry)

One difference is that the top of Sai Wan Hill is flatter in your photo than the view from the Redoubt. Zooming in on your photo shows what I think are the east and north facing walls of Sai Wan Fort dominating the top left side of the summit of the Hill. The fact that the eastern wall appears to be so long suggests your photo was probably taken from a position to the north east of the Lyemun Redoubt.

An undated map at Page 52 of PANG Siu-yuk’s academic study at;

shows two batteries, namely the Reverse Battery and the Pak Sha Wan Battery to the east of the Lyemun Redoubt. I couldn’t see any sign of either from the top of the Redoubt yesterday, but they could be there, hiding in the thick jungle.

I didn’t notice any mention of the Reverse Battery in the Museum and don’t know much about it. The above mentioned map says it had two 12 lb guns. Rob Weir says it was constructed in 1877 and its ruins were still there when he visited in 1997 (Gwulo node 11016).

According to a signboard in the Museum the Pak Sha Wan Battery was completed in 1903 for four 12 lb guns, but by 1941 these had been replace by two 6 inch guns. PANG Siu-yuk’s paper (Page 64), referred to above, agrees on the completion date, but states that it housed three 6 inch guns. Rob Weir also agrees on the completion date and notes the ruins were still there in 1997 (Gwulo node 11026).

Today, both the Reverse and the Pak Sha Wan Battery sites are within the LeiYueMunPark and HolidayVillage. I tried to find a path in from the nearby Heng Fa Chuen, but failed. I’m not sure if there’s a public right of entry into the Park and Village. Does anyone know of a way in?

Rob – as you visited both the Reverse and Pak Sha Wan Batteries in 1997, do you recognize David’s photo as being of either?

Thanks very much for following up on this. I'd guessed it was the West Battery in the text above, but hadn't convinced myself very well. The shoreline didn't look quite right.

I think your suggestion of Pak Sha Wan battery makes a lot more sense. In addition to the layout of the land, Rob has noted there was a BOP there, http://gwulo.com/node/11834, which could be the camouflaged buildings shown in the photo.

From documents in the National Archives at Kew, this can be positively identified as Pak Sha Wan Battery. The obvious gun is the No.1 position, with a set of steps leading down to where the personnel are standing, which is the front of the No. 2 gun position. The raised building behind the gun is the Electric Light Director Station (ELDS) and Battery Command Post (BCP), with a semaphore mast above the roof.

Thanks Rob, I've updated the

Thanks Rob, I've updated the Places Shown to be Pak Sha Wan battery. 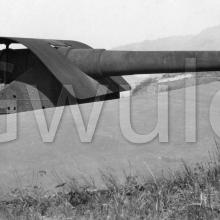 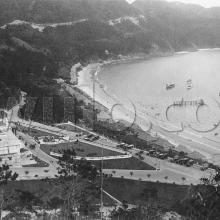