There were dockyards here from the 1850s:

Built by John Lamont, in the 1850s, the first dock [to the west] was known as the Lamont Dock and proved highly successful. In the early 1860's, Lamont added another dock to his enterprise, the Hope Dock [to the east], but before the latter was finished, both docks were bought, in 1865, by the large and very successful firm, the Hong Kong and Whampoa Dock Co. of Hung Hom.

On the 15th of June, the new dock at Aberdeen (on the southern side of the Island of Hong Kong), belonging to the Hong Kong, Canton, and Whampoa Dock Company, was opened in the presence of the governor and a large party of invited guests. This dock is over 400 feet long ((410 feet in length)), 99 ft. broad, and 34 1/2 deep. It has been cut out of the solid granite of which the island is formed, and is a very magnificent work. It is lined with hewn granite, and presents a very imposing appearance.

The dock is, of course, constructed with the intention of accommodating either the ironclad Warrior or Black Prince (for draught of water), or the Pacific Mail Company's steamer the Great Republic (for breadth of beam); and we understand that there is only one of the new ironclads - viz., the Agincourt, which draws some 26 feet - which is too large to enter the Hope Dock without being lightened previous to doing so. Under these circumstances, it would not be surprising if her Majesty's huge ironclads be sent out to the China station, for the existence of this magnificent dock now opened in Aberdeen Bay, Hong Kong, removes what would otherwise be an insuperable objection to their presence - namely, the impossibility of dock repair in the event of an accident.

This photo from HF Siu, shows the two docks, sometime in the late 19th century: 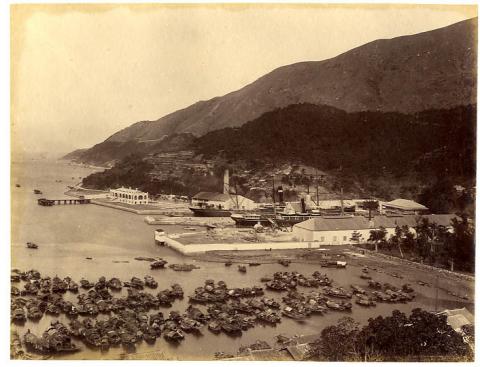 While I think this photo from fivestar, dated 1971, shows the dockyard closed, and the area being reclaimed. 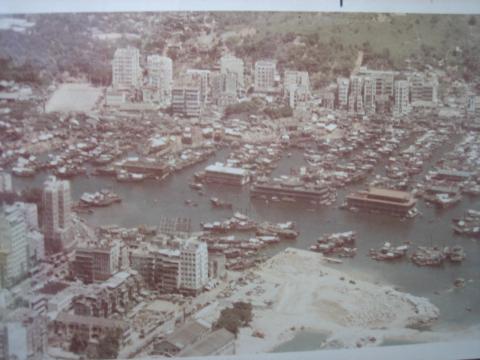 I've provisionally set the dates for the dockyard's existence to be 1855-1970, but please leave a comment below if you can be more accurate.

PS thanks to Ho Lim Peng for letting us know the old dock names.

END_OF_DOCUMENT_TOKEN_TO_BE_REPLACED

From the advert dated 11 January 1864, it would appear that Lamont's Dock came into operation in 1859. 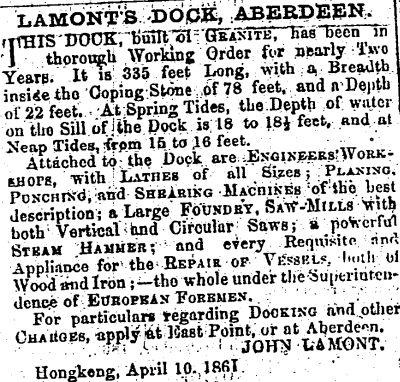 This Hedda Morrison phot has lots of detail (double-click the thumbnail to zoom in): http://via.lib.harvard.edu/via/deliver/deepLink?_collection=via&recordId... 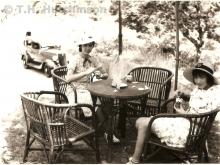