Estimated demolition date, based on completion date of next generation.

END_OF_DOCUMENT_TOKEN_TO_BE_REPLACED

Given nickname of ‘flat Iron’ due to resemblance of domestic utensil

Another early tenant was the HK Stock exchange

Another handsome addition to Hongkong’s buildings is now free from the hands of the contractor, save for the internal fittings. The new block of building known as Alexandra Buildings jocularly called by some people " The flatiron " on account of its shape , is now completed. The block was opened for business purposes at the commencement of the present month. It was built by the Hongkong Land Investment and Agency Company for Messrs A. S, Watson and Co., and is sublet to many leading professional and commercial firms, so may well claim to be the new business centre of Hongkong, considering also its close proximity to the spot where the new Post Office is being built and to Blake Pier and the Ferry wharf.

" The Building is worthy of its fine position. It stands on the triangular portion of reclaimed land between the converging Chater and Des Voeux Roads, and is bounded on the east by a private lane connecting these two roads. The floor at the street level is divided into three sections, forming shops and stores for Messrs. A. S. Watson and Co., and Messrs Powell and Co., The former company occupy the large portion at the apex, extending back for half the length of the building, Messrs. Gaupp and Co., have the Chater Road Flank.

These firms are fitting up their premises with modern arrangements of showcases and pictures, and will possess the most up-to-date showrooms in the Colony. Messrs A. S  Watson and Co., have spared neither expense nor trouble to make their portion one of the finest specimens of shop fitting in the Far East. Their principal apartment devoted to the general business is particularly spacious and lofty, and excellently lighted. Round the walls are arranged the windows and showcases, and in the centre the counters, fixtures, and fittings stand, all backed with mirrors, and embossed glass plates.

This has been carried out in pleasing style, first class polished and carved teak wood having been used. The work has been performed by Messrs. A. Tak under the supervision and to the design of the architects of the building. At the end of this apartment are swing doors leading into the smaller dispensing and wine departments, both fitted up in the same lavish style. The building is cellared throughout to provide wine and spirit stores for Messrs. Watson.

The upper floors of the building, of which there are four, are arranged for office purposes, an entrance from each roadway leads through a short-arched corridor into a central hall containing the principal staircase and elevator. These deliver on each floor onto a spacious landing, with corridors running right and Ieft, from which open the various offices arranged singly or en suite to suit the tenants' requirements. Ample accommodation for Chinese Servants is provided facing the back lane and well shut off from the offices.

The building is surrounded by open verandahs designed in a restrained style of Renaissance, The lower storey has large arches standing on a granite base of the Doric order. The upper storeys have two simple orders crowned by a colonnade and principal cornice, above which rise small octagonal turrets enclosing a pleasing arcade of small arches topped by the plain steep gable ends of the roof. The corner of the building is carried up more than 135 feet above the street level with an open dome- capped colonnade rising above the steep conical roof.

In general appearance the building, at present unmarred by injudiciously placed signboards so usually fatal to good street architecture - is pleasing and satisfactory, and is a welcome addition to the big class of architectural building in the Colony.

Internally the keynote is the easy service to all parts of the building, also the excellent light and ventilation throughout. The architects are Mess. Palmer and Turner who have designed and superintended the erection of the building and its fittings throughout, The Kang Oi firm are the builders. The tiles, sanitary goods, grates, etc, were supplied from England. The electric lift is by the Otis Co., fitted by the Hongkong Electric Company, who have also installed the electric light. The water fittings are Messrs. Fenwick and Co " 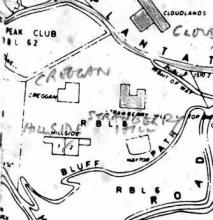