It is shown on I.L. 407, which ran east-west from Nathan (then Robinson) road to Lock (then Garden) road, roughly opposite to the junction with Mody Road.

END_OF_DOCUMENT_TOKEN_TO_BE_REPLACED

K.I.L. 407 ?  It helps to have the correct preface when searching the other gov sites for a lot #.

Many thanks Annelise and David for pinpointing Fairview, Nathan Road, given as the birthplace in 1909 of my father, Charles Reginald Warren, youngest son of Charles Edward Warren of C.E. Warren & Co.. Maybe it was greener then than now! Any photos of the area in that decade very welcome.

Jill, if you're willing to have a look at photos which show that area, you may find something. I'd start with the Map of all Places, and open up one of the other places around this area to see if it has any photos linked to it. Then...

It's not a very direct path, but hopefully it will turn up something. Please let us know if you do find any,

I can't find any photos in

I can't find any photos in the same area at the moment. If it helps,  I've consulted a draft history of the Warren family which says that they lived at Observatory Villas at this time. If that's right, Fairview must be one and the same.

Hi Jill, I've made another Place for Observatory Villas. As you can see, they were still in Tsim Sha Tsui, but some distance away from Fairview.

PS Looking at the notes for Observatory Villas, there was no re-numbering of lots. They just changed the prefix from IL to KIL.

1920s Probably taken from the Kowloon Hotel. The north-south road is Nathan Road. I guess Mody Road is the intersection on the right with the two rickshaws on Nathan Road. The Fairview would be close to the site of the building with the chimney stacks on the left. 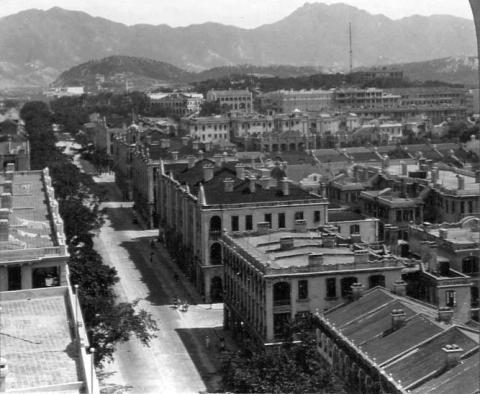 Many thanks for locating these two photos. It's interesting to see the difference that even a decade made at that period!

The Rate Book for 1909 gives 4 Fairview as 7 Nathan Road. Does that make sense? It  gives the Lot no. as I.L 407 and the rate payer for Fairview 1-4 as the Procureur Général in Hong Kong of the Société des Missions Étrangères. The Jurors List for 1909 gives the address of Charles Olson, younger son of John Olson snr., as 4 Fairview, Kowloon. As this is the address on my father’s 1909 birth certificate, that means that Charlie Olson, aged 21 and still unmarried, moved in with his half-sister Hannah and the whole Warren family, including four children, aged 0-9, rather than staying on with his parents – not for long though. 1911 shows him a few doors down at 4 Nathan Road. I don’t think that is the address for Thoresens, for whom he worked. The other members of Aagaard Thoresens tend to give their private addresses on the Jurors Lists. All the younger generation of Olsons, with or without children, seem to have moved out of town at this time – healthier? – less malaria? The Warrens probably lived at 4 Fairview until 1916 when The Towers, Broadwood Road, was completed.

The current address for that location is number 63, Nathan Road, so there has been some inflation since 1909! The road will likely have been re-numbered at least once in its life.

The genesis of Lock Road and the end of Fairview

2) The planned birth of what would be called Lock Road by 1929 (but looking at later photos at least till 1949, the original plan did not seemed to have occurred)

As part of a bigger scheme for the erection of 40 houses and shops some of which will face Nathan-road, others Hankow-road, Peking-road, and a new road which is to be be (sic.) cut from Peking-road and probably through as far as Haiphong-road eventually, a contract has been entered into for the erection of ten houses facing Nathan-road, to be let as shops on the ground floors and three-room flats for European occupation on the upper floors.

The land involved (110,000 sq. ft.) “is that bounded by Nathan-road, Peking-road and Hankow-road, more than half a block to Haiphong-road, and its owners are the Wing On Company.” The plans on which the architects, Messrs. Clark and Iu, and the contractors, Lau Pui Kee and Co., are now proceeding were approved some years ago and it is considered that conditions are now suitable for the work to proceed.

As soon as the ten houses facing Nathan-road are erected – the contract time is ten and a half months and the price, nearly two lakhs – ten houses are to be erected facing Hankow-road, four facing Peking-road and sixteen facing the new road which is to be constructed.

The scheme involves the pulling down of four of the houses comprised in “Fairview” and the houses at present fronting Hankow-road will also have to come down eventually.

The flats to go above the ground floor shops in the proposed new house will have roomy interiors, flush system and modern conveniences.

The end of 1-4 Fairview, Kowloon

No wonder we couldn't find any trace of the houses when we went looking for 4 Fairview in 2004. Thanks for posting this information about the date of the knock-down, David.

Anything pre-1960 in Hong Kong is positively ancient!

Glad to add another jigsaw to the puzzle

First entry found in both juror's list and ladies directory.

Hi Jill, I know this ad for Nos 3 and 4 Fairview on Robinson Road is some 3 and a half years before the birth of your father (by then Nathan Road) but not sure if you investigated when and how the Warrens and Olsons ended up at that address, and this ad might be a starting point into looking at that if you haven't done so. 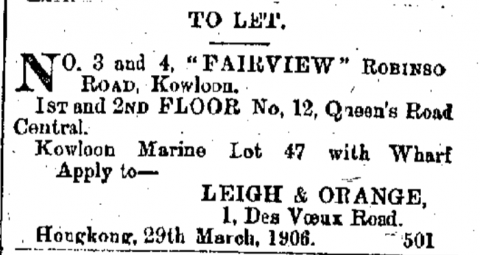 My guess is that my grandfather applied to the agent when the house next became free. I don't know when the family moved from Observatory Villas (also rented). I think that the fact that Mrs Warren was listed at Caine Road between the two addresses  in the Ladies Directory doesn't mean that the whole family moved lock, stock and barrel back in with the Olsons. It would have been a crowd and a lot of moving house in a short period. Trips to Shanghai in addition!

You mentioned earlier that the Warrens probably lived at No. 4 Fairview until 1916. I found an ad for the Letting of No. 4 Fairview, Nathan Road by Linstead and Davis in September 1915. The ad was placed in the papers on 15th September 1915. Presumably the Warrens have vacated the premises by that date. This might help in putting a timeline on your family's movements.

Indeed useful information, thanks David. 1915-1916 was a bit of a jagged year for my family. The September 1915 date chimes with the passenger list record of my grandmother, Hannah Warren sailing to London via Canada in May 1915. Her two elder children were at school in England and she hadn't seen them since 1913. I can't find a record of her coming back until October 1916 when The Towers, the family home in Broadwood Road had finally been completed. She is given as donating separately from C.E. Warren, the "collector", to the Prince of Wales Fund in December 1915, but I suppose that's no guarantee of presence. Now I'm not sure where Charles Warren would have lived with his two small sons between September 1915 and May 1916 when The Towers lease began, unless it was the newly built 13 Broadwood Road which he jointly owned with his brother-in-law, John Olson until May 1916. In the Jurors List for 1916 Etienne Neave gives his address as 4 Fairview Villas.