Her wedding was reported on

At St. Joseph's Church, on Saturday, the wedding took place of Mr. Frederick James Wilkinson, assistant in the office of Sir Paul Chater, and Miss Beatrice Davies. Mr. Wilkinson is the son of Mr. and Mrs.  W. J. Wilkinson of Hongkong, and Miss Davies is the daughter of the late Mr. S. J. Davies and of Mrs. Dennaby, of New Port, Mon. The Rev. Father Riganti officiated.

The bride was given away by Mr. W. J. Wilkinson, of the Hongkong Land Investment and Agency Company, and was attended by the Misses Margaret Williams and Mathilda Pereira as bridesmaids.

The bride was attired in a gown of ivory white satin trimmed with pearl and crystal embroidery and her satin train was trimmed with orange blossoms. She carried a bouquet of white lilies and maidenhair fern.

A reception was held at 25 Praya East, after which the happy couple left for their honeymoon in Shanghai, the. bride's going away dress being a dark blue crepe de chine, trimmed with red and black beads. 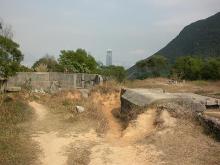