END_OF_DOCUMENT_TOKEN_TO_BE_REPLACED

The Bank of China, opposite

The Bank of China, opposite Oriental Bank, supplanted the building specially erected for the Chartered Bank of India, Australia and China, which on the expiry of the lease was forced to find temporary accommodation in Connaught House, on the opposite side of Queen's Road, pending the erection of their present building.

This is the Chartered Bank Building at 4 Queens Road, completed in 1878. The building is an almost exact match for the 3rd Generation P&O building built on the praya, later Des Voeux Road, in 1887, I believe the design is in the Italianate style. The architects for the P&O building in 1887 were Bird & Palmer (today called P&T Architects & Engineers Ltd). In 1878 a previous iteration of the firm, then named Wilson & Salway built the Chartered Bank Building. A list of major buildings designed by the firm can be found here

By 1878 we had moved to premises at what is now No. 4 Queen's Road, and in 1890, when the lease expired, our nomadic progress continued with a further move to accommodation in Connaught House, on the site of what is now Edinburgh House.

In the 1890s the building was used by the Hong Kong Trading Company Limited. They were general house furnishers according to their sign on the building

Apparently there was a well

Apparently there was once a well at No. 4 Queen's Road Central?

“A WELL TO BE CLOSED.

Mr. F. Browne, Government Analyst, certified that the water obtained from a well at No. 4 Queen’s Road Central was so tainted with impurities as to be unfit for potable purposes and likely to prove injurious to health.” 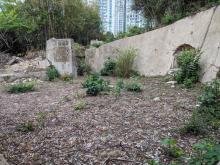