One of Forman's photos shows the steamship Hai-Ching (also written 'Haiching'), likely standing at one of the piers along Connaught Road. 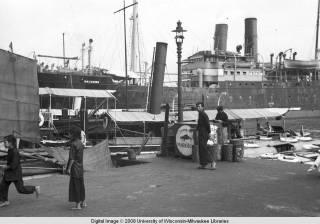 Hong Kong, workers in the harbor, by uwm

The ship was owned by the Douglas Steamship Company, Ltd., though in 1940 it would be requisitioned by the UK government for wartime service.

The Haiching was built in Port Glasgow in 1898. There's an oil painting of the ship, estimated to be painted around 1900, howing how it looked soon after it was built. The ship in the Forman photo looks similar to the painting, but there have been changes, especially to the bridge. Some of the changes may have been a result of repairs needed after it was attacked by pirates in 1929, and set on fire:

The Haiching piracy of 1929 was very reminiscent of the
Sunning. The Haiching belonged to the Douglas Steamship
Company of Hong Kong, and was pirated while on her way from
Amoy to Hong Kong. There were two hundred and fifty deck
passengers and four saloon passengers on board at the time,
and the attack took place when passing Bias Bay, just a few
hours before reaching Hong Kong. The third mate and a Sikh
guard were killed in the first few minutes, but the wireless officer
continued to send out messages for help. The pirates, unable
to get control of the ship, set it on fire; and two lifeboats were
burnt out before their resistance was broken. When British
warships arrived, they helped to put the fire out, and then
towed the Haiching to Hong Kong, where all the passengers were
thoroughly screened. Three of them were charged with piracy
and murder, but one was later freed through lack of evidence,
while the other two suffered the death penalty. Captain Farrar
of the Haiching was awarded the O.B.E. for his part in the case. 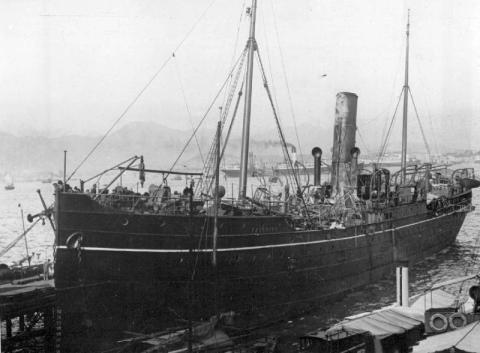 When the Japanese invaded Hong Kong in 1941, the Chinese sailors on the Haiching may have counted their blessings that they were far away. Their good luck was not to last though. On 2nd October 1943, the Haiching was torpedoed by German submarine U-168 in the seas off Bombay (today's Mumbai). The ship sank, and 12 crew were lost from a total of 70.

Many other Chinese men sailed with the British Merchant Navy, and would be killed during World War II. They are commemorated by the Hong Kong Memorial, situated at the main entrance of the Botanic Gardens.

‹ National City Bank of New York up When were the Harrison Forman photos taken? ›

The S.S. Hai Ching is covered in a British Pathe newsreel (without audio) in 1930 after it was attacked by pirates in 1929.

The Douglas SS Co were an important HK shipowning concern; the standard reference works on the HK shipowners up to around 1970, with complete fleet lists, are "Beancaker to Boxboat", which covers the liner companies, and "Sold East", which covers the tramp companies - both written by Kentwell and Dick and published in Australia and now very hard to come by. There is a more recent book written by Stephanie Zarach which covers the history of the HK Shipowners Association and is called "Changing Places" - this is published by the HKSA and is still in print.

Hong Kong Seamen in WW2 (and after)

There is a whole realm of history to be recorded concerning Hong Kong's seamen. So far as I know, no-one has done this, which is a pity because the history is going to be largely oral, apart from the Mardep records,  and it is slipping sway with the last gereration of Hong Kong seamen.

I put the word "Hong Kong" in brackets because they were recruited from seamen's boarding houses in Hong Kong up to the time of the reforms brought in following the UK seamen's strike in the 1960s after which the "pool" system was brought in in HK as well as the UK. (This cross-relates to the mutinies on HK ships during the 1967 riots in HK).  But most of them were not native Hong Kongers. For instance, the China Navigation Co employed engine room staff from Tianjin, deck staff from Shanghai and stewards from Guangzhou (each with their own galley and mess room!)

One snippet that should be recorded in relation to the second world war is covered in an excellent book by (Captain) Tony Lane,  "The Merchant Seaman's War" published in 1990 by Manchester University Press. There was a phenomenally high desertion rate by Chinese seamen from British ships in US ports  for the first years of the war.

This was not cowardice on their part but incredible stupidity on the part of their employers, who had continued to pay Chinese seamen at the pre-War rate of pay (about a quarter that of a British seaman) although their ships were redeployed and no longer called at Chinese ports. This meant that seamen had to stay in seamen's boarding houses in the UK between ships, at UK prices, which they absolutely could not afford. They were simply starving. It took about three years before anything was done about this, at which point, of course, the desertion rate fell back to normal.

There were HK seamen serving the Royal Navy during the '82 Falklands war. Most worked in supporting roles on board such as laundry, kitchen and maintenance dept. 8 were KIA. Their names were Yu Sik Chee, Yeung Swi Kami, Leung Chan, Sung Yuk Fai (or Pai), Ng Por, Chan Chi Sing, Lai Chi Keung, Kye Ben Kuro. They died on the Sir Tristam, the Sir Galahad, the Atlantic Conveyor, on HMS Sheffield and HMS Coventry.

I was visiting HK at the time and remembered some HK seamen on contract refused to sail with the departing RN. They claimed they did not sign up to go to war for the Queen's navy.

My Uncle Frederick Charles Duxon was also awarded an MBE for his part in helping to stop this act of piracy.  He went to Hong Kong as a young man (an apprentice).  He married a local girl.  He died in 1953 and this is also recorded on this site.

I enjoyed reading the article about the S.S.Hai-Ching.

I have just tried looking for the newsreel that you speak about - and have had no luck.

First video on the top: "Epic of British Bravery". No audio.

Thank you for yoyr help - my Uncle was awarded an MBE - He was chief engineer on the ship.

Events of Piracy in Bias Bay

Piracy on the China Coast can be read here

Where to find Hong Kong's history