1952 View down the Peak Tram line and over Central

Where: We're looking straight down the Peak Tram line, which suggests the photographer might have been taking this from the front of the tram. But look closely and you'll see why that can't be true... We can see the tram in the distance, just in front of the second bridge. It's more likely the photographer was standing on the bridge where May Road crosses the tram line. There he could set up his tripod, and get a sharper shot.

In the foreground is a low building with a dark roof. That belonged to the filter beds, which are just out of sight on the left. Next look up and across to the right. You'll see the Bowen Road bridge, and just beyond that is a building with rows of flower pots on its roof, and a very inviting, shady verandah. That's number 5, Bowen Road, and happily it's still standing today.

Now look down the tram line, past the tram and under the Macdonnell Road bridge, and you see the back of the Helena May building, set at an angle to the camera. They've got the awnings down to keep the sun at bay.

Behind that are a couple of flat white roofs. I'm not sure exactly what they are, but I'll guess they're related to the construction of the East Wing of the Central Government offices, which would later stand on that site.

Next we see the Cathedral's tower, and beyond that the Bank of China Building. Today it's called the 'old' Bank of China Building, but here it's shiny and new (compare it to the rather grubby looking HSBC building on its left). The open area to its right is the cricket pitch, today's Chater Gardens.

The strip of buildings beyond the pitch remain much as they looked when they were built,  around the start of the twentieth century. The exception is the blocky building with the aerials on top. That's Electra House (later called Mercury House), which was also finished around the time this photo was taken.

Who: Who indeed - I can't find anyone to talk about in this photo. From the shadows it looks to be shortly after noon. Is everyone at lunch?

When: Electra House was finished in 1950, and the Bank of China building in 1951. I'm guessing this was taken shortly after, say 1952. Corrections welcome!

At the 4 o'clock angle of the

At the 4 o'clock angle of the two flat white roofs, across the tram track, is a shaded roof with a cross on top, flanked by two towers.  That is St. Joseph's College.  If I remember right, it would later expand in 1963 to include a box-like building to the north and east.

Edit: Goodness me I did remember wrong!  The new building is on the south side, not north.  The two towers in the photo belong to the building on the north side.

As two trams run on the line, it could have been taken from the other one, but agreed, it's more likely taken from a more stable platform.

Breskvar, thanks for the extra information. If you zoom right in there's lots to find - I like the view of Queen's Pier, just visible next to HSBC. Also the Green Island cement factory billowing smoke over in Hung Hom.

Adam, don't forget the two trams go up and down in synch. If the bottom one is this low down, the top tram should still be up on the top section before the bend in the tracks. Or if it's already this far down, I'm not sure the photographer would be thinking about his camera!!

A couple of comments received by email. The first from Harry:

The ship could be HMS Belfast she was in Far east early 1950's and came into Hong Kong when I was there,have gone to HMS Belfast site and almost 99% in favour of that being her.

The picture brings back more memories was looking for cheerio club can't see it.

Thanks Harry, looks like you're right with HMS Belfast. I found this photo of the ship in a similar profile, and it's a match.

For the Cheero Club, if you zoom right in, then look between the letters 'c' and 'o' of the watermark, you should see a white patch that is the Murray parade ground, and behind that the low huts that I believe housed the Cheero Club.

There's one other building clearly visible: the not particularly beautiful Zetland hall, No.1 Kennedy Road - the Masonic Hall.  It is to the right of the tram line, the first building one can see that is immediately to the right of the track.  The foundation stone was laid in April 1949 and it was opened in January 1950.  In your photograph you can see the front door with a small dot above which must be the 'square & compasses' insignia.
This building replaced the attractive Palladian-style 1865 building in Zetland Street (actually an alley between QRC and Ice House Street) which was bombed by the US - collateral damage! - during the war.

Thanks Mark. We've got some photos of the older hall here, and I've just made a new place for the current hall, and added it to this photo.

Albany filter beds are not in

Albany filter beds are not in this photo.

re: Albany filter beds are not in this photo.

Well, it depends how you want to define that Place. My idea was that the building in the foreground of this photo was quarters for the Albany Filter Beds, and could be considered part of them. You can see them right next to the beds in this 1920s photo: 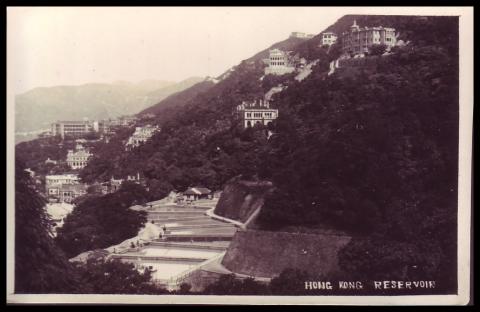 But your call - should that Place only be used for photos that show the beds themselves? If yes, I'll take it off this photo.

Notes from Stephen Davies, that fit in with the 1952 date:

She's HMS Belfast on her 1949-1952 period in HK rather than the later 1959-1962 tour. The diagnostic is the foremast, which is still a tripod. Between 1956 and 1959 the ship underwent a massive refit which included making the foremast a trellis mast. So that is an instant diagnostic for any Tamar images showing the Belfast.

The Belfast was one of the two last vessels of the ten strong British town class cruisers (the other was the ill-fated Edinburgh) that had been lengthened such that the forward funnel was distanced aft from the forward superstructure. That too is an instant diagnostic, so one always knows one is looking at the Belfast. 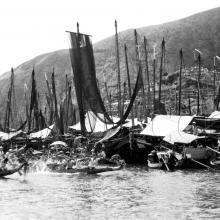 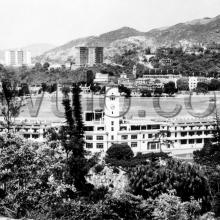 1950 Control Tower Used by the Japanese During WWII