c.1935 View of Hong Kong from the harbour

Where: No trouble identifying where this one was taken, but as we'll see later, pinning down the date is a bit more tricky.

What: The left edge of the seafront looks rather blurry, but we can just see the white tower of the Gloucester Building, peeping over the old General Post Office.

Move across to the 'u' in the watermark where we come to the first of two junks under sail, and just to its right is the blocky Fire Station building: Below the 'o' there's one of the old passenger ferries sailing along. No sign of any star on its funnel, so this is one of Hong Kong & Yaumatei Ferry's boats.

A bit further across to the 'c' and you'll notice a small white building, with a pier in front and a ship tied up alongside. Maps from the time [1] describe it as the "Osaka Shosen Kaisha Wharf", and pre-war photos show the building marked "O.S.K' :

Next comes the second junk. Look at the top of the sail, and follow the line of the top spar, pointing to 2 o'clock. You should see a building with a dome at one end of the roof, and two round towers. That's the Ohel Leah Synagogue on Robinson Road, which is still standing today: Scroll back across to the left, admiring all those mid-levels buildings with their unobstructed sea views, til you come to this building: 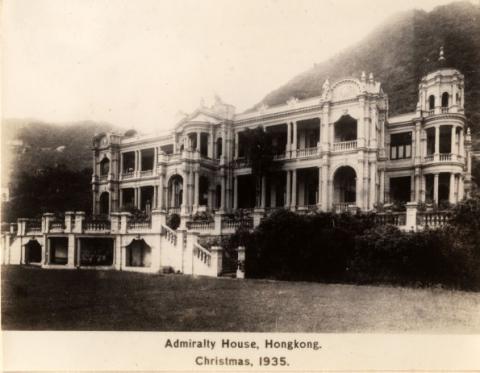 It was built as Sir Paul Chater's residence, and he knew it as Marble Hall. Chater's will granted the building to the government, though his wife continued living there until her death in 1935. After that it became Admiralty House. And since no sailor could feel at ease without a mast nearby, you'll see the main photo above shows they'd put one up in the garden.

Who: There's no-one to see in the photo, but for a change we know a little about the person who bought it: 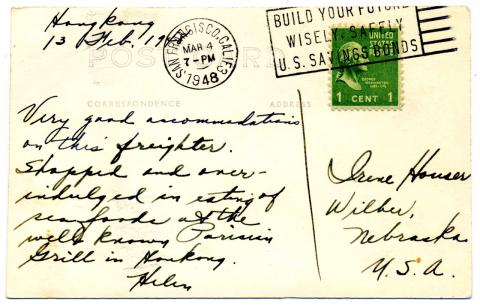 When: So when was the photo taken?

See the junks' sails?  They look brand new. In 1948, Hong Kong was still recovering from wartime, and resources were tight. In other photos I've seen from this time, a junk's sails typically looked like a patchwork quilt, and often had as much hole as sail!

Next, look back at the OSK wharf, and from the funnel marking [2], it looks like an OSK ship is tied up there. But Osaka Shosen Kaisha was a Japanese shipping line. I don't think they'd have had a business in Hong Kong so soon after the war.

I found a Hedda Morrison photo [3] that shows a similar view, and is known to date from 1946-7. At first I couldn't find anything conclusive, but compare these views of the slopes above the Botanical Gardens, top shows this photo, bottom shows the Hedda Morrison photo: 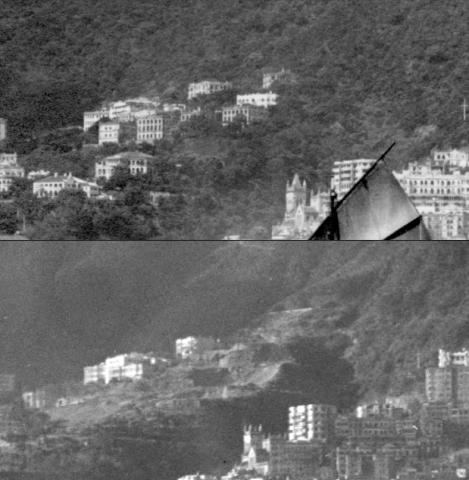 Look at the number of empty plots in Morrison's photo, where there were still buildings in the top photo. Also note the tower that stood next to the Roman Catholic Cathedral, complete in the top photo, but missing its roof in the Morrison photo.

All the signs point to a date before the fighting in Hong Kong, probably around 1940.

Which raises another question - where did these postcards came from after the war? Did the photographers manage to keep a stash of negatives safe throughout the occupation? Any ideas?

Permalink Submitted by marlowe on Fri, 2011-09-09 19:44.
Hi David, the buildings above the botanic gardens are Queens Gardens etc, we know they were demolished in 1937, and the apartment building "Abermor Court" was completed in 1931. I saw another one of those postcards with a postal date of 1937. Alun

As the Gloucester Building Clock Tower (built in 1932) is visible and as Marlowe says that Queens Gardens has not been demolished, you may be looking at 1935 as an approximate date. 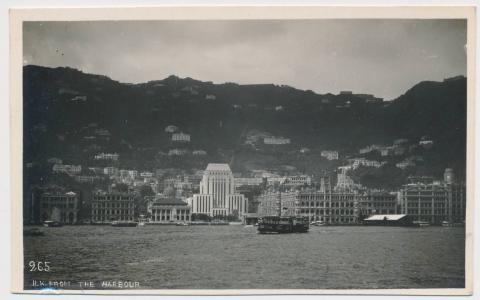 Which leads on to this, the photographers have to go out and shoot new images when something big and obvious changes, like the HSBC ;-).

So I believe in 1935, a photographer went out and shot several images (maybe from a boat?), this one of central, and another one of the area to the west - there may be others.

Check the title in the bottom left corner of the 2 images, the handwriting looks the same to me. 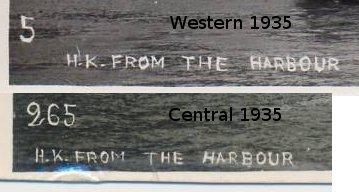 Moddsey & Alun, thanks very much for the extra detective work. The 1937 date for Queen's Gardens is a useful one, so we're looking at 1937 or earlier. The 1937 article about their demolition also says "two of the houses were pulled down about two years ago".

I think Queen's Gardens had five houses in all: two arranged north-south, and three east-west. All three E-W are still visible in this photo. Possibly one of the N-S pair had already been demolished (see this 1906 view for comparison), or the second of the pair may just be out of sight. In any case it pushes the date to "about two years ago" from 1937.

That links in neatly with Alun's idea of the photographer heading out to update his collection of stock views, so I'll go for 1935 as the date.

PS Do the backs of either of your cards give any idea of the photographer / publisher, or are they the very plain "correspondence / address" backs like this one? 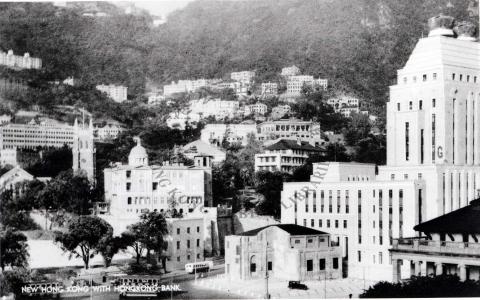 The back of the postcards give no additional information.
Alun

Dr Stephen Davies of the Maritime Museum suggests a slightly later date, based on the direction of travel of the ferry in the photo:

However, the double-ender [ferry] is coming from the WEST not Hung Hom (where the early services worked to/from).

HYF didn’t complete the building of the Jordan Rd. pier until 1933 – but that was for vehicular ferries - and didn’t get the franchise for working ferry services to Lantau, Cheung Chau, Castle Peak, Tung Chung, Tsing Yi and Tsuen Wan until 1938.

My hunch is therefore that this photo dates from sometime around 1938/40.

1940s View of Hong Kong From The Harbour

I also have a print of this but only 3 inches by 2 and a quarter inches in size. It an original photographic print not a postcard, and is tightly cropped either side of the Junks. I acquired it from the widow of a gentleman who had been with the RAF in Hong Kong during 1935-36. Although this one is not annotated others from the same batch have 1936 hand-written on them. Presumably as surmised by others the view must be dated within this period.

re: 1940s View of Hong Kong From The Harbour

IDJ, thanks for the extra confirmation on the date.

I've also had an update from Stephen that HYF ferries were running between Sham Shui Po and Sheung Wan since the 1920s, so that doesn't contradict the 1935-6 date we seem to be settling on. 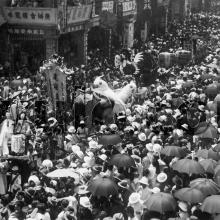 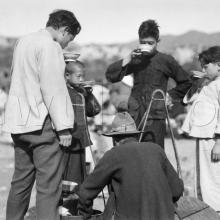 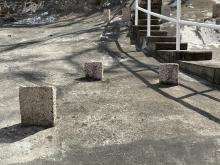