When: King Edward's birthday, the 25th of November, 1909. This auspicious day was chosen to unveil the latest additions to Statue Square: statues of his wife, Queen Alexandra, and his daughter-in-law Mary, the Princess of Wales.

Where: We are looking out from the Supreme Court Building over the square to Prince's Buildings on the left, and Queen's Buildings [1] on the right. The court building wasn't completed yet, but there was enough built to give the photographer this good vantage point.

What: The stars of the show were the new statues, described in detail by the day's newspaper [2]. On the left is the Princess of Wales' statue, paid for by Mr H. N. Mody. He was proud that it was the "very first statue of our Gracious Princess that has as yet been erected": 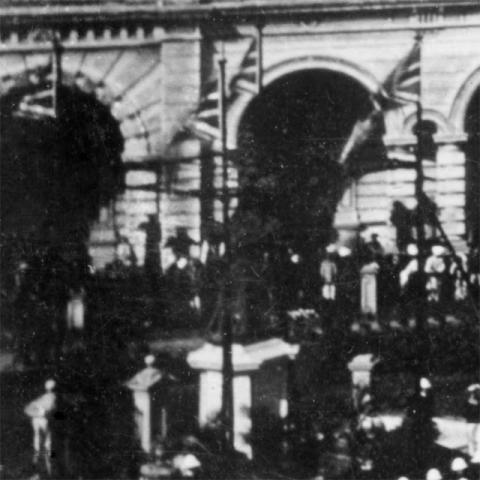 Queen Alexandra's statue is across to the right, and was funded by money contributed to the Coronation Fund eight years earlier: 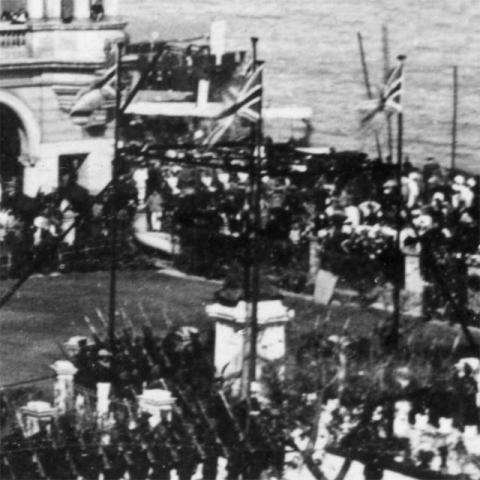 The newspaper noted that:

Around the statues which were to be unveiled had been erected a sort of canopy, at the four sides of which stood sailors and marines, ready to raise the four Union Jacks when the cloud of canvas had been withdrawn by the Governor.

In this photo both statues' canopy (a canvas screen) has already been removed, and the four Union Jacks are flying. I've seen another photograph [3] taken a little bit earlier by the same photographer. It shows the screen still raised around the Princess of Wales' statue.

Who: The majority of people in the square were soldiers and sailors - the reporter estimated 1,500 altogether:

The 13th Rajputs were stationed around the pedestal of Her Majesty the Queen's statue; the 105th Rajputs occupied the space between the statues of the King and the Prince of Wales; a company of the Buffs surrounded the statue of Queen Victoria, (...); 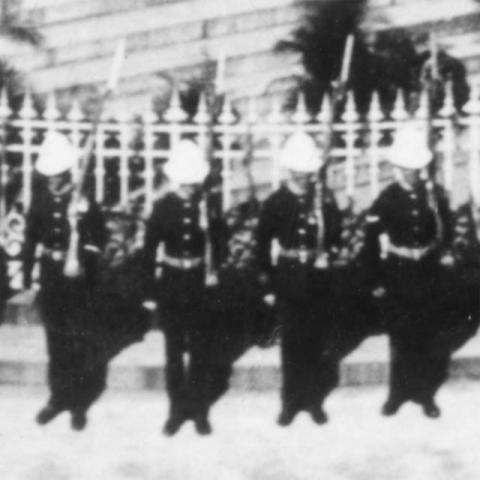 two companies of the R. G. A. were drawn up at the entrance to the square; the Royal Engineers were stationed against the statue of the Princess of Wales, and the Hongkong Volunteers stood facing the Queen Victoria Jubilee Memorial.

It left little room in the square for local residents who wanted to watch the ceremony. The newspaper again:

The adjoining buildings were in the possession of loyal and patriotic citizens who could be seen at every window, and those crowded out found a vantage ground on the lofty parapets away up in the sky.

Here are a few of them, casually dangling their legs over the parapet, four storeys up! 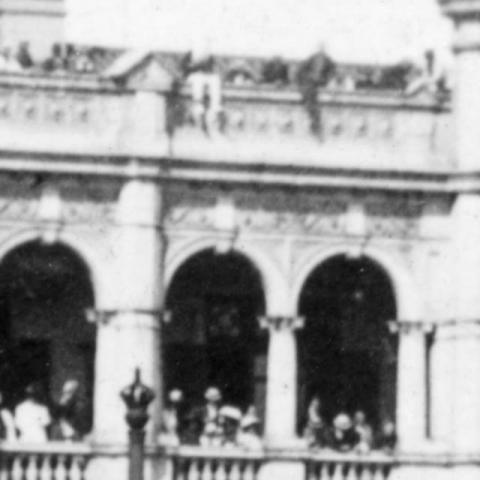 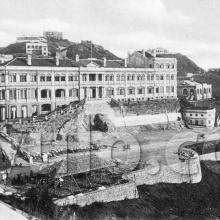 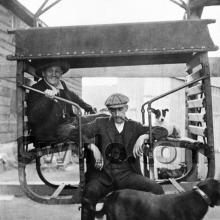 Central, over to Kowloon from the Peak tram