Here is another "swimming" photo to comply with David's request. It's one of several of the Warren family taken on Stanley beach in the 1920s and 30s - this time my uncle Leslie Warren and his wife Cicely. I'm baffled as to why they chose such an uncomfortable place to sit for this photo when other photos show plenty of sandy stretches. The road from Windy Gap to Cape d'Aguilar mentioned by gw that was started in 1929 and then restarted in 1933 is visible behind the couple in its second state, as this photo would have been taken around 1933 or 1934.

Initially I suspected that this stoney beach may be Hairpin Beach, situated a few minutes walk to the north of Stanley Main Beach. However, a site visit confirmed it was not. Another possibility is the beach on which the ruin of Pillbox 27 still stands (www.gwulo.com/node/19308). It's definately very rocky, but unfortunately I've lost my photos of it so can't do a detailed comparison.

Two more photos of disparate quality coming up of "stony beach" that I wouldn't have otherwise posted but for gw's kind field trip to try to identify it. As these 1920s photos are taken from different angles there may be a good chance of recognising the background landscape. 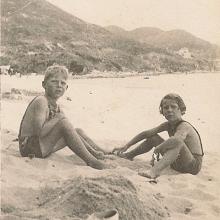 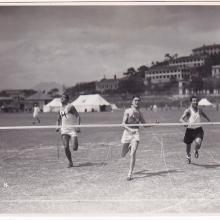 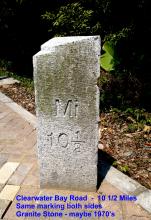