Looking East across Western Street. The Building on the left is Balls Court. The building in the centre is possibly an extention to the school. In the foreground is a Roman Catholic Chapel on the current site of Kings College. Upper right of the picture is Craigellachie

Yesterday afternoon His Excellency the Governor opened the new wing of St. Stephen's College, Bonham, Road... The building forms a splendid addition to the whole college, and is at the west of the original block, with an entrance in Western Street. One of the most noticeable additions is perhaps the large lecture room... Masters' rooms have been included... Messrs. Denison, Ram and Gibbs are the architects. A very pleasing feature about the addition is that it has been erected by subscriptions from parents and guardians of children attending the college, and the donations exceed $30,000.

I find it very interesting that the style of this new wing was exceedingly similar to that of St. John's Hall right opposite to HKU Main Building, completed in 1912 and designed by the same Messrs. Denison, Ram and Gibbs. Similar features included the two towers at the corners of the southern facade, as well as the rhombus-shaped window frame. See here for a view of St. John's Hall.

A similar rhombus-shaped window frame can also be found in the Helena May (though the rhombus there was circled to form the shape of a coin). See here. The Helena May was also designed by Messrs. Denison, Ram and Gibbs, and completed in 1916.

The towers on the building at St Joseph's below Kennedy Road are similar too, as though that was the fashion for schools at the time.

David this is so true indeed!

David this is so true indeed! St. Joseph's tower block was built in 1920, so it was also around the same time.

Hi - is it possible to use this photo for a pamphlet I'm writing to celebrate the 70th anniversary of St Stephen's Chapel?  Thanks!!

Yes, feel free to use this

Yes, feel free to use this picture 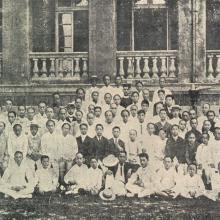 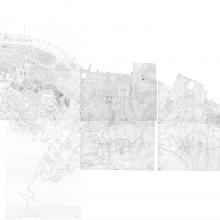