The was the original Hotel back then.  Low rise, high ceiling, with tiled roof.  Now it had become a shopping centre with restaurants, a Wellcome supermarket and various small shops.

END_OF_DOCUMENT_TOKEN_TO_BE_REPLACED

The website of the current 'The Repulse Bay' development says:

A typical Hong Kong tragedy. Hong Kong and Shanghai Hotels (owners of Peninsula Group and controlled by the Kadoories) demolished the hotel in 1982 to build blocks of flats as property prices rocketed. Protests about knocking down such a elegant piece of Hong Kong's history were ignored. The bubble burst after demolition and the site was left sitting empty. For some reason (books vary on the motivation), the main hotel building was eventually rebuilt a few years later as part of the new development when prices recovered. But it's just a fake.  On the development's web site they say:

Some irony! HSH, who tore down the building and reportedly auctioned off the contents, still own the site.

that's HK heritage preservation for you

By the way, didn't they rebuild it at two thirds scale? I read it somewhere (or did I dream it?) :-)

And I'm sure they'd tear it down again if someone offered them the right price.

This 1948 photo from Life magazine shows how the hotel dominated the beach; I think the beach huts belonged to the hotel as well.

Interesting to note the statue of the World War I 'Tommy' soldier in the grounds of Eucliff (foreground). Later the statue would be used to commemorate John Osborn of the Winnipeg Grenadiers, who was posthumously awarded the VC after dying on Jardine's Lookout during the defence of Hong Kong, and stand outside Osborn Barracks. It was moved to Hong Kong Park, where it still stands, in 1992.

Incidentally, the buildings in the very foreground are still there; presumably a garage before and housing a car showroom now. Should that be given a separate listing? Also the terraced steps leading down to the beach remain

New place created for the garage.

80sKid - You may be interested to know that the '"statue of the World War I 'Tommy' soldier " was brought from America by the Eu family, and depicts not a Tommy but a dough-boy.  I suppose it's fair enough that it is now used to commemorate Osborn who was Canadian (but born and grew up in the UK).

After the war, my grandmother Elvie Shuster, widow of Fritz Edward Shuster, worked at the Repulse Bay Hotel and also the Peninsula Hotel, where she and my mother and uncle lived until they came to Portugal.

According to my grandmother, she was what I would call the head of staff in both these hotels.

It was at the Repulse Bay hotel where she met her second husband -Colonel E. C. Fredericks (Freddy) with whom they moved to Portugal.

I wonder if anyone would have any recollection of her or even of my Mum, Edwina Shuster, who would be in her teen years, at the time.

Have you tried contacting the Hong Kong Heritage Project?

They hold the archives for both those hotels, and should also be able to tell you if there is any ex-staff association you could contact. Either of those may hold more information about your grandmother.

that's HK heritage preservation for you

Thanks David, for the tip.

I have emailed them and am still waiting for a reply. Will let you know if here are any findings.

The hotel opened on the 1st

There's also a description of the new building on page 4 of the Hongkong Telegraph, 23rd Dec, 1919.

My name is Alfred Sung from HK. My grandparents and parents were from the Repulse Bay Hotel. They have spent most of their years (from 1959-1982) at the hotel and once lived at the hotel's Gate House with the Portuguese manager and his family. My dad always told me the story of the Portuguese family who lived on the upper floor of the Gate House (my dad lived on the ground floor) and how he made friends with the little brother and sister upstairs. I remember he mentioned a girl named Sandra. Do you have any clue?

I am afraid that wouldn't be my grandmother or my mother and uncle since they left HK to come to Portugal in 1953 :(

I just checked with my dad

I just checked with my dad and he said the Portuguese manager he knew took up the post after the elder brother resigned resigned from that post. He could remember names like Bobby, Sandra, Dennis and James. These are the Portuguese RBH staff that he knew. 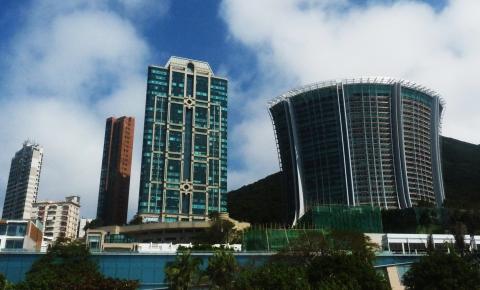 But some things remain unchanged - almost ! 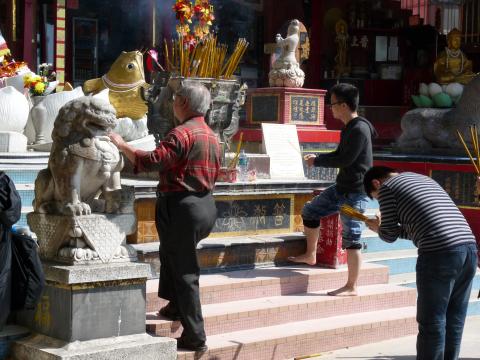 I note with interest 80sKid’s comments dated 14 June 2010 and I fully concur with all he says. I think it worth noting that the Hong Kong & Shanghai Hotels Group, controlled by the Kadoorie family, were at one time planning to pull down the Peninsula Hotel which they also own.

An agreement was reached with the HK Government whereby the Group were allowed to build the 2 large towers behind the existing hotel, in return for keeping the latter.

But let us be in no doubt that heritage counts for diddly-squat in this city. The almighty dollar will always come first.

i have just been re-reading the comments on this page, (always an interesting pastime!), and I would like to pick up on the one made by Jaberu above on the statue in HK Park.

I fully agree with all that has been written about how it used to belong to Eu Tong Sen and it stood in the grounds of his mansion “Eucliff” in Repulse Bay. I also concur that it commemorates CSM John Osborn V.C. of the Winnipeg Grenadiers. But Jaberu’s assertion that the statue is of an American WW1 “Doughboy,” and NOT a British “Tommy,” is the one and only time I have heard of this theory. I would like more information, if possible.

My understanding is that Mr. EU had a “thing” about statues and that he bought this one on a visit to the U.K. between the wars. He brought it back to HK and to Eucliff where it stood in the grounds until the estate was sold to developers - long after his death.

It was then presented to the British Army - as it was a statue of a British “Tommy” - who placed it outside the guardroom in Osborn Barracks where it stood for about 10 years. It was presented to the HK Government when the British military relinquished Victoria Barracks and part of the latter became HK Park. The idea was to retain a link between the Park and the fact that it had once been part of a British Army barracks from the very earliest days of the Colonial period.

One is tempted to think that the British Army would have done their homework when first offered the statue many years ago, and would have gracefully declined the gift if it was not, in fact, the statue of a British soldier, but rather an American one.

But I am open to persuasion.

It looks like the US uniform had a Nehru-style collar. However, it's difficult to tell from the statue what style it is.

The hotel was opened by

The hotel was opened by Governor Stubbs on 1st January, 1920. The opening was reported on page 4 of The Hong Kong Telegraph, 1920-01-02, which noted the architects were 'Messrs. Denison, Ram, and Gibbs'.