Where: A couple of religious buildings pin down the photo's location. First we can see these two towers on the skyline: 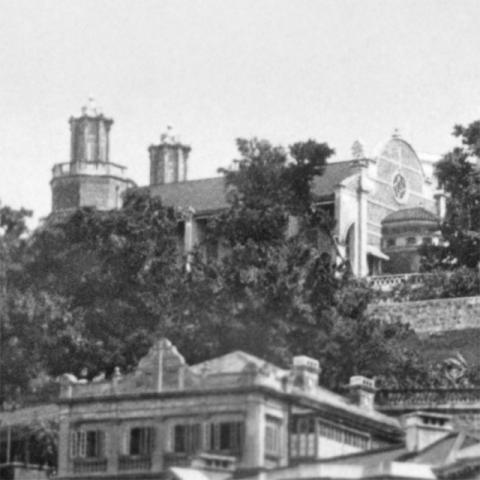 They belong to the Ohel Leah Synagogue [1] on Robinson Road.

Then over on the right of the photo is a curved staircase: 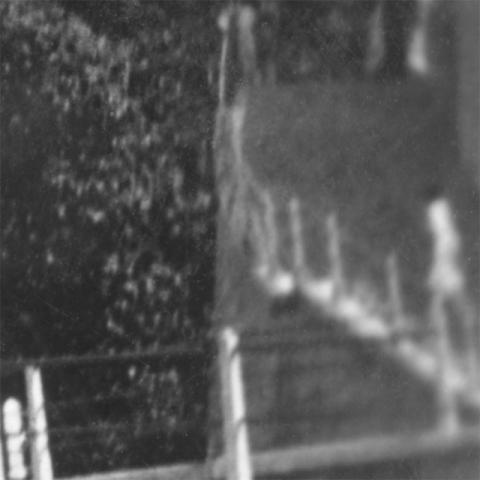 That's still with us too, and leads up to the Hop Yat Church [2].

So the photographer is standing below the four-way junction between Caine, Seymour, Bonham and Hospital Roads. Here's a marked-up copy of the photo to show the roads in the area (click image for a zoomable copy): 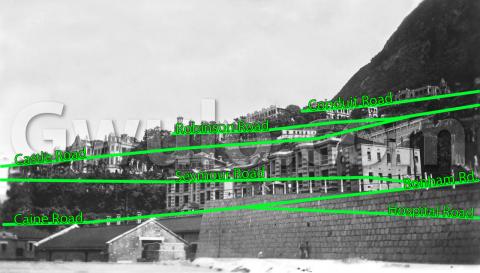 Who: We can't see them, but there should be plenty of policemen nearby. The three stripey buildings in the centre of the photo were their quarters [3],

and Number 8 Police Station [4] wasn't far away, along on High Street.

There are also a few children playing at the base of the wall: 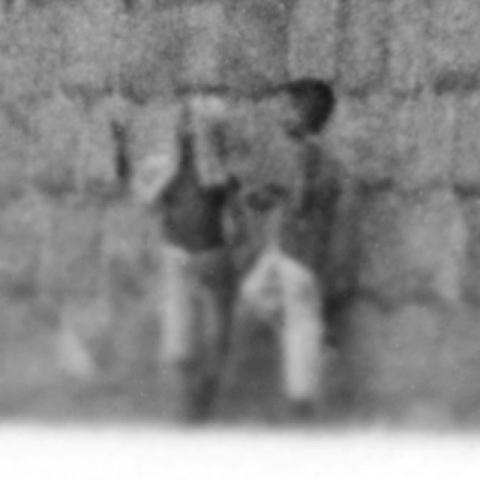 We'll talk about them again when it's time to date the photo.

What: How many of the buildings can we recognise? 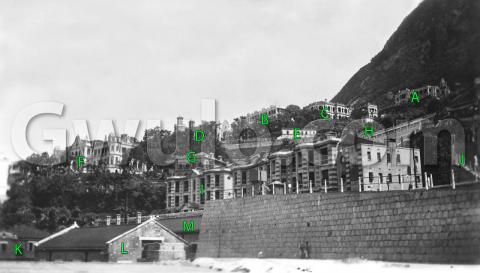 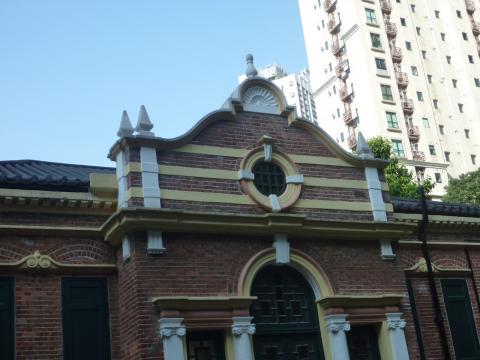 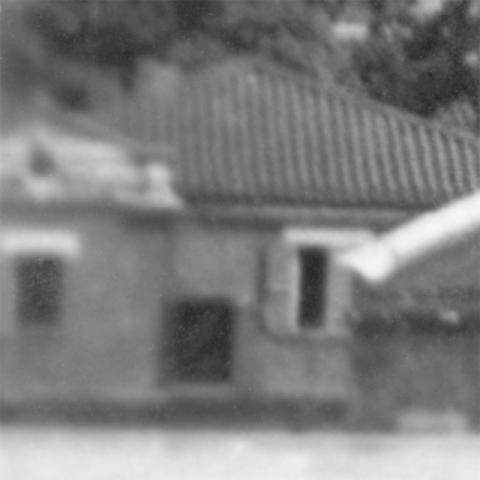 If you can identify any of the other buildings A, B, C, F, G, K, L or M, please let us know in the comments below.

There's also a group of smaller structures that are worth a closer look. They're at the top of Hospital Road: 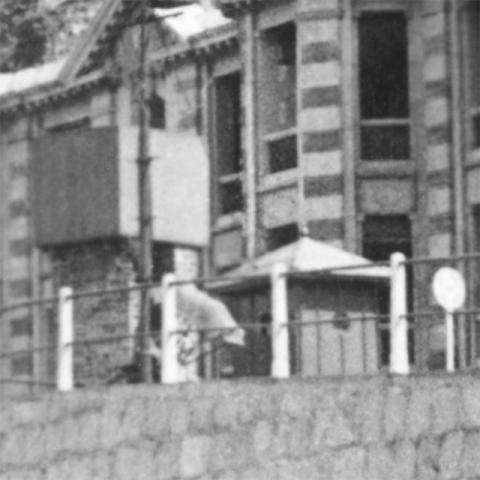 On the right is a round sign, but I can't make out the writing. Next is a small structure with a roof and round windows. Some sort of watchman's hut perhaps? Then there's a rickshaw, tilted over with its handles down on the ground, waiting for a customer. Finally there's a tank up on brick supports [7], probably a water tank of some sort.

The tank caught my eye because for years I've seen an old, rusty iron tank just here, and wondered what it was. Here's how it looks today: 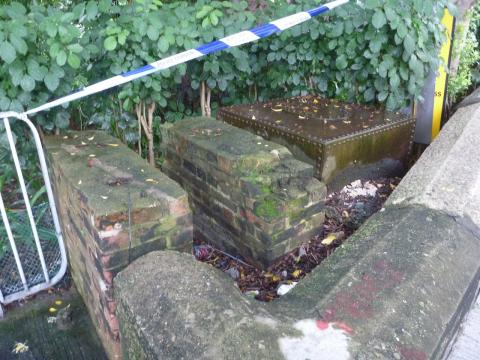 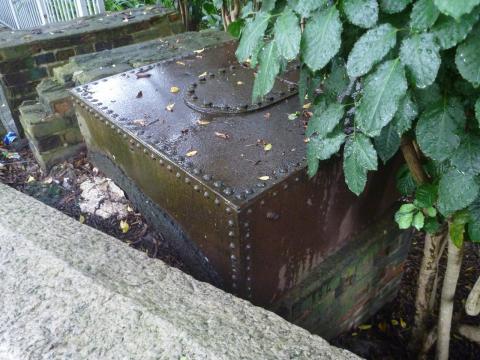 Perhaps the tank in the old photo stood on the brick supports to the left of the tank we see today? If you know anything about its history, please let us know.

The only other remnant I could find from the 1920s is the wall along the north side of Castle Road. It's visible below the synagogue in the old photo, running across the middle of this cropped section: 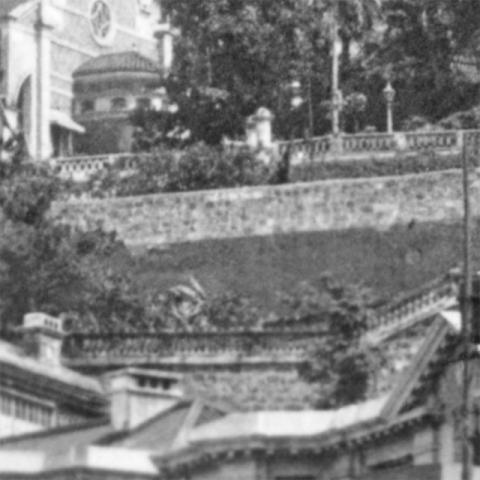 Here it is today, looking up from Seymour Road: 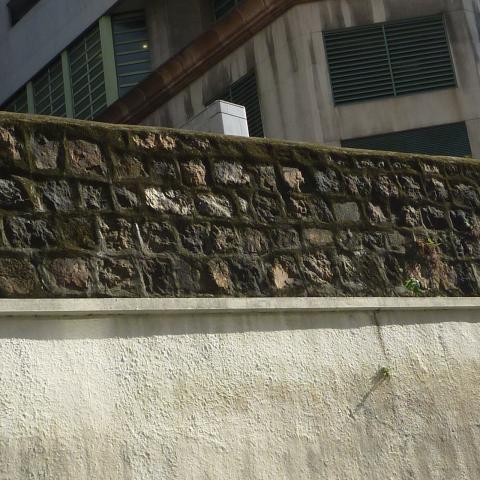 When: This photo comes from an album described as "1920's". The seller didn't give any other information about the owner or when & why they were in Hong Kong. There are some other photos from the album I'll post up, so hopefully over time we'll be able to narrow down the date they were taken.

To start with I'll say they were taken in the second half of the decade. Those children give us the first clue. The photographer is roughly where St. Anthony's School stands today. In the early 1920s the second Number 8 Police Station [8] stood there, though it was demolished in 1925. I guess that the children wouldn't have chosen the land next to a Police Station as their playground, and also the ground they're standing on looks like it has recently been cleared. So I think the foreground is the old Police Station site, taken some time after 1925.

The other clue is the staircase. The Hop Yat Church opened in 1926, and if the staircase was built at the same time as the church, the photo shouldn't be any earlier than 1926.

There's a small chance the staircase pre-dates the church, as there was an earlier building on the site. Here's a better view of the retaining wall and staircase: 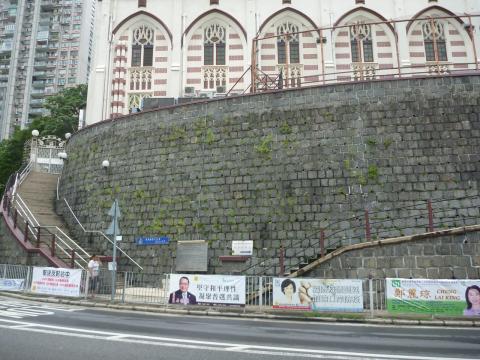 Do we have any wall experts reading who can recognise its style and estimate when it was built?

The photo is much wider than it is high - a 7:4 ratio of width:height, vs a 4:3 ratio for a photo from typical modern compact digital camera. All the photos in the album are this shape, and I have other old photos in my collection the same shape. If any readers know about photographic history, can you tell us anything about this film format, and when it was popular?

You can see that the camera struggled to fill such a wide negative - the centre is photo is clear and sharp, but it gets blurry as you reach the right or left edge.

Could you measure the picture exactly, so we can narrow it down, there are dozens of formats that are similar, but different widths.
If the image is 2.5 X 4.25 inches, then it may be 616,
but if the image is 2.25 inches high, it's probably 120.
Alun

It's amazing that the film was stil for sale until 1984. Originally I had the idea that knowing the type of film used could help date the photo, but looks like that's not the case.

Thanks for the tips. Using your numbers I found a couple of sites listing the old Kodak films:

Given that the photos match the size of the negatives, were they made as simple contact prints?

The Police Quarters were located on 150-156 Caine Road for senior officers.  I recall the year '1920?' etched below the roof of the easternmost block. Hop Yat Church and its staircase and Hospital Road can be seen from the photo below. 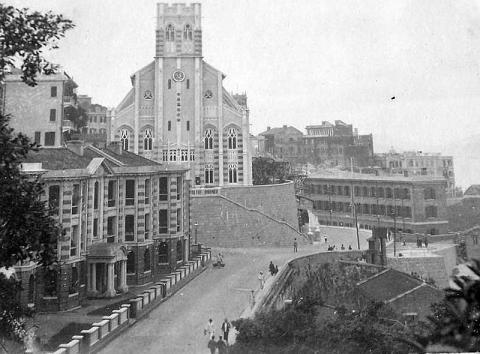 Thanks for this, it's an

Thanks for this, it's an excellent comparison view. It also shows the iron tank and hut that were in the original photo, and the big retaining wall below Hospital Road.

From this new angle we can see more of Hospital Road, including #4 Hospital Road that is still standing today.

Identification of buildings in photo

Building L belongs to the cluster of buildings making up the Disinfecting Station which is on the West side of Caine Lane, with its back towards the top of Hospital Road.  You can read a bit about it in the book 'The Taipingshan Medical Heritage Trail' published by the Hong Kong Museum of Medical Sciences Society and available for sale in the Museum at an incredibly cheap price.

Building K lies on the opposite side of Caine Lane, and is most likely part of the original Laboratory Animal block of the Bacteriological Institute. It made up one of the 3 buildings making up the BI and was pulled down in 1983 and in its place lies part of Caine Lane Garden at present.

Thanks for locating this photo.

Thank you, that's two more. Others have been identified in the comments at: http://gwulo.com/atom/18052 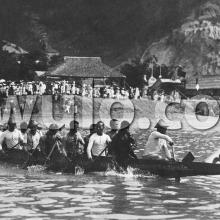 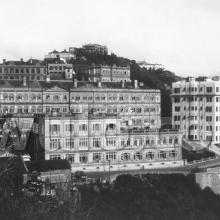 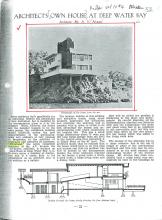