Grateful for confirmation that this really is Stanley Bay. Left to right are Cicely Warren, Leslie Warren, Laura Dransfield, Albert Dransfield. Dorothy Dransfield kneels at the front with Leslie and Cicely's children. My thanks go to a Gwulo colleague for enhancing this photo for me.

Yes, this is the view from Stanley looking east across Tai Tam Bay. Here's a recent view showing the same skyline:

Thanks for the confirmation, David - useful, as I have several photos  taken at different angles showing the mouth of the bay. Googlemaps tell me that the link to the recent view that I tried to access is "unsupported". I expect that's because I haven't got some app or other.

See if you can see the same view from the screen capture of Google Street view.

Thanks breskvar. The skyline looks less bumpy in the recent view, but it must be the same. I'll dig out some similar 1920/30s pictures of that arm of the bay when I have time, if that's not too boring for everyone.

Here's a bit more of a close up taken from Stanley Beach across Tai Tam Bay with D'Aguilar Peak in the middle and Cape D'Aguilar on the right. Hope it's bumpy enough! 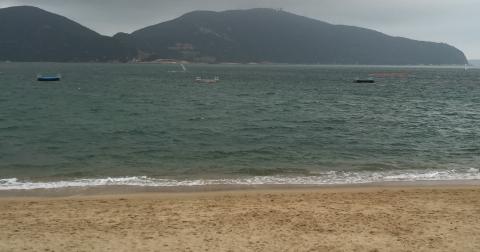 View from Stanley Beach to Cape D'Aguilar, by gw

Your photo shows a light coloured line running almost horizontally along the opposite peninsular. It's easy to see on the left and above the heads of the people. It's the line of the road that runs from Windy Gap above Shek O down to the tip of Cape D'Aguilar. It was built in stages, with the first stage of 2,700 feet constructed in 1929 and 1930 according to the Reports of the Public Works Department for those years. After that they took a break until 1933 when the tender for the second stage was issued. The line of the road is very faint to the right of the group of people so I'm wondering if your photo was taken during or after the construction of the first phase, i.e. from 1929, but before the construction of the second phase, i.e. 1933 or later? The very faint line of the road on the right side of the people may be a footpath that predated the road.

Please be assured there are many people who visit this site, myself included, who will enjoy any other 1920's & 30's pics you can post. Thanks for this one.

The road from Windy Gap to Cape D'Aguilar

Thank you for the nice comparison photograph of Stanley Bay. I had wondered what might have become of the road. When comparing the little girl (my cousin Diana Warren) with my own three year-old grandson, I estimated her age as two to three. She was born 29 December 1926. The date of the photograph is therefore likely to be 1929, rather than 1933.

Thank you too for your kind encouragement to post family snaps. They're mostly not good quality, I'm afraid. I'll see what I can find that might be of interest. There's certainly some fetching swimwear! 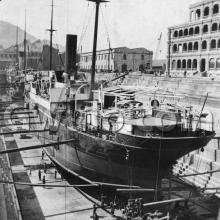 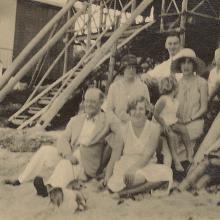